Mary Dorothea Shore – a life brought out of the shadows

Mary Dorothea Shore was the first wife of East India Company supercargo Thomas Shore whom we met in a recent post. She has been overlooked in narratives of the Shore family and so I should like to bring her out of the shadows.

Mary Dorothea was the daughter of Robert Hawthorn and his wife Dorothy, baptised in London at St Sepulchre Holborn in August 1709. Robert was an apothecary who had served as a surgeon’s mate on HMS Ranelagh.  He died when Mary Dorothea was a baby – his widow was granted probate of his estate in October 1710. 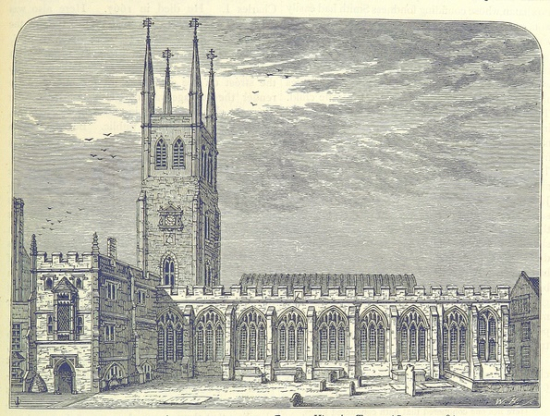 Dorothy Hawthorn then married an officer in the East India Company’s maritime service named John Shepheard (d.1734). I have found baptisms for two children born to John and Dorothy Shepheard.  Son John was baptised in 1716 at St Alphage London Wall and appears to have died in childhood. Daughter Dorothy was baptised on 13 June 1725 and the register of  St Mary Whitechapel  records that her mother was dead – the burial took place on 17 June.  I wonder who cared for half-sisters Mary Dorothea and Dorothy whilst John Shepheard sailed on long voyages to Asia?

The next event for the family which I have traced is the marriage in 1732 of Mary Dorothea to John Edgell, an officer at Custom House.  John Shepheard gave his step-daughter a marriage portion of £1,000. The Edgells had six children baptised at St Mary Whitechapel: Mary, Priscilla, William, Amelia, and two sons called John who died in infancy. But in 1740 Mary Dorothea and John agreed to separate because of ‘some unhappy differences’.

On 11 July 1741 John Edgell was admitted to Bethlem Hospital which cared for mental ill health.  He died there on 7 August 1741. His will provided for his children William, Mary, Priscilla and Amelia, but left only one shilling to his wife together with the income from her marriage jointure.  John died owing considerable debts and Mary Dorothea entered into Chancery proceedings to settle her husband’s estate. 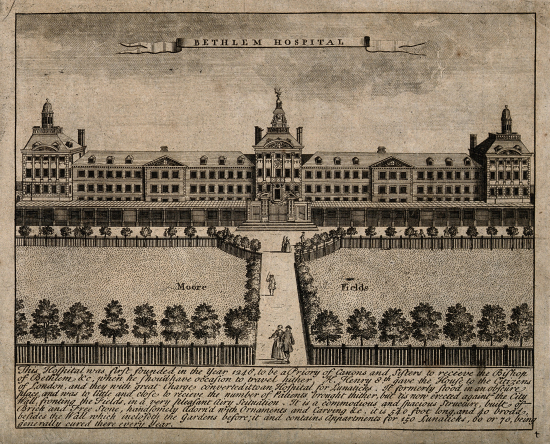 The Hospital of Bethlem [Bedlam] at Moorfields, London Wellcome Images

However provision was made for Mary Dorothea by John Shore, East India Company warehouse-keeper and father to supercargo Thomas Shore. It seems that the Shore and Shepheard families had become friends through their Company connection.  John Shore died in October 1741 and his will gave Mary Dorothea £40 a year and possession of his house in Alie Street, Goodman’s Fields, with all the contents, until his ‘beloved’ son Thomas returned to England.

Thomas Shore returned from China in the late summer of 1743.  He was granted probate of his father’s will on 15 August and married Mary Dorothea on 29 August.

In 1745 Mary Dorothea and her half-sister Dorothy Shepheard were living together in Wanstead, Essex, whilst Thomas set off on another voyage to China.  They gave evidence at the Chelmsford trial of Jonathan Byerly who was convicted of breaking into the Shore house at night and stealing a quantity of silver items.  Byerly was sentenced to be hanged.

Mary Dorothea must have died within the next five years, because on 6 September 1750 Thomas Shore married Dorothy Shepheard. Was Mary Dorothea excluded from the Shore family story to avoid drawing attention to the blood relationship between Thomas’s first and second wives?