The personal possessions of Thomas and Dorothy Shore

The first document is an inventory of the household goods, plate, jewels, china, linen, furniture, clothing, and books belonging to Thomas Shore which were in his London house at the time of his death in 1759. 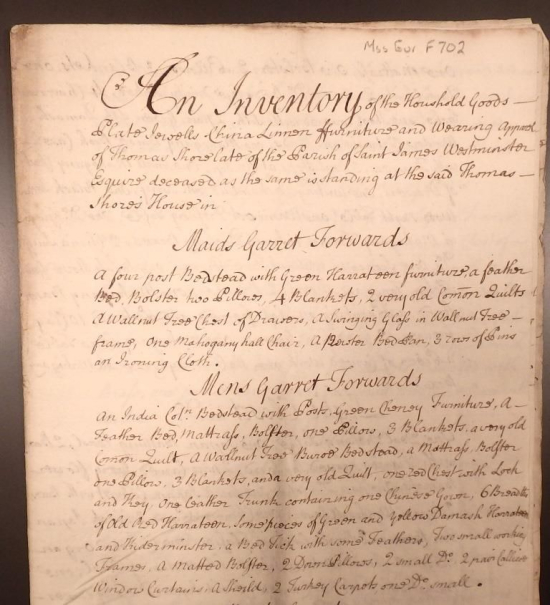 The second is an auction catalogue for furniture, fine china, and ‘other East Indian Curiosities’ which were sold in June 1775 when Dorothy Shore, ‘A Widow Lady,’ moved from Golden Square in London to the country. 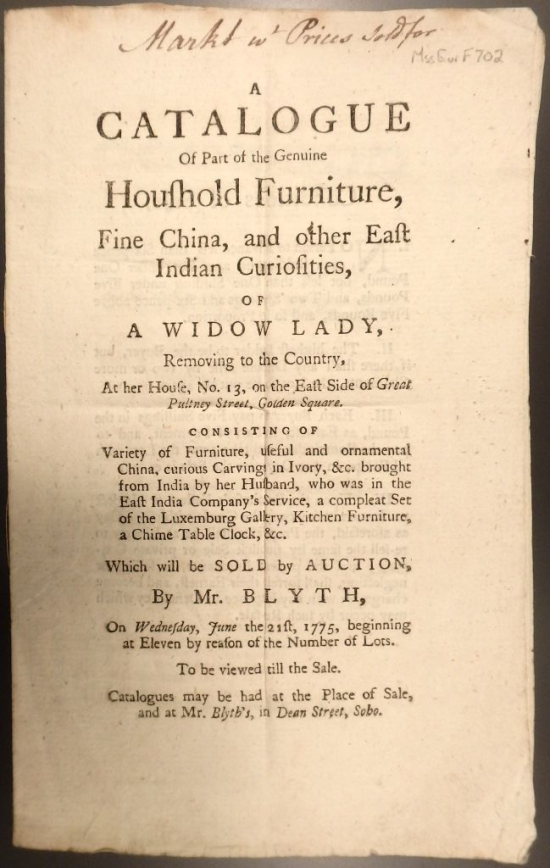 Thomas Shore (1712-1759) was the son of John Shore, the East India Company’s warehouse-keeper at Botolph Wharf on the River Thames.  Thomas followed his father into Company service, becoming  a supercargo in charge of the commercial business of several voyages to China.

The inventory lists the contents of Thomas Shore’s house room by room: servants’ garrets;  bedrooms; closets;  dining room; parlours; china room; kitchen; yard; wash house; pantry; and cellar. Every item is recorded from valuables to a cheese toaster and mops. Thomas owned many objects from Asia including Chinese snuff boxes, musical instruments, and ornaments; Indian textiles and tea kettles; dressing boxes and a bathing bowl from Japan.  Thomas’s book collection ranged from works of religion and history to geometric problems and Gulliver’s Travels.  Dorothy’s personal belongings in the house were itemised to distinguish them from her husband’s property, mostly jewellery but also her clothes, childbed linen, and textile pieces. The auction of Dorothy Shore’s household goods offered a ‘Variety of Furniture, useful and ornamental  China, curious carvings in Ivory, &c brought from India by her Husband’.  Amongst the items sold were an ‘India japan case with Mariner’s charts’ - 2s 6d; 27 small Indian pictures of birds and flowers - 6s; a parcel of India paper hangings on cloth - £1 6s 0d; ten blue dragon plates, two basins, a Nankeen sugar dish with handles, cover and plate – 7s; two Chinese summer houses with figures – 7s.  Some lots can be matched to objects listed in her late husband’s inventory, for example the ‘Luxemburg gallery’ of prints. The sale raised a total of £103 5s 0d. We should like to thank the Friends of the British Library for their generous donation enabling the purchase of such interesting documents which allow us to peek into the homes of an East India Company family in the 18th century.