Captain Ross muses on the ice

Captain, later Sir, John Ross was one of the first Royal Navy officers sent by Sir John Barrow in search of the Northwest Passage. Barrow, presiding over huge Naval resources after the end of the Napoleonic Wars, was determined the Navy would finally discover the fabled Northwest Passage and, in turn, underscore Britain’s oceanic prestige to the world. Fitting out ships with crews of distinguished war veterans Barrow began one of the most significant non-military campaigns in the Royal Navy’s history and Ross represented one of the most trusted officers at his disposal.

Leaving London’s docks on 18 April 1818 Ross set out to chart the Arctic coast of North America but the captain took with him significant personal interests in the icescapes, peoples, flora and fauna he would encounter on the journey. Indeed, Ross’s account of the voyage, published in 1819, is notable for the various scientific and anthropological studies he relates, as well as his musings on the shape and form of ice. Some of Ross’s depictions of the ice are reproduced as accompanying illustrations to the text, including the two ‘Remarkable Iceberg(s)’ illustrating this post. ‘A Remarkable Iceberg, June 17th, 1818’ from Ross, J. (1819), A Voyage of Discovery, made under the orders of the Admiralty, in his Majesty’s ships ‘Isabella’ and ‘Alexander’ for the purpose of exploring Baffin’s Bay, and enquiring into the possibility of a North-West Passage. G.7399

Ross’s icescapes are grand and sublime, overawing the crew with their stature and beauty in the light of the Arctic summer. The text and other illustrations for the publication also show how this sublime beauty can easily become a source of terror, as the ships and their crews become imperilled by the power and capriciousness of the Arctic ice. This ability of ice to shift dramatically from sublime beauty to source of terror is played with to great effect in Mary Shelley’s gothic masterpiece, Frankenstein: or, The Modern Prometheus. Published the year after the return of Ross the novel highlights how modern men can be overpowered by natural forces still beyond their control. 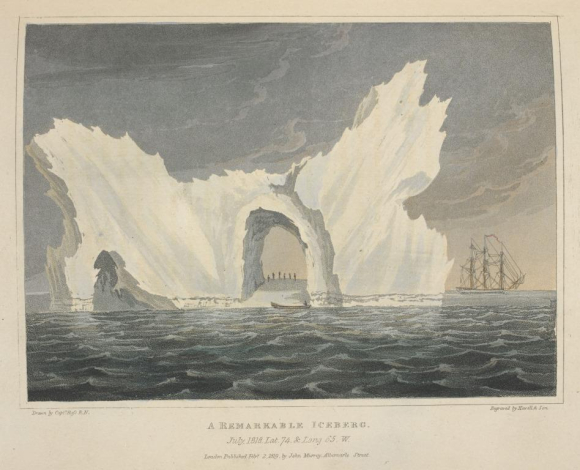 ‘A Remarkable Iceberg, July, 1818’ from  Ross, J. (1819), A Voyage of Discovery, made under the orders of the Admiralty, in his Majesty’s ships ‘Isabella’ and ‘Alexander’ for the purpose of exploring Baffin’s Bay, and enquiring into the possibility of a North-West Passage. G.7399

Despite making good progress in the summer months Ross turned around and headed home after entering Lancaster Sound. Ross claimed he saw mountains blocking further passage into the Sound but other members of his crew did not have the chance to verify Ross’s sighting. It is possible that Ross saw a mirage and took this as good reason to turn back for England, but could it also be that his musings on the ice had spooked him? It is possible, Ross’s illustrations show his awareness of the fragility of human bodies and ships to the overwhelming power of the ice, but then it is also possible Ross genuinely believed the Northwest Passage would not be found that way – or indeed any way.

Whatever the reason for his return from the Arctic, Ross’s decision earned him the ire of Sir John Barrow who was furious his captain had returned after posing so little challenge to the Passage. He would attack Ross, directly and anonymously, through the rest of his career and was delighted when Ross’s second in command, W. E. Parry, contradicted the reports of his captain. Barrow’s search for the Northwest Passage was not yet finished.

Posted by Margaret.Makepeace at 08:30:00 in Journeys , Science and environment , Visual arts