English settlements on Madagascar – a tale of disaster

East India Company ships regularly called at Madagascar for water and firewood, and bartered with the local people for supplies of beef and fresh provisions. But in the 1630s and 1640s there were English ambitions to establish a plantation on Madagascar.  The East India Company declined to become involved, saying all resources were fully committed to normal trading operations. 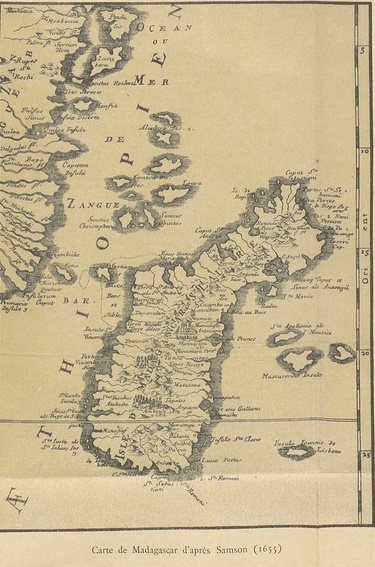 In 1644 the Courteen Association sent 140 men, women and children as planters to Madagascar.  A settlement was established on the south side of St Augustine’s Bay.  But crops failed, there was not enough grass to pasture cattle, the settlers lacked proper supplies, and fever and dysentery struck. Faced with starvation, the survivors sailed for the Comoros in May 1646.

In the spring of 1649 an all-male group of planters set out. They planned to settle on one of the islands off the north-west coast of Madagascar. The East India Company was persuaded to reach an agreement with the merchants backing the venture, and in February 1650 sent two ships to drop more men and supplies at the plantation.  Presents were taken for the King of Assada – a small chariot which had belonged to Queen Anne, a sword, and a looking glass. But again death from disease and the hostility of the local people caused the planters to give up.  They sailed for Surat on 20 August 1650.  Most entered East India Company service as seamen, and the rest were sent home. 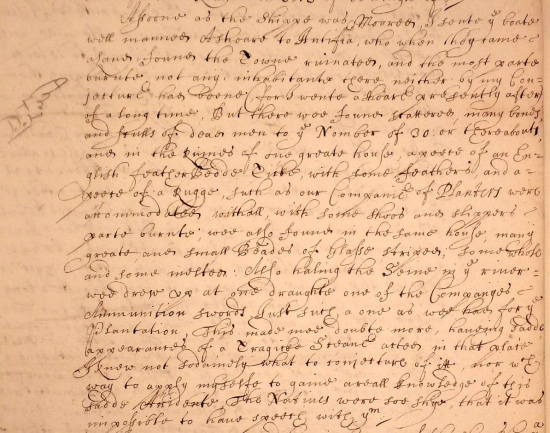 This is what East India Company captain James Bearblock discovered when he arrived in the Supply at Madagascar in early October 1650:
‘As soon as the ship was moored, I sent the boat well manned ashore to Antifia, who when they came aland, found the town ruinated, and the most part burnt & not any inhabitant there, neither by my conjecture had been (for I went ashore presently after) of a long time.  But there we found scattered many bones and skulls of dead men to the number of 30 or thereabouts, and in the ruins of one great house, a piece of an English feather bed tick, with some feathers, and a piece of a rug, such as our company of planters were accommodated withall, with some shoes and slippers part burnt.  We also found in the same house, many great and small beads of glass striped, some whole and some melted.  Also hauling the seine in the river wee drew up at one draught one of the Company’s ammunition swords, just such a one as we had for the plantation.  This made me doubt more, having sad appearances of a tragic scene acted in that place.  I knew not suddenly what to conjecture of it, nor which way to apply myself to gain a real knowledge of this sad accident.  The natives were so shy, that it was impossible to have speech with them’.

Bearblock made repeated efforts to find the settlers before sailing to the Comoros where he learned what had happened.  Because of the inevitable time delay in news reaching London, the Company continued to send ships and planters to Assada, and the ships continued to search for the settlement before giving up and proceeding to India. The experiment was not attempted again.

Posted by Margaret.Makepeace at 08:30:00 in Africa , Commerce , Health , Journeys