In the 18th century it was not unusual for East India Company servants to have Indian wives or mistresses. Children of these unions were often openly acknowledged.  Attitudes began to change after 1800 and there was a growing tendency to try to keep such families secret. Company official Gerald Wellesley provided for his children born to an Indian woman in the 1820s but stopped short of giving them his name or recognising them publicly as his offspring.

Gerald Wellesley (1790-1833) was the son of Richard, Marquess Wellesley, Governor-General of India 1798-1805. Educated at Eton and at East India College in Hertfordshire, Gerald was appointed to the Bengal Civil Service in 1807. He spent many years as Resident in the Princely State of Indore. 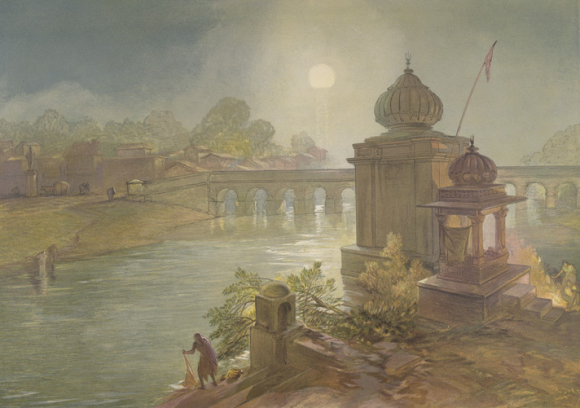 Gerald had three children with a woman whose name has been recorded as ‘Culoo’: Agnes Maria (born 6 May 1825), Charles Alfred (born 19 January 1827), and Frances Jane (born 23 December 1827).  After a successful career in India, Gerald decided to return to England. In 1830 his children travelled to England under the surname Fitzgerald on the ship Charles Kerr in the care of Maria Elizabeth Lermit and her sister Jane Baker.  Maria was the widow of Captain Alfred Lermit of the Bengal Native Infantry.

The ship arrived at Deal on 29 June 1830.  On 10 July 1830 at St George Hanover Square London Maria Lermit married James Vaughan, newly retired from the Madras Civil Service and a fellow passenger on board the Charles Kerr.  The three Fitzgerald children were baptised at Trinity Church Marylebone on 9 August 1830 with their parents named as Charles and Culoo Fitzgerald of 29 Carburton Street.

Gerald travelled back from India overland via the Middle East and Europe. His journey was fraught with difficulty after he collapsed in Belgrade. He eventually arrived in London in December 1832. 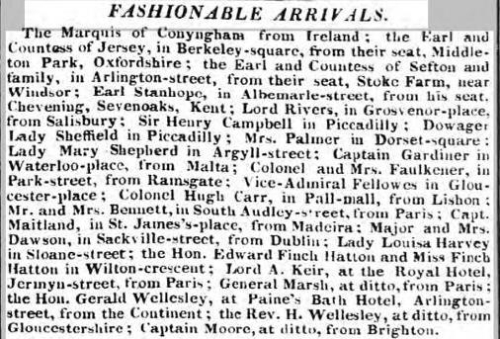 Just seven months later, on 22 July 1833, Gerald Wellesley died at the home of his brother Henry in Flitton Bedfordshire. In his will Gerald bequeathed life annuities of £150 for his three ‘protegés or adopted Children’, Agnes, Charles and Frances Fitzgerald.  He named as their guardian Maria Vaughan or, in the case of her death, Jane Baker, ‘being confident they will discharge the trust in the way I could wish’.  An annuity of £100 was provided for the guardian.  The reminder of his estate was shared between the children of his late brother Richard; his brother Henry; and his sisters Anne and Hyacinthe.

Frances Fitzgerald died in Marylebone in May 1834 aged 6 years. I have been unable to discover what happened to her brother Charles, but her sister Agnes grew to adulthood living with her guardian’s family.  James Vaughan died in 1833 and Maria was remarried in 1838 to Colonel Andrew Creagh.  In the 1841 census, Agnes was with the Creaghs in Hastings, and in 1851 she and the now thrice-widowed Maria were lodging together in Cheltenham.  In 1856 Agnes married Edward Bullock Finlay, a Church of England priest.  Agnes died on 27 October 1908 aged 83.  I wonder how much she knew of her Wellesley and Indian heritage?