In April 1886 large crowds flocked to the Royal Aquarium in Westminster for the Grand Easter Fete.  The promoters claimed that the programme was the greatest ever attempted in one day. 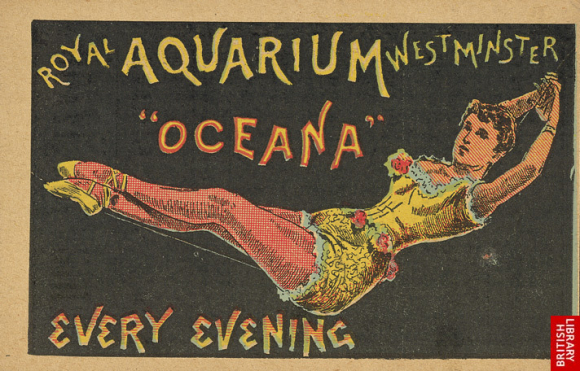 The acts certainly were numerous and varied. Music was provided by Walton’s American Minstrels, Miss Jessie Lynn singing with a harp accompaniment, Madame Pacra ‘the charming little French Chansonette Singer’, and the Clayton Quartet ‘Musical Eccentriques’.  A ballet entitled Coralie was performed.  Miss Bessie Bonehill ‘The Gem of Comedy’ was joined on the bill by Baby Langtry ‘the most Clever Child in the world’. Madame Carola performed on nineteen drums before walking across the building on a globe along a single wire 100 feet high.  And as if that wasn’t enough, the audience were also treated to the Scroggs Troupe of Grotesque Athletes, the Wondrous Valdis Sisters on the revolving trapeze, and Professor Buer’s animal circus.

Professor John Buer was the stage name of animal trainer John Butler.  A newspaper report of his Easter act at the Royal Aquarium read: ‘Professor Buer then introduced his canine wonders to the audience.  His dogs are highly trained, one taking off his collar and putting it on, and others performing the tricks usually done by canine performers.  An equestrian act by a monkey mounted on a pony followed, and the “unrideable Spanish mule” was last brought on, the tumbles sustained by a youth who attempted to ride the animal exciting much amusement’  (The Era 24 April 1886).

In 1896 allegations were published in the press of cruelty to animals by trainers such as Buer.  The Professor protested that the claims were untrue.  There were no spiked collars, underground cellars, and cramped boxes.  He and his fellow trainers worked hard to ensure their animals were well-fed, clean and healthy.  In 1913 Buer and other owners such as James Sanger worked with the Royal Society for the Prevention of Cruelty to Animals to introduce a licensing system for anyone working with animals on stage.

Buer’s most famous animal was Domino the donkey. Domino was with Buer for more than 40 years, performing all over the world, including shows with Sarah Bernhardt.  He once received a first night bouquet – of carrots!  When Domino died in November 1916, there were obituaries in newspapers from the UK to Australia. 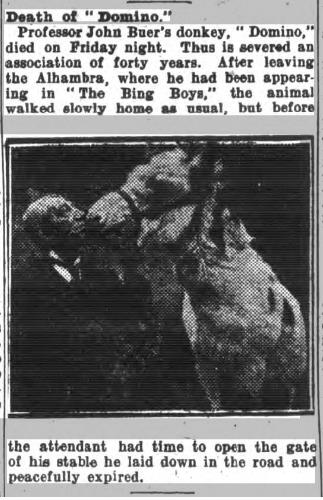 John Buer carried on performing throughout his seventies, claiming to be the oldest living clown. He lived in housing belonging to the Duchy of Cornwall in Kennington. The Prince of Wales used to visit his tenants there and met Buer on more than one occasion.  In April 1919 the Prince brought his mother Queen Mary with him.  Buer showed the Queen pictures of the animals he had trained and proudly listed the accomplishments of Domino the donkey. He explained how he had taught Domino to count and answer questions.  Queen Mary promised not to divulge his professional secrets. The Professor died in November 1920 aged 80. His last part had been as a beggar in The Garden of Allah at Drury Lane a few weeks earlier.