In the early hours of 12 November 1914 George Richardson, the British Vice-Consul to the Red Sea port of Hodeidah (Al Hudaydah) in Yemen, was awoken by the sound of the town’s Turkish gendarmes forcing their way into his residence.  Fearing assassination, Richardson leapt from his terrace to that of the neighbouring Italian Vice-Consulate, whereupon he awoke his Italian counterpart Gino Cecchi, and pleaded for asylum.  Minutes later, having realised that Richardson had escaped next door, the Turkish gendarmes stormed the Italian Consulate, injuring an Italian guard in the process, and arrested Richardson. 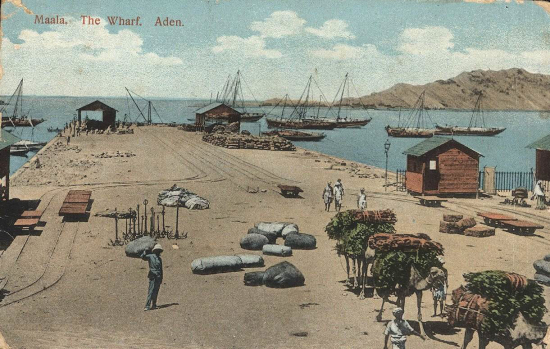 It took a month for news of the raid and of Richardson’s arrest to reach the newspapers in Britain.  With Italy not yet having entered the war, and the British and French Governments lobbying for Italy to enter on the side the Allies, the British press focused on the ‘outrage’ that the Turkish authorities had inflicted against Italy in raiding one of its consulates, in what became known as the Hodeidah Incident.  On 14 December The Daily Telegraph reported a ‘new and very grave Italo-Turkish incident’, describing the incident as a ‘Turkish outrage at the Italian Consulate’.

Copy of a communication sent by the British Ambassador to Italy, Sir Rennell Rodd, to the Secretary of State for Foreign Affairs, Sir Edward Grey, 12 December 1914. IOR/L/PS/10/465, f 124.

In press reports, no mention was made of why orders were given by the Turkish to raid the Italian Consulate and arrest and detain the British Consul.  Political and Secret Papers in the India Office Records, now available on the Qatar Digital Library reveal more details.

Reporting on the incident after his eventual release, Richardson wrote that on 4 November a ‘ship of war’ appeared in Hodeidah harbour, flying the Turkish flag.  The warship then swapped its Turkish flag for the White Ensign (the British Naval flag), and dispatched a steam cutter and crew, which proceeded to set fire to a Turkish cargo vessel.  Richardson only later learnt that the vessel in question was HMS Minto, a small ship whose appearance and actions caused great consternation amongst the inhabitants of Hodeidah:

The Minto’s action led to Richardson’s freedoms being increasingly curtailed by Turkish officials and, fearing ‘an intended massacre of British subjects in the city’, he barricaded himself and his family in the consulate.  The British attack on the Turkish fort at Cheikh Said, 150 miles south of Hodeidah, on 10 November 1914, led to an exodus of the population from Hodeidah, who expected British vessels to visit the port the following morning.  It was amidst this climate of fear and retribution that Turkish officers stormed the British and Italian consulates on the night of 11/12 November.

Richardson had no intimation of the events that unfurled in Hodeidah in early November 1914, writing only that he had received a cypher cable from Constantinople on 3 November, informing him that Britain would declare war on Turkey and that he should make arrangements for his immediate departure.

Unbeknownst to him, the Admiralty had ordered HMS Minto to ‘proceed up the Red Sea and destroy Turkish steamers and dhows’ on 2 November, three days before Britain’s formal declaration of war against Turkey.  As one India Office official noted at the time, in the early days of the war, the Admiralty was ‘disposed to be indiscriminate in their action’ in the Red Sea.

Posted by Margaret.Makepeace at 08:30:00 in Conflict , Middle East , Qatar , World War One