A Carnival on the Water: the Frost Fair of 1683

The frost fair held on the iced-over River Thames in 1814 that recently featured in Doctor Who may have been the last, but it was the fair held during the Great Frost of 1683 that got the ball rolling with this famous tradition.

In the winter of 1683, the River Thames was iced over for two months.  Winters in the 17th century were more extreme than they are today – the frost of 1683 was the worst ever recorded and the ice reached a thickness of eleven inches in London.  The frozen river made shipping impossible and so Londoners would take to the ice-covered river for trade, travel and, eventually, entertainment.  The first recorded frost fair on the Thames took place in 1608, but this was pretty low key.  The festivities really took off in 1683 with the frost fair featuring all manner of stalls, entertainments and activities.

The two-month fair was indeed a spectacle and people flocked to see it.  Broadsides and flyers were hastily printed, advertising the fair as “Great Britain’s wonder” or “London’s admiration”.  They claimed that “men and beasts, coaches and carts, went as frequently [on the river] as boats were wont to pass before”. 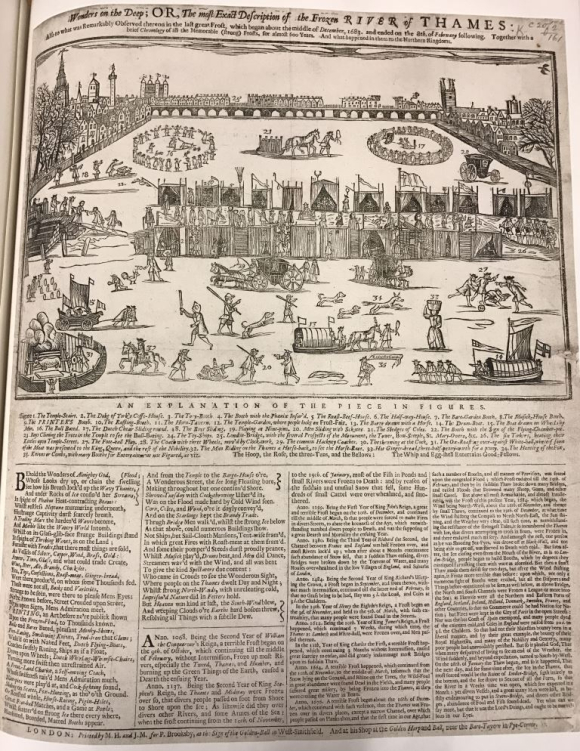 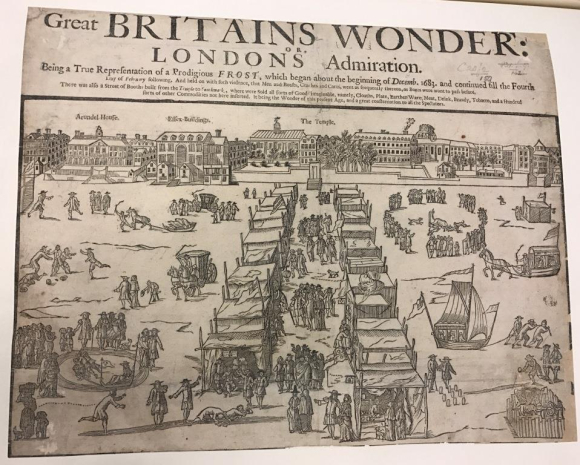 One broadside, titled Wonders on the Deep, captures the festivities in a fantastically detailed, labelled woodcut of the frost fair itself: 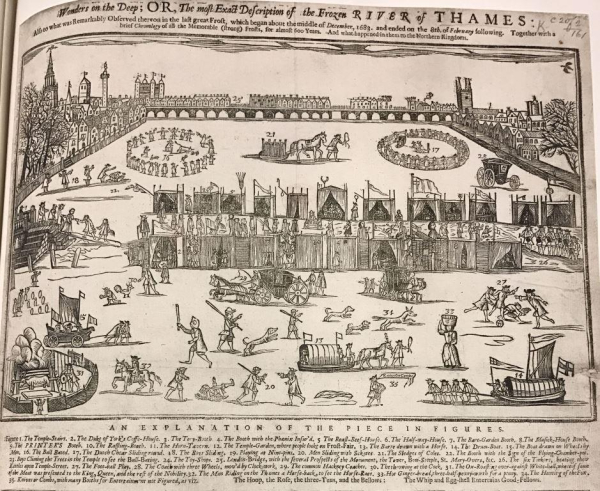 The fair is framed by the unmistakable outlines of London Bridge and the Tower of London.  On the ice itself an avenue of booths and stalls sprang up, stretching from the Temple to Southwark.  Scattered on strong ice everywhere did these “blanketed, boarded, matted booths appear”, where you could buy all sorts of wares from silver cups to gingerbread and roast beef.  Alternatively, you could stop at a coffee-house booth (number 1 on the illustration) or drop into a tavern.  A print shop, too, was established on the iced-over river so that printing was seen by members of the public often for the first time (number 9).   As if this wasn’t enough, an agog visitor would have seen sailing boats being dragged along the ice on wheels, bull and bear baiting (number 16), ice skating and fox hunting (number 34) all on the River Thames.

And for the more hardcore frost fair-goers out there, it also got a little more unusual.  Amidst more familiar entertainments, there appears to have been a booth with an injured phoenix inside (number 4) and other novelties with their meaning lost to us today, such as a “tory booth”  (number 3) or the “Dutch chear sliding round” (number 17).

In February, after two months, the ice finally melted and the revelries came to an end.  The frost fair of 1683 established a precedent for future fairs, but no other frost was as lasting.  The last fair in 1814 only lasted for four days yet Londoners still managed to lead an elephant across the frozen Thames below Blackfriars Bridge in that time span.  It’s clear that, whether held in the 17th or 19th century, the frost fair was the pinnacle of seasonal cheer, spectacle and revelry – a “carnival on the water”, as described by John Evelyn in his diaries during the fair of 1683.

Posted by Margaret.Makepeace at 08:30:00 in Domestic life , Leisure , Rare books