On 20 May 1832 John Constable was at home in Hampstead drafting an introduction to English Landscape, a set of mezzotints after his own views.  Constable was writing at a time when ‘topographical’ art had become seen as a lesser form of landscape. The draft shows Constable struggling with how to express his aim of lauding “the Genuine Scenes of England” as “the vehicle of General Landscape”, “part of the legitimate art of the country”. 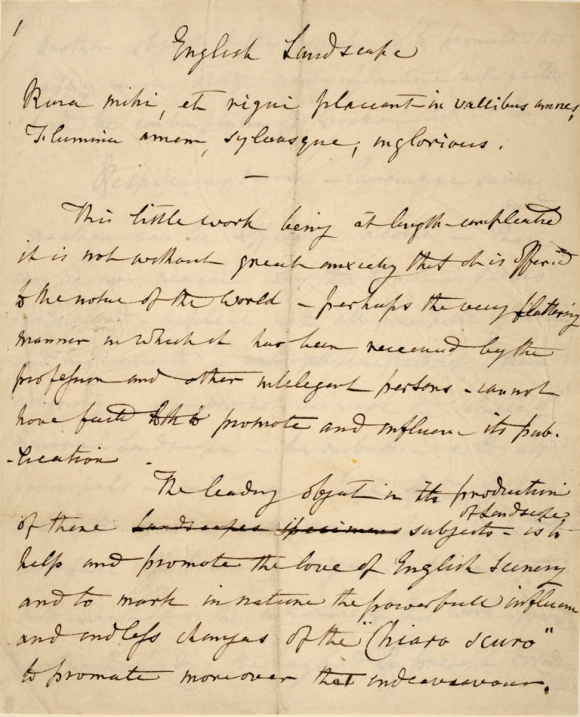 This little work being at length compleated it is not without great anxiety that it is offered to the notice of the world - perhaps the very flattering manner in which it has been received by the profession and other intelligent persons cannot have failed both to promote and influence its publication.

The leading object in the production of these Landscape specimins subjects of Landscape - is to help and promote the love of English Scenery and to mark in nature the powerfull influence and endless changes of the “Chiaro scuro” to promote moreover that endeavour.

Another object of this work is to promote that happy union of the study of nature in the fields with the contemplation of works of art at home.

Neither can be effective alone – there can be no reason why the Genuine Scenes of England – repleat with all powerful associations and endearments –  with per this perhaps – their amenity – should not be made the Vehicle of General Landscape – be embodied with its principals – and become part of the legitimate art of the country – the art so pursued could not fail of becoming original & characteristic and what it is the endeavour of this work to promote notwithstanding the hazard of its present disadvantage.

In an age and country so abounding with great examplars – both of living and departed excellence genius. it will follow the imitator or at best and their consequent attendant conoursurship – it must follow that imitative merit or at best that excellence which is eclectic will be the least disputed – and more redily received than that with which the world is as yet unacquainted – but those species of merit would be neither congenial with the spirit, nor at all according the principals which it is the endeavour of this work to display.

Three other drafts of this introduction are held by the Fitzwilliam Museum, Cambridge. They were donated in 1953 by Constable scholar R.B.Beckett.
“The most interesting [of the papers I am offering], to my mind, are the draft introductions to English Landscape. In his first draft Constable was going beyond his immediate purpose of explaining the mezzotints and was seeking to put into words the battle, so to speak, which he had been fighting all his life – that of setting landscape, and particularly English Landscape, on its own feet. There is something pathetic in his painful & cumbrous efforts to express himself: an exact parallel with the difficulties he found in his early attempts at drawing, which did not come naturally to him: or you may draw another parallel between his rapid sketches and short satirical remarks on the one hand, his attempts at ‘finishing’ and elaborating in paint or in words, on the other.”

Further reading:
Various Subjects of Landscape, Characteristic of English Scenery, from Pictures Painted by John Constable, R.A., Engraved by David Lucas, a set of mezzotints known as English Landscape.  The British Library holds Constable’s draft in an extra-illustrated copy of Walter Thornbury’s Life of Turner, Tab. 438.a.1. English Landscape was issued in parts from June 1830 to July 1832, with an introduction dated 28 May 1832 included in the July instalment.

Posted by Margaret.Makepeace at 09:00:00 in Visual arts