Exploits of the Queen’s Own Light Dragoons

The India Office Records contain a wealth of information about the pre-independence Indian Army and the forces of the East India Company, but one small file from the parallel collection of private papers includes details of a British Army unit which took part in one of the most notorious disasters in this country’s military history. 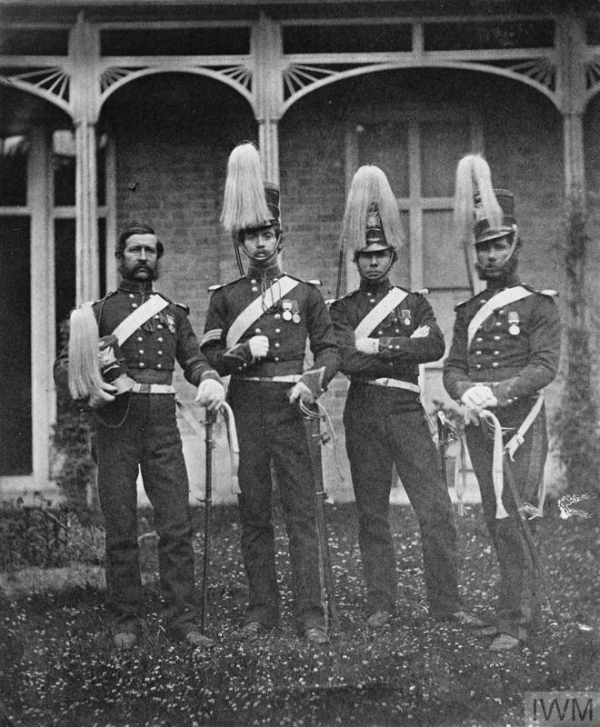 Alongside a small number of ephemeral items is the Nominal Roll of the 4th Queen’s Own Light Dragoons, printed at the Regimental Press in Rawalpindi. Its nine pages list more than 300 officers, N.C.O.s and men ‘who embarked at Plymouth, for service in the EAST, on the 17th day of July 1854’. They sailed in the Simla under the command of Lt Col Lord George Paget, and included a paymaster, a surgeon, an assistant surgeon and a veterinary surgeon, four trumpeters and four farriers. Three columns give their regimental number, rank & name, and ‘Remarks’. When I noticed entries such as ‘Killed in Action, 25th October, 1854’, ‘Died at Scutari, 10th February, 1855’, and ‘Prisoner of War, 25th Oct., 1854, and died in Russia’, I realised that the 'East' in question is not India but the Crimea. 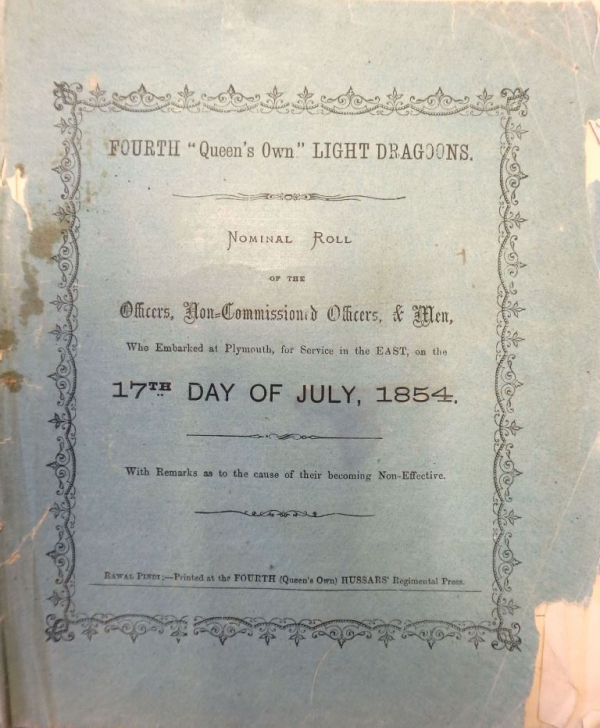 The individuals listed almost certainly took part in the Charge of the Light Brigade. The tenth page gives a breakdown of casualties through to 30 April 1856, and shows that 21 of the Dragoons were killed (including two who died of wounds); 103 died of disease; eleven became prisoners of war; seven 'died in the hands of the Enemy'; and four 'suffered amputation'. It is noted laconically that Lieutenant H.S. Adlington 'Had two horses shot under him at Inkerman. Retired 4th March 1856'; that Sergeant W. Watson 'Died at Manchester, 10th October, 1859'; and that Privates J. Darby and J. Hammond were discharged respectively 'for general debility' (25 December 1856) and 'for insanity' (28 August, 1856), in contrast to Private J. Gilchrist, who was 'Discharged with ignominy, 15th February, 1860'. Three men – Privates J.E. Dray, G. Palmer and J. Wood – are identified as deserters.

It is a pity that the Roll does not mention the outstanding act of bravery performed by Private Samuel Parkes during the battle of Balaklava. Not only did he save the life of the dismounted trumpeter Crawford after his own horse had been killed by protecting him from two Cossacks, but later in the retreat he fought off six more enemy soldiers armed only with his sword. He was fittingly awarded the Victoria Cross (London Gazette, 24 February 1857) and decorated by the Queen herself on 26 June. The Roll states that Crawford lived to fight another day and was discharged on 5 February 1861, whereas Parkes had been discharged three years earlier on 1 December 1857; he died on 14 November 1864.

Fourth ‘Queen’s Own’ Hussars in India