Today we are telling the story of Ian Alistair Kendall Burnett, a British Museum librarian who was killed in action near the French city of Arras on 31 May 1917. 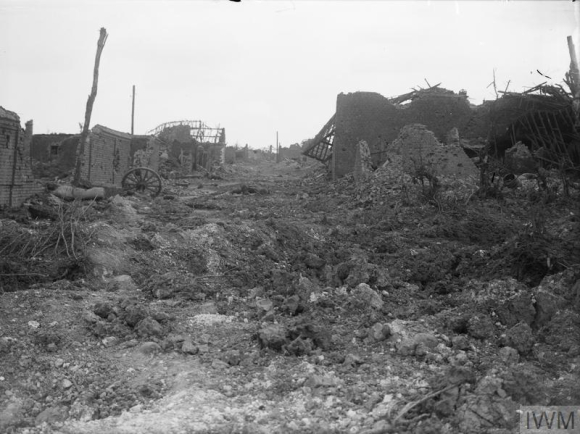 Ian Alistair Kendall Burnett was born at Aberdeen on 20 June 1885, the only son of William Kendall Burnett and his wife Margretta. William was the son of the 6th Laird of Kemnay and a prominent figure in Aberdeen civic life, serving as both magistrate and city treasurer before his death in 1912. Ian Burnett was educated at Aberdeen Grammar School, where he evidently did very well. His university obituary stated that he had a brilliant career at school, ‘being first in every class, usually in every subject; he was editor of the school magazine and president of the debating society, and he became Dux of the school in 1903’. Burnett then entered the University of Aberdeen, graduating in 1908 as M.A. with First Class Honours in Foreign Languages. While at university, Burnett was involved in many extra-curricular activities, including significant roles in the university's literary and debating societies. In his final year, he was the editor of the university's student magazine Alma Mater.

In 1909, Burnett was appointed Assistant Librarian at the Royal Scottish Museum in Edinburgh. The following year, he joined the staff of the British Museum, becoming Second Class Assistant in the Department of Printed Books. While at the museum, Burnett succeeded Harold Mattingly in compiling the List of Catalogues of English Book Sales, 1676–1900, now in the British Museum. Published by the trustees of the museum in 1915, the List remains a standard reference text for book provenance research.

It is possible to trace the broad framework of Burnett's military career from his service records and from unit histories. While still working at the museum, Burnett joined the cavalry squadron of the Inns of Court Officers' Training Corps in 1913. He gained a commission after the outbreak of war in 1914, and from then on served with the 3rd (Reserve) Battalion of the East Lancashire Regiment. He was then attached to three different battalions on active service. We know that Burnett saw action in many of the key battles on the western front: 2nd Ypres in 1915, the Battle of the Somme in 1916, and the Battle of Arras in 1917. In his time at the front, Burnett suffered from gas poisoning once and was injured twice, returning to the UK each time to recuperate. By early 1917, Burnett had become a company commander in the 8th (Service) Battalion of the East Lancashire Regiment, with the temporary rank of Captain. Burnett died on the 31 May 1917, when his battalion was involved in a futile night attack on Infantry Hill, east of Monchy-le-Preux, near Arras. His body was never recovered. 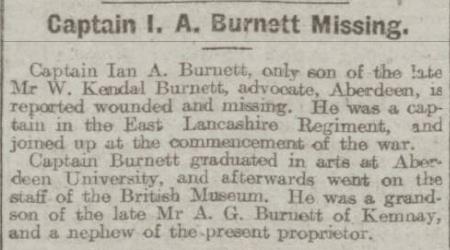 Captain Burnett’s name is recorded on the Arras Memorial to the Missing. He is also commemorated on war memorials and rolls of honour in in Aberdeen, Kemnay, and London, including the British Librarians’ memorial in the British Library at St Pancras. 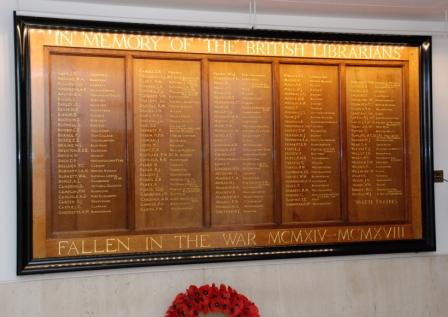