Oak trees provided essential material for warships in the eighteenth and nineteenth centuries – the ‘wooden walls’ that defended the British Isles from invasion. But they inspired an affection that went far beyond an appreciation of their usefulness. Ancient oaks were treasured and preserved into extreme old age. Landowners were reluctant to cut them down, poets addressed verses to them, artists relished the chance to delineate their swelling trunks and shattered branches. Some went further and treated them as objects of worship.

Writers from this period state that their forefathers, the Druids, worshipped the true God in oak groves before churches were built – hence it was reasonable to see old trees as ‘natural temples’.

Oak trees were also credited with being the sites of the first parliaments, and  symbols of resistance to overweening authority. One famous tree, the Swilcar Oak, is given a speaking part in a poem by Francis Mundy about Needwood Forest in Staffordshire (1776). He shakes his tresses, spreads his bare arms to the skies, and begs the axeman to spare the young oaks growing around him. Horace Walpole claimed that an ancient tree was an image of liberty, since in a country ruled by a despot it would be appropriated for timber. 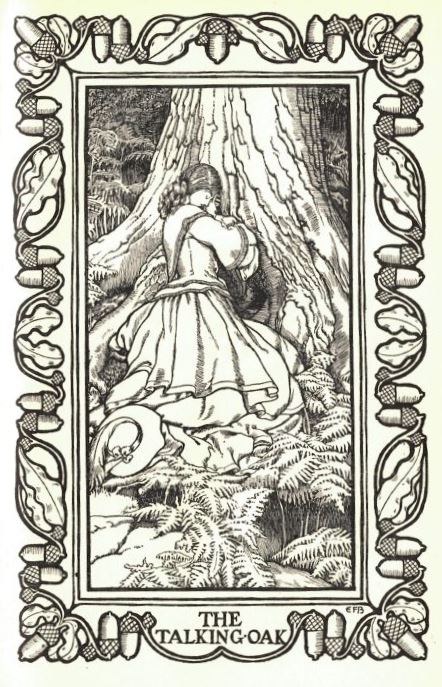 Another vocal tree was the ‘Talking Oak’ of Alfred Tennyson’s poem of that name (1837-8).  Its narrator confides so much in the old oak tree that the tree replies, and tells him that the woman he loves is superior to all the other young women he has seen in his five hundred years of life. What is more, because she also talks (and sings) to the tree, he can testify that his love for her is returned. 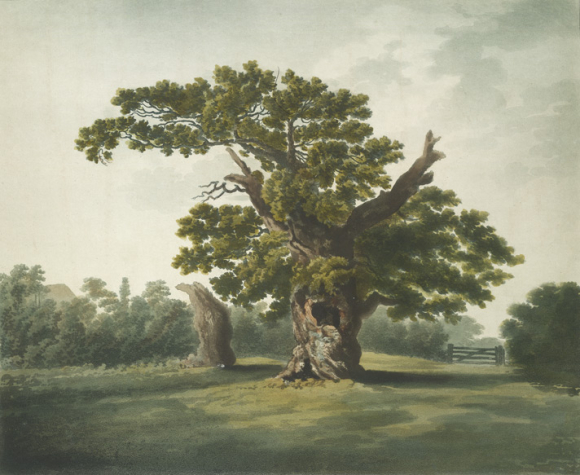 There are many portraits of famous old oak trees.  The Yardley Oak was the subject of a poem by William Cowper (1791-2), who wrote that his idolatry of the tree had some excuse, because of the precedent set by the Druids.

Cowper writes lovingly of the giant bulk of the tree, its sides embossed with excrescences that have developed over many years. Such features also appealed to the artist Samuel Palmer, whose 1828 drawings of the oaks of Lullingstone, near Shoreham in Kent emphasized the human-like belly, shoulders and sinews of the ancient trees. 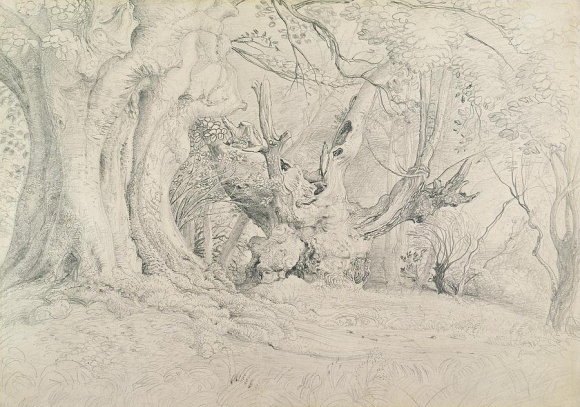 For Jacob George Strutt, who produced 40 portraits of trees for his Sylva Britannica (1822), 21 of them oaks, old trees were ‘silent witnesses of the successive generations of men, to whose destiny they bear so touching a resemblance, alike in their budding, their prime, and their decay’.

Do we still feel the same way about oak trees today?

Posted by Margaret.Makepeace at 08:00:00 in Science and environment , Visual arts