Milking Oil - the start of the Kuwait Oil Industry

The Kuwait Investment Authority, the world’s fifth largest sovereign wealth fund, began life with the gift of two tins of condensed milk to the Sheikh of Kuwait in 1936. 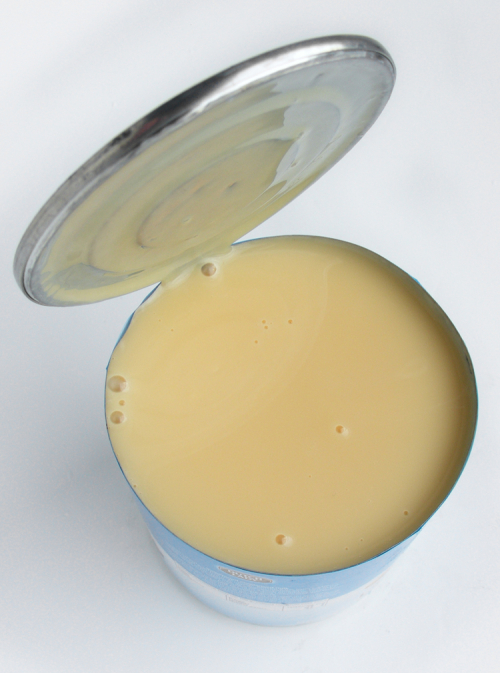 Kuwait’s great prosperity rests on its oil industry, which started with the ceremonial opening of the Kuwait Oil Company’s first well on 30 May 1936. The occasion was captured in a picturesque report probably written by the British Political Agent in Kuwait (Gerald de Gaury). 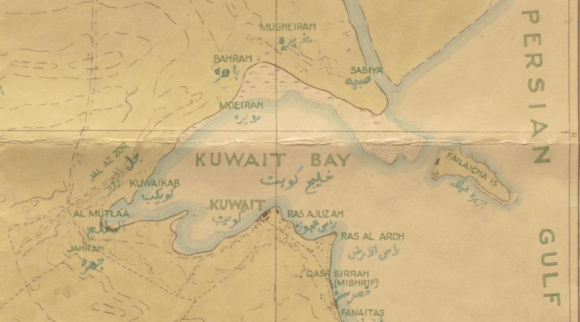 One hundred guests, including the Sheikh, local Notables, and Europeans had been invited by the joint British and US-owned Company to Bahra, the site of the well (known as ‘Bahra 1’).  The opening ceremony fell during the period of warm and strongish winds known as ‘Barih ath-Thuraiyah’, and the day was hot.

At 1.30pm a fleet of cars from Kuwait ‘most of them very fully laden with the Notables and their followers, set out at racing pace into the dust haze’.  ‘Strangely’ says the report, ‘there were no casualties reported’. 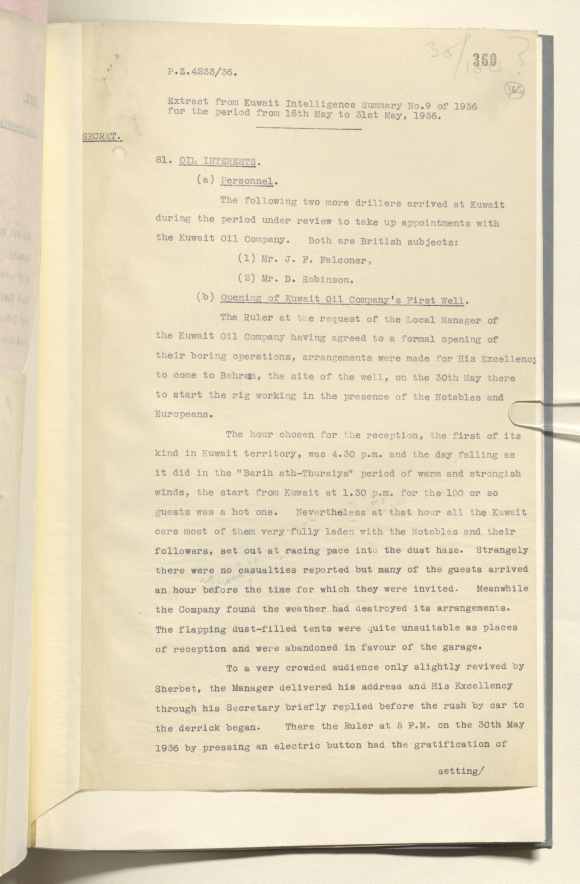 On arrival the Company found that the weather had destroyed its arrangements, as the ‘flapping dust-filled tents were quite unsuitable as places of reception and were abandoned in favour of the garage’.  Speeches were then made by both the Company’s Manager and the Sheikh to ‘a very crowded audience only slightly revived by Sherbet [a cooling juice drink]’.

At 5pm the Sheikh pressed an electric button and ‘had the gratification of setting the rig, the first ever in Kuwait and the third only in all Arabia, to work’.  This was followed by some ‘shy applause’, before the Sheikh examined with attention the machinery both at the rig site and afterwards at the workshops.

The report then gives the following details of the Sheikh’s tour, adding a touch of pathos at the end: ‘Acetylene welding, in particular stirred his interest and he watched, through dark glasses, for some time the cutting of metal by an Indian welder who had already lost one eye through the pursuit of his trade’.

This was followed by the presentation of an unexpected gift: ‘Before leaving the Ruler was shown the Offices and storerooms where the Manager of the Company as a parting gift presented him with 2 tins of Nestle’s milk’.  The Sheikh then expressed very great satisfaction at everything he had seen, and the hope that oil production would not be far behind.  ‘As His Excellency entered his car’, states the report, perhaps somewhat sarcastically, ‘he was informed that the well had already reached a depth of eight feet’.

In the event, Bahra proved not to contain a commercial quantity of oil.  However, a second exploratory well, at Burgan in the southern part of Kuwait, was more encouraging, and a productive area of considerable size had been identified in the area before operations were suspended during the Second World War.

In the 1950s, the Kuwait Government prudently began investing the profits of its burgeoning oil industry in what is now the Kuwait Investment Authority. The fund today has assets in excess of $590 billion.