The Art of Children’s Games

One of the delights of working with archives is when you come across something unexpected while looking for something else completely. This occurred recently when I was looking through a file of newspaper cuttings relating to Persia in the collections of papers of Lord Curzon, former Viceroy of India, held at the British Library. Amongst the papers was a page from The Sphere newspaper, from March 1906, showing a collection of photographs under the title “What To Do With Children: The Art Of Games, as taught by the Children’s Happy Evenings Association”. 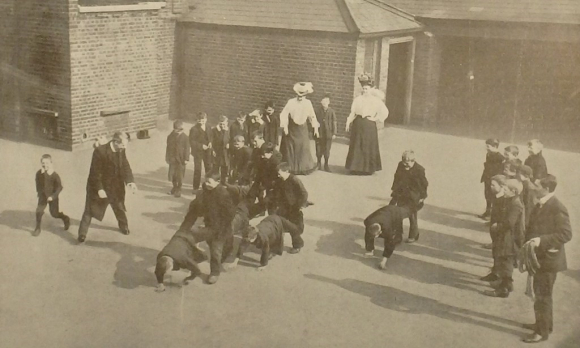 In the late 19th century, the health of working class children was a major concern for social reformers. Children often lived in cramped and unhealthy conditions, with the expansion of cities leaving a lack of safe space where children could play in the evenings. The construction of railways and factories tended to take priority over parks and recreation grounds.

Founded in 1889 by Ada Heather-Bigg, the goal of the Children’s Happy Evenings Association was to provide a wide range of games and activities which working class children could do after school hours. Heather-Bigg believed that play created happiness which was an important element in the development of a child’s health. Giving children something to do in the evenings would also prevent them from getting into trouble and falling into bad ways. Participation in the Happy Evenings was dependent on a child having a good school attendance. This had the advantage of stressing the importance of school and education, but inevitably meant many of the poorest children were excluded. 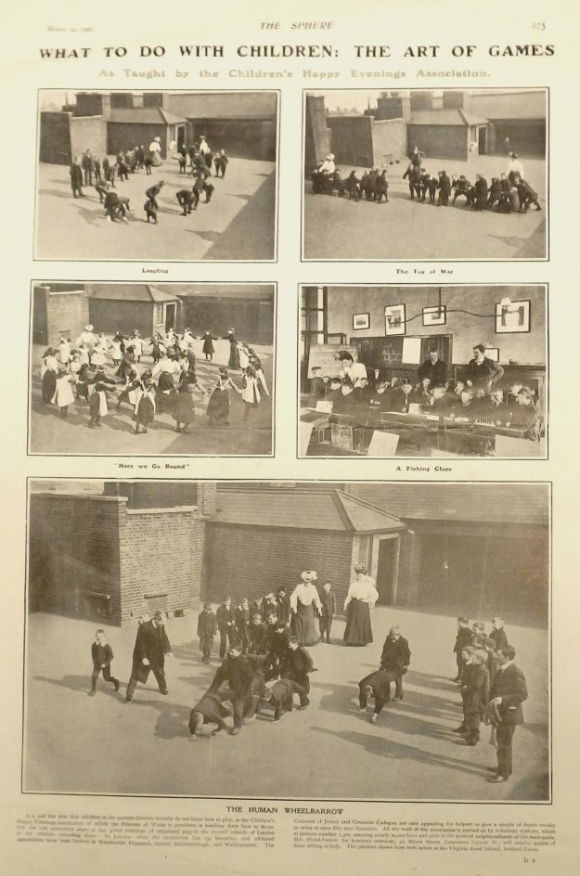 By 1906, the Association had 134 branches across London, and affiliated organisations had been set up in Manchester, Plymouth, Oxford, Middlesbrough and Walthamstow.  It relied on the help of volunteers, with around 1300 volunteers helping to teach 22,000 children from the poorest areas of London how to play. Toys, such as dolls and board games were donated by wealthier families, and there were more energetic games such as running, skipping, and boxing. Music and dancing was also offered, which was a real attraction at a time when a piano was not standard school equipment. The Association came to an end with the start of the First World War.