The loss of the East Indiaman ‘Ganges’

The British Library holds an account of the sinking of an East India Company ship, the Ganges, in 1807.  It is a terrifying story, not least because the crisis took place over several days. The Titanic sank in less than three hours. The Ganges was in trouble for a week. 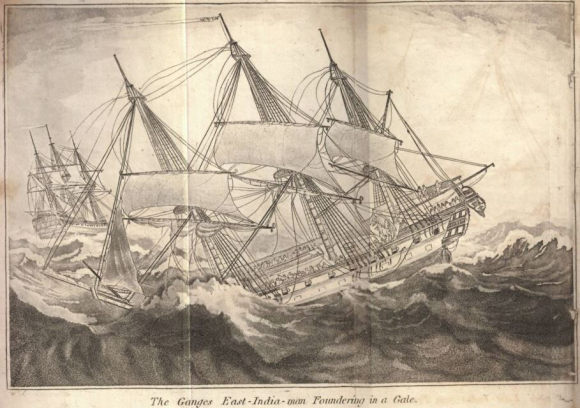 'The Ganges East-India-man Foundering in a Gale' - from T Harington, Remarkable Account of the loss of the ship Ganges East Indiaman… (London, 1808)

The author of the account was Samuel Rolleston, a passenger on the Ganges.  Born in Hampshire in 1775, the son of a merchant, Rolleston had been appointed to the East India Company’s civil service in Bombay in 1794.

A convoy of East Indiamen had left India and was approaching the Cape of Good Hope.  The weather was unsettled and the Ganges had been letting in water. The crew were monitoring the leak.  On 24 May, there was 24 inches of water in the hold. To make the ship lighter, four guns were thrown overboard and then some of the masts were lowered down.  One of the other ships in the convoy was the St Vincent.  On 25 May Captain Thomas Talbot Harington, commander of the Ganges, went on board the St Vincent. He asked the commander, Captain Charles Jones, whether some passengers could change ships. Jones refused as the St Vincent was also leaking. However he agreed to stay close by.

On 26 May, the weather was fine. There were hopes that they would reach the Cape safely.  The next day, Harington gave orders to throw more cargo overboard.  The passengers helped the crew to do this and also to pump out water from the hold.  The guns on the main deck were thrown overboard.  Now the Ganges was less able to defend herself against attack.  The Ganges made constant signals of distress.  The St Vincent did not reply.

The passengers believed that they would die that night. Darkness fell and the ship was rolling heavily.  At midnight, an officer thought he saw a light.  He went to tell the captain.  Three hours passed before they saw the light again.  At dawn, it was clear that the St Vincent was astern.  The Ganges sent a signal: ‘The Ship is Sinking. Sent Boat’.  The sea was rolling so violently that it was difficult to get people into the launch.  The first passengers left just before 1pm.  The last boat, with Harington and Rolleston on board, reached the St Vincent at 9pm.

The next day, 29 May, the Ganges was still visible.  Harington and Rolleston went to her in a launch to see if they could salvage anything.  They could not and returned to the St Vincent. They had just reached her when the Ganges sank in one minute.  She went down with her masts standing, except one.  All hands and passengers had been saved, but presumably any animals on board had been left to drown.  Rolleston finished his account with ‘gratitude to my Creator’.

After this traumatic experience, Samuel Rolleston settled in England. The family home was Pan Manor on the Isle of Wight.  He was twice married and had two children. Rolleston died in 1860 aged 84.

A Passage to India - Shipboard Life - Join us on 19 June to hear more about the experiences of voyagers between England and India as revealed in their private papers.

Posted by Margaret.Makepeace at 09:35:00 in Journeys , South Asia

Posted by Margaret.Makepeace at 9:35 AM