Three men and a boy (and a coal mine…)

In 1735, three men and a boy from an unassuming village near Bristol made the headlines. As one cheaply printed broadside says, “amongst the many and various accounts which have been given us of accidents happening to mankind, nothing has occur’d more particular for many years than the following account from Bristol”. 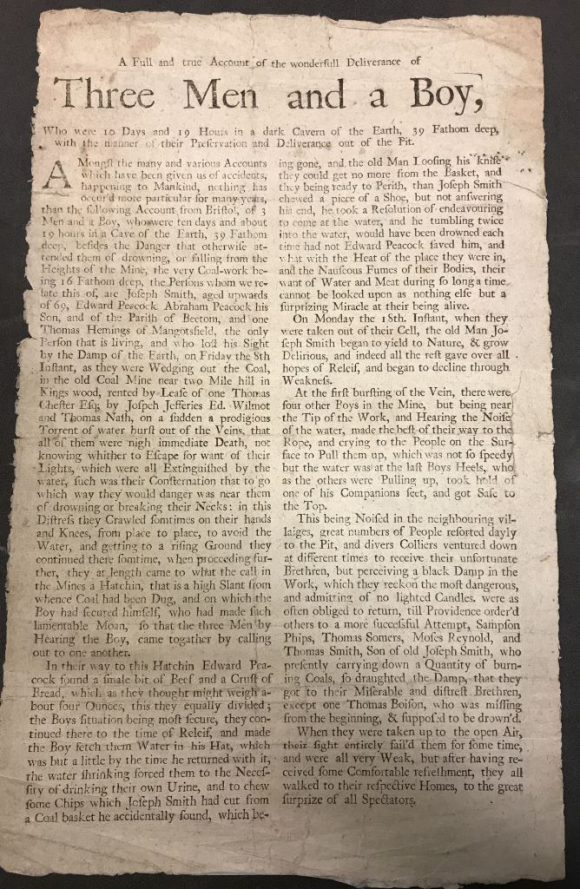 A full and true account of the wonderfull deliverance of three men and a boy. Bristol, c.1780.

Joseph Smith, 69, Edward Peacock, Abraham Peacock (his son) and Thomas Hemings of Mangotsfield worked in an old coal mine near Two Mile Hill in Kings Wood. In the early 18th century, coalfields were divided into ‘liberties’. Aristocratic families owned these liberties and leased the mining rights to master colliers, the so-called ‘adventurers of the coal mines’. This particular mine was owned by the Chester family and run by one Joseph Jefferies.

On this fateful day a “prodigious torrent of water burst out of the veins”, spelling “nigh immediate death” for the miners. Their candles were extinguished instantly and the mine began to flood. As the water rose, the men scrabbled for higher ground until they found a “hatchin”, a local term meaning a “high slant from whence coal has been dug”.

They huddled together on this ledge, in the darkness, for 10 days and 19 hours. They divvied up a bit of beef and a crust of bread between themselves and drunk their last drops of water. As the days passed, desperation forced them into “drinking their own urine”, chewing on coal chips and even “a piece of shoe”.

Why did it take so long for the miners to be rescued? Well, the colliers on the surface tried several times to go down into the mine and rescue their “unfortunate brethren” but they suspected a “black damp in the work”. Black damp is a noxious mixture of poisonous gas that eliminates oxygen from the atmosphere, causing suffocation. It’s common in mines and, nowadays, there are safety measures in place to combat this but in the early 18th century there were none.

Eventually, a last ditch rescue attempt was successful. The rescuers apparently carried down a “quantity of burning coals” and “draughted the damp” so they could reach the miners. The writer of this broadside declares that, “what with the heat of the place they were in, and the nauseous fumes of their bodies, their want of water and meat during so long a time,” the survival of the miners must be considered “nothing else but a surprising miracle”.

So what happened next? A long spell in hospital? Early retirement? Nope! These miners were made of tougher stuff than that. They received some “comfortable refreshment”, walked to their respective homes and faded into obscurity as local printers found another melodramatic story to report. And that was the end of that!