Today is Whit Monday, the Christian holiday traditionally celebrated the day after Pentecost.  In June 1892, Whit Monday and Whit Tuesday were celebrated in The Potteries with two splendid fetes at Queen’s Park in Longton. 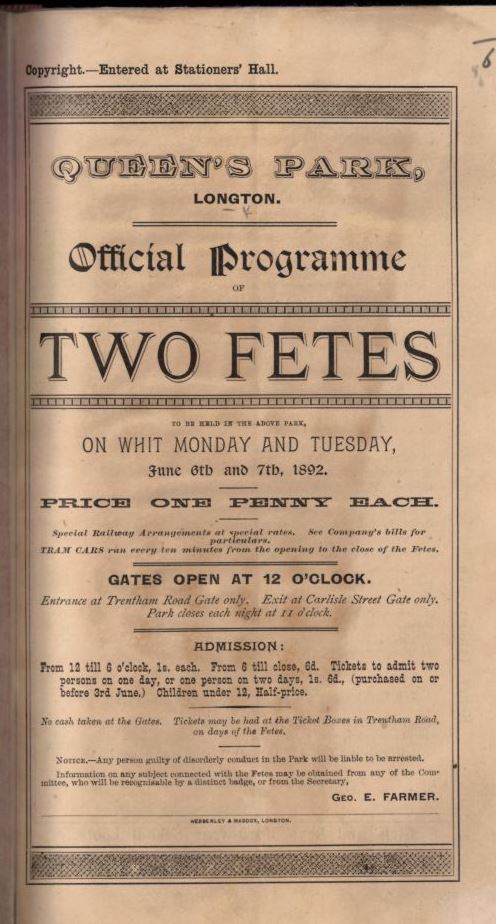 A copy of the official programme has found its way into the British Library collections. It reveals an exciting variety of events provided for an admission fee of one shilling.  Thousands flocked to the park in glorious weather.  Members of the organising committee wearing badges were on hand to help visitors.  A warning was issued that anyone guilty of disorderly behaviour was liable to be arrested. 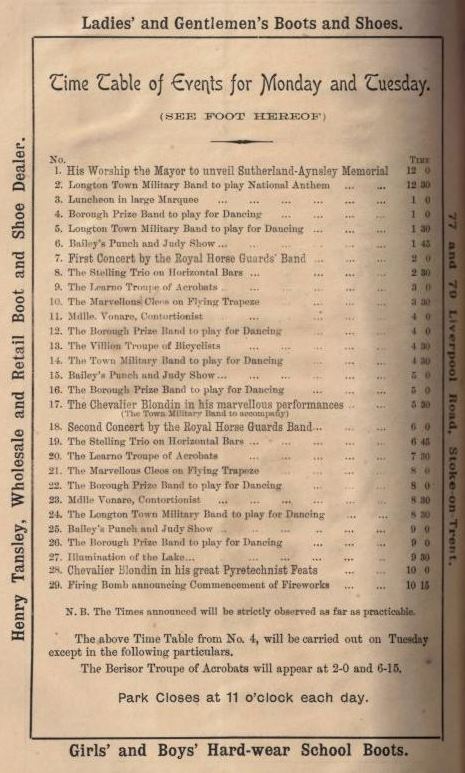 The Town Military Band played music for dancing at regular intervals, and there were concerts by the Band of the Royal Horse Guards.  Acrobats, bicyclists, a contortionist, and a Punch and Judy show entertained the crowds.

But to me the star attraction appears to be the elaborate firework display staged by Pain and Sons of London on both evenings. 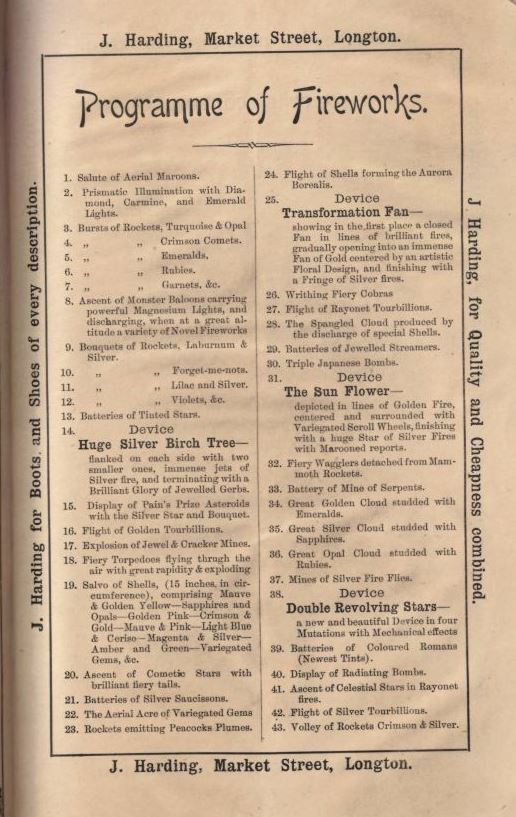 The description of the fireworks covers two pages of the programme and surely cannot fail to spark the reader’s imagination. Try to picture these fireworks exploding in the night sky and the reaction of the spectators –
• Discharge of Shells, (18 inches in circumference), introducing Silver Rain & Sapphires, Magenta and Silver, Amber & Dark Blue, Mauve & Green, Purple & Mauve, Golden Yellow, Mauve & Pink, Garnets & Opals etc.
• Parisian Novelty Rockets emitting Silver Threads
• Transformation Fan - showing in the first place a closed Fan in lines of brilliant fires, gradually opening into an immense Fan of Gold centered by an artistic Floral Design, and finishing with a Fringe of Silver fires.
• The Sun Flower – depicted in lines of Golden Fire, centered and surrounded with Variegated Scroll Wheels, finishing with a huge Star of Silver Fires with marooned reports.
• The Skeleton Acrobat – representing a life-sized human performing Skeleton on an horizontal bar, and going through a variety of fantastic performances.
• Display of Signal Rockets with Aerial Wrigglers.
• Grand Concluding Device of The Carnival of Venice (St Mark’s Square en Fete) – Beautifully portrayed in lines of fire of choice colour, with Gondolas passing and repassing on Grand Canal. Aquatic Fireworks etc. Followed by a Grand Flight of Large Coloured Rockets.

After learning about the Skeleton Acrobat, I’m not sure that modern New Year firework displays will ever again seem so special to me.