A Court Martial in India

Here’s a second instalment in the life of John Thompson born in Antwerp on the tenth day of Floreal, Year Twelve.

Thompson was appointed as ensign in the East India Company’s Bombay Army on 27 March 1821 and arrived in India in August that year.  He was promoted to the rank of Lieutenant in the European Regiment on 10 June 1822.  An uneventful spell of ten years’ service passed. 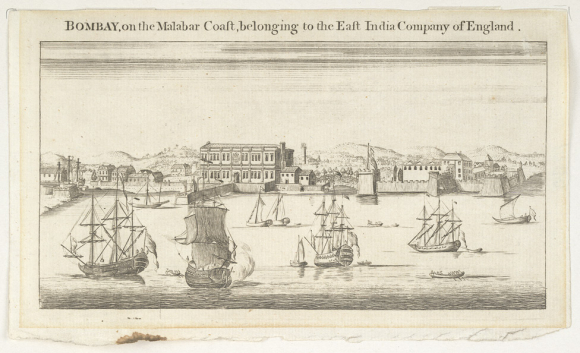 'Bombay on the Malabar Coast belonging to the East India Company of England.' Reduced version of the engraving by Jan Van Ryne of 1754. Online Gallery

However on 22 April 1831 the commanding officer of the regiment suddenly ordered an immediate inspection of the money bags and account books of each company.  Thompson was paymaster of his company but was unable to attend the audit as he was unwell.  He ordered his Pay Sergeant to make out the men’s accounts and to insert a debt of 707 rupees owed by Thompson.

Later that day, Thompson was arrested. He tendered money to pay the debt but this was refused.  On 9 June 1831 he appeared at a Court Martial held in camp near Deesa charged with embezzlement.

Thompson was charged for conduct unbecoming the character of an officer and a gentleman in having embezzled monies entrusted to him for the payment of the men of the 6th Company under his charge. The Court found Thompson guilty of embezzlement but without intent to defraud.  It acquitted him of ungentlemanlike conduct.  He was sentenced to be dismissed from East India Company service and was ordered to make good the deficiency.  The verdict was accompanied by a unanimous appeal for mercy as the members of the Court felt that the punishment they were compelled to award was disproportionate to the degree of offence committed.

Major General J S Barns, Commander of the Forces, confirmed the punishment but put on record his marked disapprobation of the Court’s finding that the embezzlement of public money was not conduct unbecoming the character of a gentleman.  Thompson was struck off the strength and ordered to take passage to England.

In November 1832 Thompson wrote to the Company Directors in London asking to be restored to the service.  On 29 January 1833 his request was rejected.  But the Company decided to grant him an annual allowance of £50 because of the Court Martial recommendation for mercy, the strength of testimonials produced by Thompson, and his distressed situation. 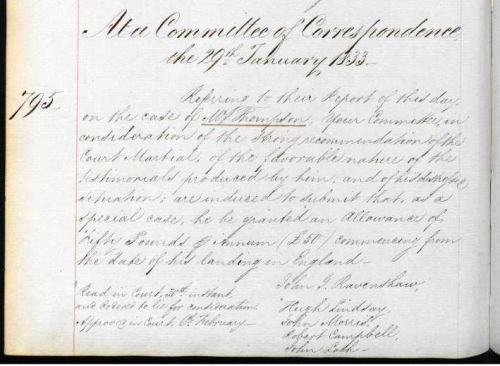 When John Thompson’s father William made his will on 8 December 1832, he directed his trustees to apply funds from his estate to support and maintain his son John for life.  John’s share of another bequest in the will was to be held in trust for him, rather then paid directly as was the case with his three brothers.  William Thompson was clearly concerned to protect his son from further financial mishaps.