Flouting Laws for his Cause: John Flavell’s FAQs

John Flavell (1630-1691) was a Presbyterian preacher from Dartmouth, who overtly disobeyed both the ‘Uniformity Act’ of 1662, and the ‘Five Mile Act’ of 1665. These acts prohibited those who opposed the Church of England’s structure from preaching or living within five miles of their parish. Presbyterian ministers, including Flavell, refuted the bishop-centric hierarchies of the Church, and he was expelled.

However, Flavell went to extraordinary lengths to reach his followers. He spoke to his flock in a forest, preached in private houses at midnight, and sermonised on the Saltstone, a ledge in the middle of the Salcombe estuary (quickly evacuated when the tide was on the turn). He also dressed as a woman to ride through town and perform a baptism.  Pursued by riders, he fled into the sea, where both he and his steed swam to the next bay in order to escape persecution. 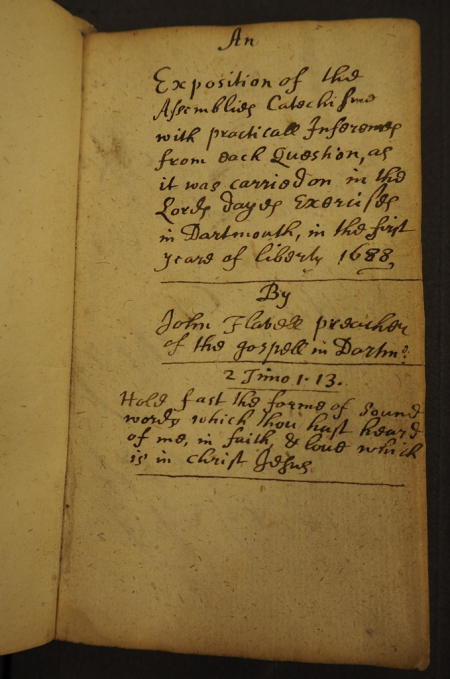 Although he was publicly vilified, with antagonists burning an effigy of him in 1685, Flavell continued to preach, and to write extensively about his spiritual learning. An Exposition of the Assemblies Catechism (Add MS 89247) is set out in a ‘frequently asked questions’ format, with answers providing clarification of small topics such as ‘Man’s Chiefe Ende’ and ‘God’s Truth’. The answers are not merely derived from his work as a preacher, but cited from specific bible verses. 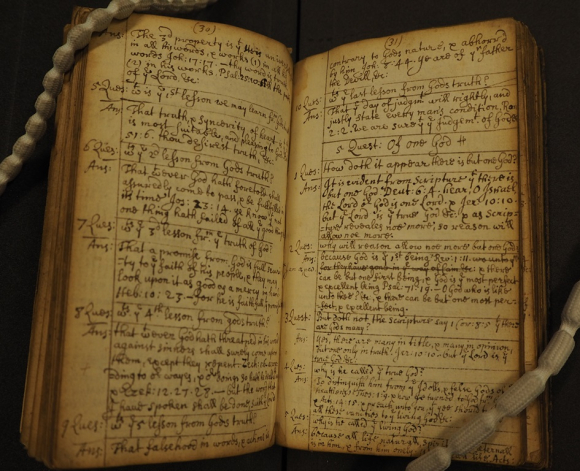 When published in print, this text, like other works published by Flavell, would become exponentially popular with notable puritanical figures such as Increase Mather, rector of Harvard University from 1685-1701, and who was involved with the Salem Witch Trials.

This manuscript notebook, suspected to be composed mainly of autograph script by Flavell himself, could be partially copied from the printed edition of Flavell’s work, as the first page mirrors exactly the frontispiece from the 1692 printed edition, leaving out only the publisher’s details. 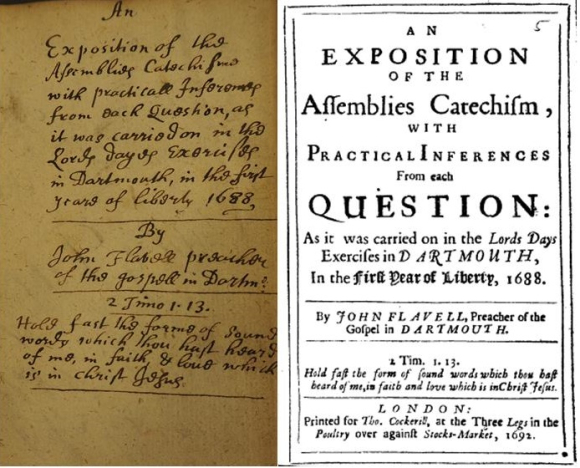 Considering Flavell died in 1691, references to the 1692 printed version are most unlikely to be his doing. However, the presence of Flavell’s hand for the majority of the book suggests that it could have been a fair copy that later fell into the possession of the inscribed ‘Mary Davey’, who wrote ‘A covenant drawn up between God and my own soul’ at a later date than Flavell’s ‘Exposition’. Her ink can be seen throughout the subsequent pages, suggesting she used it as a personal prayer book. The last page ends mid-sentence: ‘We know that an idol is nothing in the world, or that...’, leaving the final question unanswered, and raising more about the overlap between manuscript and printed texts, the circulation of recusant religious texts, and issues arising from personal archives. The legacy of the text is wide reaching, considering its clandestine origins in sermons preached in an estuary at midnight.