Frank Derrett: With the 'Cook's Tourists' in Salonika

During the centenary of the First World War, we have been remembering the staff of the library departments of the British Museum listed on the memorial to British librarians at the British Library.  Today we remember 531860 Private Frank Derrett of the 2/15th (County of London) Battalion of the London Regiment, the Prince of Wales's Own Civil Service Rifles, who died of wounds on 22 July 1917 at Salonika (Thessaloniki) in Greece.

Frank Derrett was born at London in 1883, the son of John William and Emma Derrett, who lived at James Street, Marylebone.  Census records from 1871 and 1881 describe John William Derrett as a china and glass dealer, and Emma continued running the business after his death in 1889. The 1911 Census shows 63-year-old Emma Derrett living at 35 James Street with three sons (including 27-year-old Frank), two grandchildren, and two boarding valets from Switzerland.  Frank Derrett married Alice Edmunds at Marylebone in 1912, and they had a son Frank Lionel.

Frank Derrett joined the British Museum as a Boy Attendant in the Department of Printed Books on 23 January 1899.  At the time of his death, he had worked for the museum for 18½ years, from August 1903 as an Attendant in the Reading and Newspaper Rooms.

Frank Derrett enlisted in the Civil Service Rifles in September 1915, becoming part of its second line battalion.  Throughout the war, the 2nd Civil Service Rifles formed part of the 60th (2/2nd London) Division, which served on the Western Front from June 1916 before moving to Salonika in November 1916.

The Macedonian Front is one of the lesser-known theatres of the First World War.  A small Franco-British force first arrived in Salonika in October 1915, ostensibly to support the Serbian army.  While the force arrived too late to prevent a Serbian reverse, it remained and consolidated on Greek soil, establishing a defensive line in Macedonia. 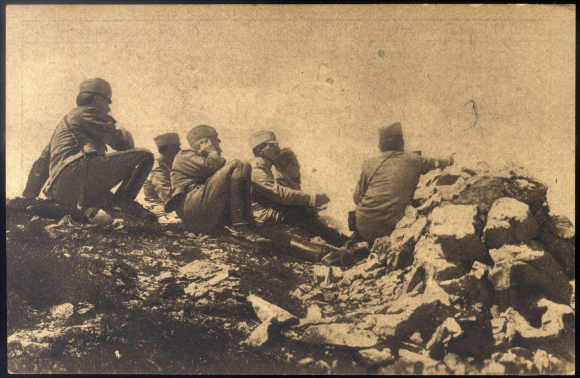 The commander in chief of the Serbian army, His Royal Highness Regent Alexander, with other high-ranking officers on the battlefield in Macedonia. World War One Collection Item

The 2nd Civil Service Rifles spent some time at Katerini before undertaking an epic seven-day march to Kalinova in March 1917.  As part of 60th Division, they played a supporting role in offensives near Lake Doiran (Dojran) on 24 April and 8 May 1917.  In the following days, the battalion had a tough job consolidating positions on hills known as the Goldies, which is where they suffered the majority of their active-service casualties during the whole campaign.

By early June, however, the 60th Division was already on its way back to Salonika, having been posted to yet another theatre of war. The 2nd Civil Service Rifles sailed to Egypt on 19 June, from where they would take part in the campaign in Palestine (the frequent travels of the battalion gained it the nickname, the "Cook's Tourists").  It seems that Private Derrett was left behind in Greece, either in hospital or attached to another unit. He died of wounds on 22 July 1917 aged 34, and is buried in Salonika (Lembet Road) Military Cemetery in Thessaloniki.

Posted by Margaret.Makepeace at 09:00:00 in Domestic life , Journeys , World War One