Miss Jenny and another cheetah came to England in 1764. They were part of a collection of animals despatched from India by George Pigot, the Governor of Madras, who had made a vast collection of foreign curiosities, ‘particularly wild beasts’. The cheetahs were fortunate to survive the long voyage which sadly proved fatal to many of the animals. 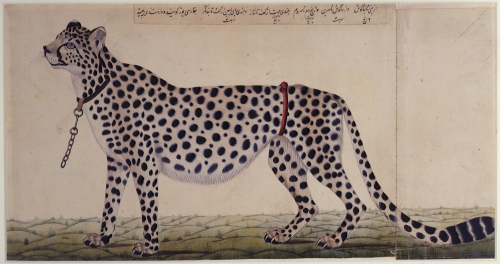 The cheetahs and their Indian handlers were temporarily taken in by the Duke of Cumberland who had been an enthusiastic collector of exotic animals which he kept at Windsor until a tiger escaped and mauled and killed a young boy. The tragic incident led him to send his exotic animals to the Royal Menagerie at the Tower of London. Sometimes he still took temporary care of animals on their way to new homes, including the cheetahs brought to England by George Pigot.
On 30 June 1764 the Duke of Cumberland organised an event at Great Windsor Park to put one of these visiting ‘tyger-cats’ on show. The cheetah was set loose to hunt a stag that had been placed in the Park but the demonstration of the cheetah’s hunting skills did not initially go well. After being tossed by the stag’s antlers the cheetah broke free, evaded the netting meant to confine it, and escaped into the forest where it proceeded to kill a roe deer. The Indian handlers caught the cheetah and let it feed on its prey. Manchester Art Gallery has a painting by George Stubbs of the cheetah at Windsor.

Miss Jenny now has a different incarnation as the cheetah guiding children around the History Detectives family trail in a new exhibition Connecting Stories: Our British Asian Heritage. 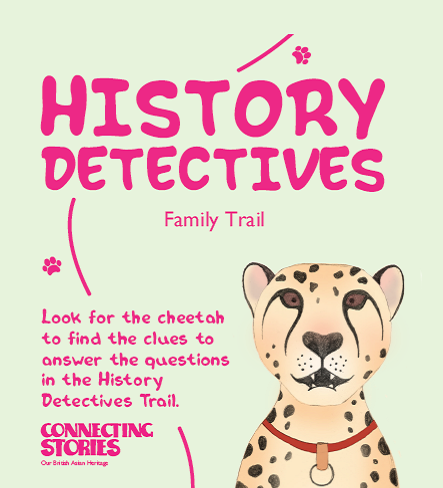 This family-friendly exhibition tells the story of the close connections between Britain and India, Pakistan and Bangladesh from 1600 to the present day. It shows how those connections have influenced our food, culture, fashion, politics and heritage and made us who we are today.