Born in the Netherlands in 1698, Paul Fourdrinier trained in Amsterdam before moving to London in 1720, where he established a highly successful business at Charing Cross. Although he created a wide range of illustrations and maps, he was particularly well known for his work with architects: according to George Vertue, his architectural engravings were ‘remarkable… many are very curious and neatly done’ (‘Vertue’s Notebook’, 136). 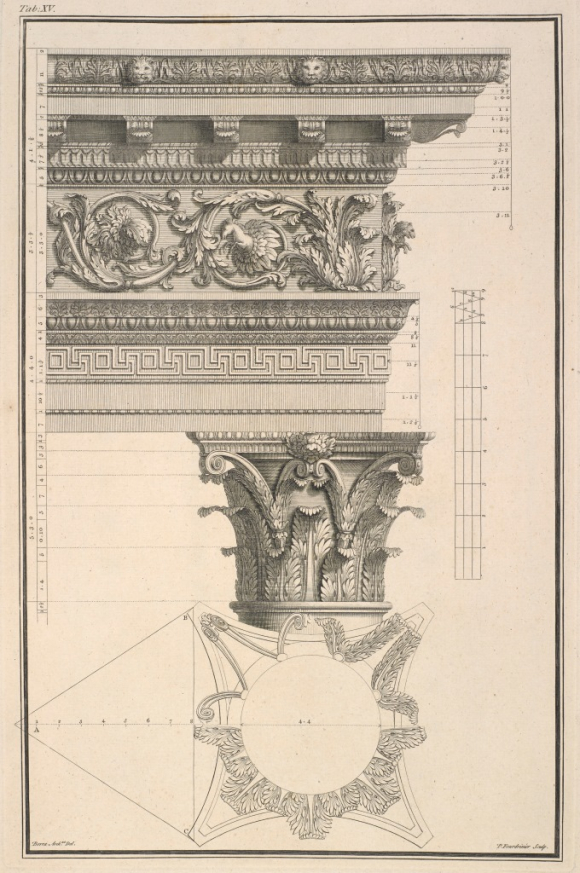 During a career which lasted over thirty years, Fourdrinier worked with many of Britain’s leading architects. Because architectural books are conventionally identified as the work of the architects whose drawings they are based on, his plates have rarely been treated as a unique body of work. His work appeared in numerous publications: The Designs of Inigo Jones (published by William Kent, 1727), Robert Castell’s The Villas of the Ancients (1728), Andrea Palladio’s First Book of Architecture (rev. Colen Campbell, 1728), Fabbriche Antiche Disegnata da Andrea Palladio (published by Lord Burlington, c. 1730), Isaac Ware’s Designs of Inigo Jones and others (1731) and The Plans, Elevations and Sections, Chimney Pieces and Ceilings of Houghton in Norfolk (1735), Charles Labelye’s A Short Account of the Methods Made Use of in Laying the Foundation of the Piers of Westminster-Bridge (1739), Stephen Riou’s The Elements of Fortification (1746), James Gibbs’s Bibliotheca Radcliviana (1747), John Wood’s An Essay towards a Description of Bath (rev. edn, 1749) and A Dissertation upon the Orders of Columns (1750), Francis Price’s A Series of Particular and Useful Observations, Made with great Diligence and Care, upon that Admirable Structure, The Cathedral-Church of Salisbury (1753), Robert Wood’s The Ruins of Palmyra (1753) and The Ruins of Balbec (1757), Isaac Ware’s A Complete Body of Architecture (1755–57), William Chambers’s Designs of Chinese Buildings (1757) and A Treatise on Civil Architecture (1759), and James Stuart and Nicholas Revett’s The Antiquities of Athens (1762). 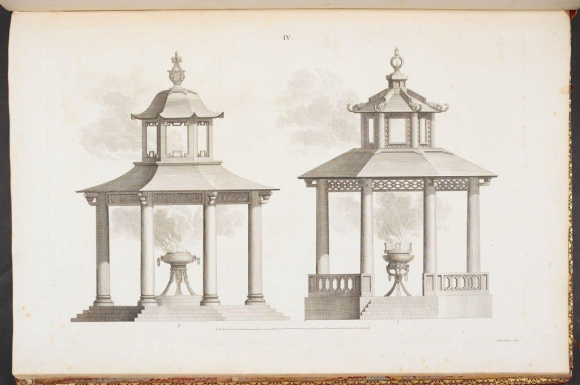 These publications encompass a tremendous range of building types and architectural styles, and in each one Fourdrinier’s exceptional talents were fundamental to the success of the project. Outstanding precision of line was required, and specific graphic conventions were deployed for depth: key tonal differentiations which represented the surfaces of elevations include ‘plain white for smooth ashlar in sunlight; flecks for rough-dressed stone in sunlight; horizontal hatching for half-shading of ashlar; cross-hatching for voids; diagonal cross-hatching for cast shadows, &c’ (Mark J. Millard, 361). 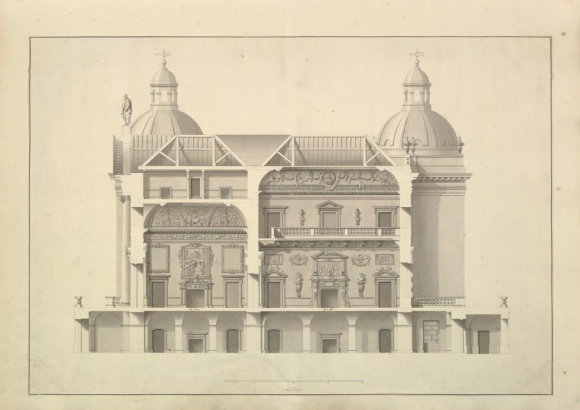 Fourdrinier’s reputation for exquisite architectural plates was such that his involvement in a project became part of its commercial appeal. His contributions were regularly highlighted in the advertisements for the different numbers of Ware’s A Complete Body of Architecture. In an advertisement published on 25 August 1756, the Gazetteer and London Daily Advertiser reported that the upcoming number not only included two of Fourdrinier’s plates, but that his work would be standard: ‘The Publick may depend that all the Plates of this Work, will for the future, be executed in the same masterly Manner.’ Today, the masterly details of Fourdrinier’s plates speak for themselves.

Posted by Margaret.Makepeace at 08:30:00 in Rare books , Visual arts