Duncan Campbell: the Private Contractor and the Prison Hulk

In 1776 Duncan Campbell (1726-1803) became the first superintendent of prison hulks stationed at Woolwich.  After the outbreak of the American Revolution in 1775, Britain was barred from transporting its felons to the colonies, where they had previously served sentences carrying out non-plantation labour.  The war with America caused a prison housing crisis; gaols in Britain could not cope with the volume of unexpected inmates and so in 1776 the Criminal Law Act, also known as the Hulks Act, was passed.

The act stated that convicts awaiting transportation would be employed in hard labour for ‘the benefit of the navigation of the Thames’.  At Woolwich, major dredging was needed to correct a drift in the river, and convicts provided a cheap workforce.  While their employment had been decided, the matter of housing hundreds of convicts was unresolved.  The state was unwilling to invest in new prisons as they were under economic strain from ongoing wars with both America and France.  A cheap and mobile solution was proposed; disused and dismantled warships, known as ‘hulks’ were to be used to house convicts along the banks of the Thames. 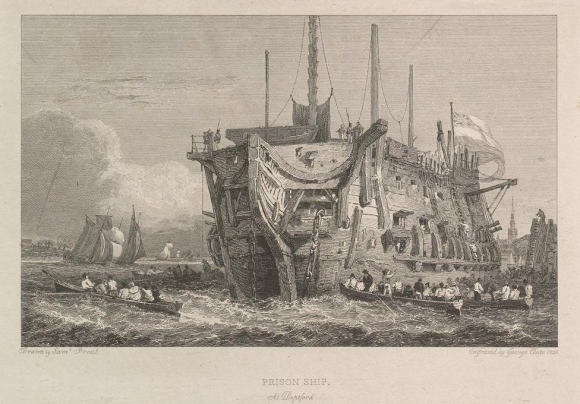 Duncan Campbell, who previously held the contract for transporting felons to Virginia, was successful in lobbying for the management of the hulk establishment. He proposed to use his ships, the Justitia and Censor, to house convicts at Woolwich.  Campbell’s attention was divided during the twenty-year period of his tenure; his niece was married to Captain William Bligh, commander of the HMS Bounty, the family’s estate Saltspring in Jamaica brought in returns of sugar and rum, and he was involved in lobbying for repayment of debts owed by America to British merchants, culminating in a meeting with Thomas Jefferson in 1786.

As a private contractor, Campbell’s management was subject to little regulation; quality of food was poor on the hulks, gaol fever -which became known as hulk fever- periodically ripped through the decks, and few medical or religious services were provided. Prison hulks drew the attention -and criticism- of prison reformers John Howard and Jeremy Bentham and after two years at Woolwich, a committee of inquiry headed by Sir Charles Bunbury in 1778 revealed appalling death rates; men were dying at a rate of one in four.  Despite these shocking figures, the system was allowed to continue, with some small improvements.

The hulk system under Campbell was not stable. He employed deputies and overseers who patrolled the decks of the hulks and the shores of the riverbank but escape and outbursts of violence occurred regularly.  Overseers were said to be afraid to descend the decks at night when lights were extinguished and portholes were shut.  Lacking clear instruction from the Home Office, Campbell was frustrated. In letters to officials, he asked if more could be done for men after they had served their sentences to stop them re-offending but few solutions were provided.  In 1802, Campbell’s contract was not renewed.  The system moved to more direct government control but the temporary measure of housing convicts on prison hulks continued for another fifty-five years, up until 1857.

Posted by Catherine Angerson at 08:30:00 in Commerce , Crime , Modern history