The exhibition Connecting Stories: Our British Asian Heritage features extracts from letters written by two soldiers of the 33rd Punjab Regiment fighting on the Western Front during the First World War. The Censor of Indian Mails gathered information about the morale of the soldiers, and would prepare regular reports for the information of Government and the Army, appending translated extracts of soldier’s letters to illustrate his reports. The Censor’s reports and soldier’s letters are part of the India Office Records held at the British Library. 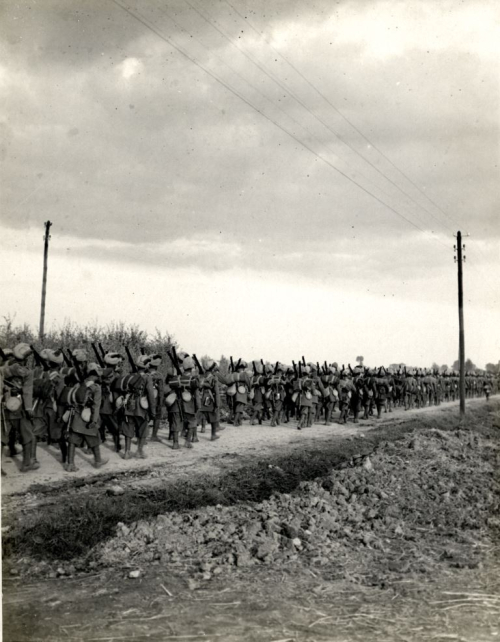 The Punjab Regiment suffered heavy casualties in the fierce fighting in Flanders in 1915, and the letters reflect the extreme stress the two soldiers were experiencing. Of these letters and others from soldiers of the 33rd Punjabis, the Head Censor commented that the writers appeared to be dejected, and that the regiment had lost nearly all its British officers. Subadar Pir Dad Khan wrote in Urdu from the front on 2 October 1915 that “This country, which is in the likeness of Paradise, now seems to me worse than Hell! (because of the bad news which comes from the Regiment)”. 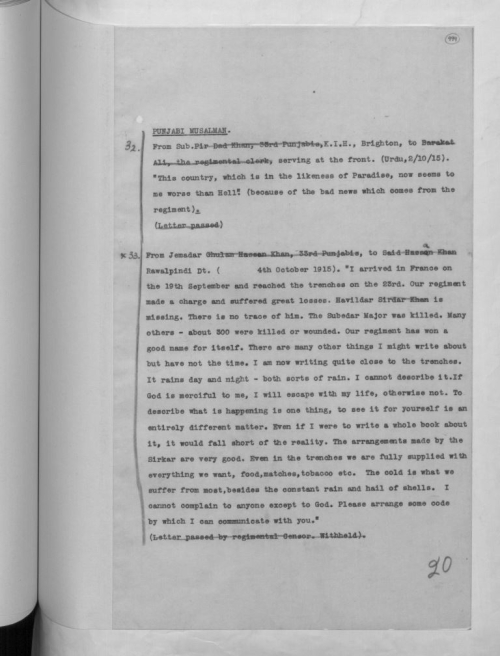 Jemadar Ghulam Hassan Khan was writing to a friend or family member in Rawalpindi in the Punjab in early October 1915. He wrote that he arrived in France on 19 September 1915, and by 23 September he had reached the trenches. The regiment immediately went into action, suffering great losses, but achieving a good name for itself. Writing close to the trenches, he noted that “It rains day and night - both sorts of rain. I cannot describe it. If God is merciful to me, I will escape with my life, otherwise not. To describe what is happening is one thing, to see it for yourself is an entirely different matter. Even if I were to write a whole book about it, it would fall short of the reality.” He went on to say that the men were fully supplied with everything they wanted in the way of food, matches, tobacco, etc., but that “The cold is what we suffer from most, besides the constant rain and hail of shells. I cannot complain to anyone except God.” A note by the Censor at the end of the letter says that the letter was passed by the Regimental Censor, but subsequently withheld. This was more than likely due to Ghulam Hassan Khan’s closing instruction to his correspondent to arrange a code so they could communicate with each other more secretly.

The reports of the Censor of Indian Mails in France, including extracts from soldiers’ letters can be found online.

Posted by Catherine Angerson at 08:30:00 in Conflict , Modern history , War , World War One