Illuminations in celebration of the peace

In 1814, after almost 20 years of war with France, Britain and the coalition forces defeated Emperor Napoleon Bonaparte (1769-1821). With the French leader exiled and the Hanoverian Kings marking 100 years of sovereignty, there was a lot to celebrate, and in the summer of 1814 London's parks played host to a scheme of spectacular entertainments. Free and available for all to enjoy, the events were depicted in brightly coloured prints, such as these examples from the King's Topographical Collection. 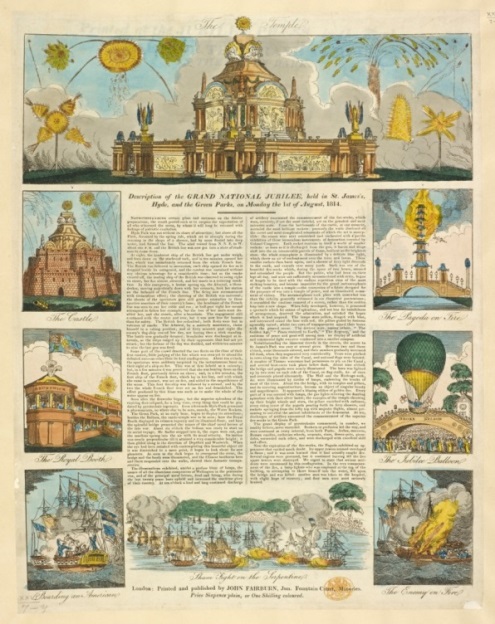 Arguably the most magnificent spectacle was the Temple of Concord, created in commemoration of peace treaties. The Temple was unveiled in a hugely theatrical show. It was initially concealed from view within the walls of a gothic castle, around which a mock siege was performed with cavalry, artillery and rockets. When the siege reached a dramatic climax the walls of the Castle were dilapidated to reveal the Temple in all its dazzling glory. Unveiling the Temple in this way was seen as highly symbolic of the transition from war to peace. 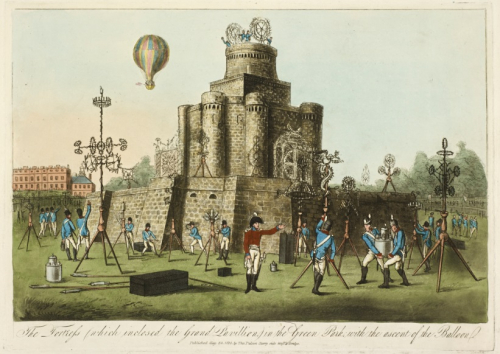 The mastermind behind the Temple was Lieutenant Colonel Sir William Congreve (1772-1828), a rocket designer and Comptroller of the Royal Laboratory at Woolwich. He had served many campaigns throughout the Napoleonic War (1803-1815), and led a company known as the 'rocket brigade' at the Battle of Leipzig in 1813. 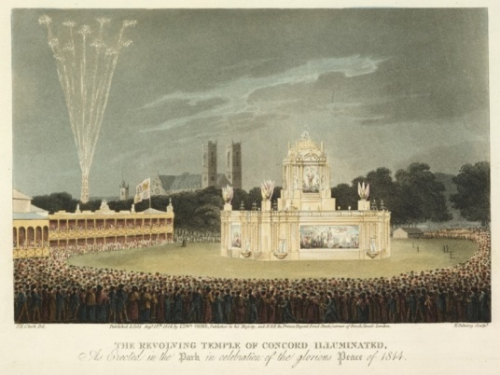 The Temple revolved so everybody could see its lavish decorations, rendered on semi-transparent fabric lit from behind with rows of oil lamps. Congreve had commissioned some of the nation's best artists like Thomas Stothard to design and paint allegorical scenes of these transparencies, each tableau praising 'the Triumph of England under the Regency'. Congreve had also designed a special type of firework, described by the magazine La Belle Assemblé as a rocket within which a 'world of smaller rockets' were contained so that as soon as it was discharged 'it bursts and flings aloft into the air innumerable parcels of flames, brilliant as the brightest stars'.

London's print sellers never missed an opportunity for business, so cheap and eye-catching prints like this would have been plentiful, and purchased as souvenirs for affordable sums at booths in the parks and print shops.

Over 500 views and maps from the King's Topographical Collection and other British Library holdings are available to view at https://www.bl.uk/picturing-places. Keep up to date with what's being discovered at: https://twitter.com/bl_prints.