A widowed father in his sixties sharing a small house with his ambitious, unmarried son in his thirties; running the household while his son runs the business.  Sounds familiar?  Steptoe and Son?  Try Turner and Son.

The great painter JMW Turner’s father, William Turner, was born in South Molton, Devon, in 1745, but moved to London around 1770, following in his father’s trade as a barber and wig-maker and settling in Covent Garden.  His wife Mary, sadly, suffered from a form of mental illness, which resulted in her being admitted to St Luke’s Hospital in Old Street in 1799 and then Bethlem Hospital in 1800, where she died in 1804. Her condition had not been helped by the loss of her daughter, Mary Ann, who died just before her fifth birthday in 1783.

In 1807, JMW Turner was a successful artist with a flourishing studio and gallery in Queen Anne Street, off Harley Street, and had recently been made Professor of Perspective at the Royal Academy.  Because of the Napoleonic Wars, most of his painting expeditions at this time were within the UK.  He also had a busy private life, which included a daughter born to his mistress, Sarah Danby, with another born later.  Turner needed somewhere to escape to for relaxation, so he bought a plot of land in Twickenham and designed a two-bedroom house, Sandycombe Lodge, which was built over the next five years.  In 1813 he moved in with his father, fondly known as “Old Dad”. 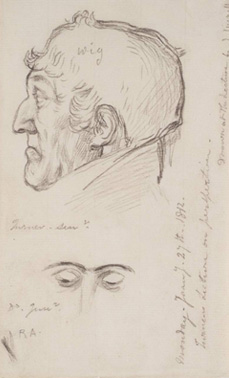 John Linnell’s drawing of Old Dad made in 1812, when he attended one of his son’s lectures at the Royal Academy. The eyes below are those of Turner, looking at his notes. Image © Tate CC-BY-NC-ND 3.0 (Unported).

Old Dad kept house for Turner and tended the plot of land, sometimes complaining of the hard work involved in controlling the rampant weeds. Turner Senior also acted as studio assistant, preparing and varnishing canvases, and initially walked the ten miles to Turner’s studio.  However, he swiftly made the connection between the local market gardens and Covent Garden and could often be seen sitting on top of the vegetables in the market gardeners’ carts, the agreed fare being a glass of gin. 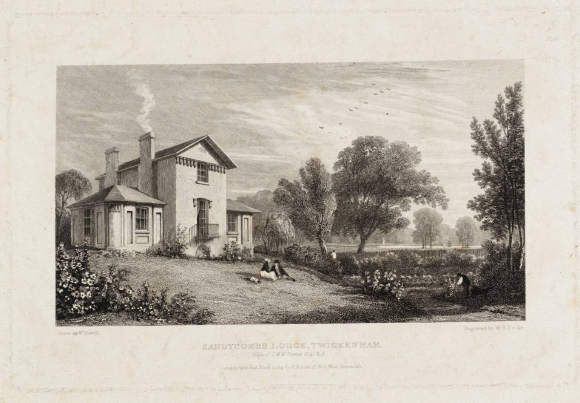 There are many visitors’ accounts of the good times that were had at Sandycombe Lodge, which was used for picnics, parties, fishing expeditions and the meetings of The Picnic Academical Club, a sort of artistic lads’ drinking society.  Old Dad played a central role in the organisation of these festivities.  According to an early biographer, Walter Thornbury, he was ‘very like his son in the face, particularly as to the nose...he had a habit of jumping up on his toes every two or three minutes which rather astonished strangers.  The father and son lived on very friendly terms together’. They certainly had a very close relationship and Turner was known to change his plans to be with his father on his birthday.

After 1815, Turner was able to travel more freely in mainland Europe and his visits to Twickenham became less frequent.  Old Dad’s health also began to fail and in 1826, Turner sold Sandycombe Lodge and moved his father back to Queen Anne Street.  This is the part of Turner’s life that is depicted in the film Mr Turner. Old Dad died on 21 September 1829 at the age of 84 and is buried in St Paul’s, Covent Garden (The Actors’ Church). 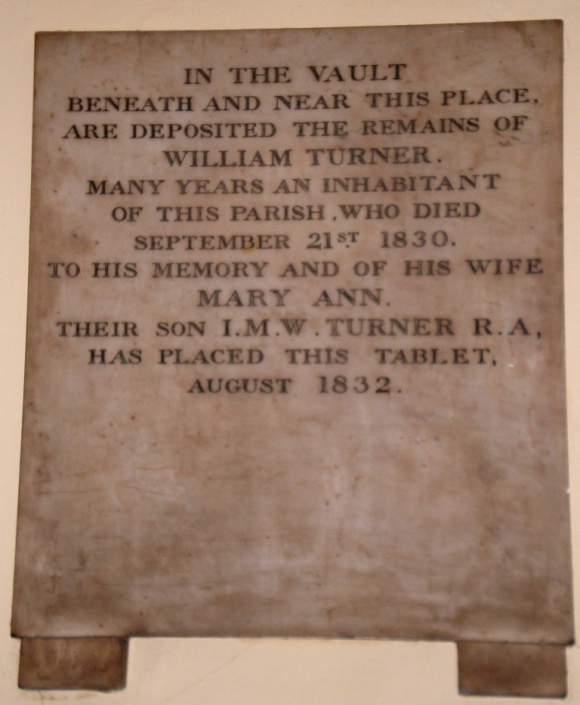 Old Dad’s memorial in St Paul’s Church, Covent Garden - photograph by the author. Unfortunately, his father’s year of death is wrong and Turner failed to pay the stonemason.

Sandycombe Lodge has recently undergone extensive restoration to return it to Turner’s original design and is now open to visitors. Twitter @TurnersHouse

Further reading:
J.M.W.Turner, R.A. The Artist and his House at Twickenham, Catherine Parry-Wingfield, 2012.
The life of J. M. W. Turner, R.A.; founded on letters and papers furnished by his friends and fellow academicians, Walter Thornbury, 1897.