Sir Hans Sloane as a collector of “strange news”

Sir Hans Sloane (1660–1753) was a major figure in the flourishing scientific culture of Enlightenment London, serving as both President of the Royal Society and President of the Royal College of Physicians. However, his greatest legacy lies in his vast collections of books, manuscripts, specimens and other objects, which after his death became the bedrock of the new British Museum, the ancestor of the British Library.

Sloane’s collections were particularly strong in natural history, medicine and travel, but their overall scope was astonishingly broad. Ongoing research into different parts of his collections is gradually uncovering more detail about their richness and variety. One product of this work is the Sloane Printed Books Catalogue (SPBC), a free and fully-searchable online database that records over 35,000 printed items from Sloane’s library (and counting).

To take just one example of the research possibilities provided by the SPBC – Sloane was a collector of “strange news”. “Strange news” was news of unusual or dramatic events, such as earthquakes, freak weather, monsters or medical marvels, usually accompanied by a supernatural interpretation, such as divine judgement or demonic influence. It typically appeared in the form of short printed pamphlets, bearing titles that promised accounts of “strange”, “miraculous”, “wonderful” or “extraordinary” events to their readers. 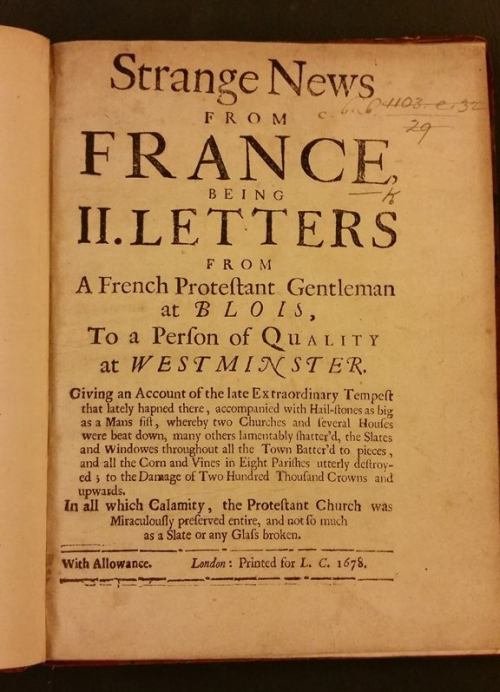 The SPBC lists 57 items with titles containing even just the word “strange”, alongside “news/newes/relation”. For instance, one pamphlet of “strange news from France” owned by Sloane provides an account of a storm of fist-sized hailstones that destroyed everything except – significantly – a Protestant church. Another of “strange and true news” tells of severe weather across the Midlands that saw snow smother some and floods drown others, depicted as God’s judgement for wickedness. A third relates a nine-foot-long winged serpent that terrorised the people of Essex – complete with frightening illustration. 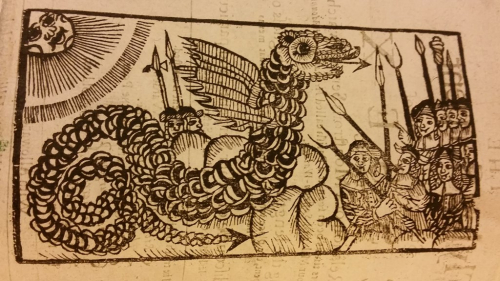 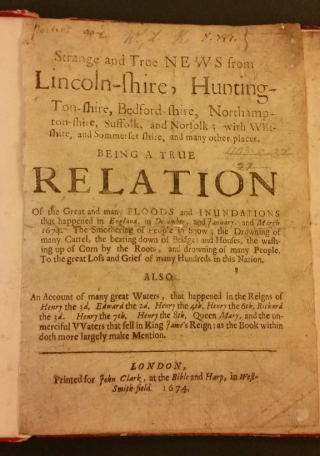 “Strange news” was part of a diverse and sophisticated culture of news in early modern England. Although this era saw the birth of the printed newspaper, which generally contained foreign or domestic politics, this was far from being people’s only source of news. Strange news was another – and very different – kind of news in circulation. Its popularity came partly from its raw sensationalism, but also from its supernatural explanations, which appealed to a religious and superstitious culture.

But why did Sloane, a man of science, collect strange news, which represents such a different mental world? Although it is impossible to be certain, there are several clues. Sloane once said he was curious about “very strange, but certain, matters of fact” – in other words, unusual natural phenomena – and accounts of dramatic earthquakes, storms and floods (if not of giant flying serpents) may have appealed to this desire to explain the bizarre-but-true. He may also have been interested in collecting the pamphlets’ supernatural interpretations specifically to expose them as false, as it has been argued that he acquired other objects for this purpose, such as “Quacks’ Bills” (dubious medical adverts) and “magical” tokens. Whatever the reason, Sloane’s collecting of “strange news” indicates that he may have been at the forefront of the Enlightenment, but his interests were not restricted to the products of the new science.

Further reading:
Delbourgo, J., Collecting the World: The Life and Curiosity of Hans Sloane (London: Allen Lane, 2017) – including discussion on Sloane’s attitudes to magic and the supernatural.
Mandelbrote, G., ‘Sloane and the Preservation of Printed Ephemera’, in G. Mandelbrote and B. Taylor, eds, Libraries within the library: the origins of the British Library's printed collections (London: British Library, 2009), 146-168.