A Dust-up in the Desert: Hostilities on the 1931 Citroën Expedition across Asia Sand hills of the Gobi Desert. Source: Francis Edward Younghusband, The Heart of a continent: a narrative of travels in Manchuria, across the Gobi Desert, through the Himalayas, the Pamirs, and Chitral, 1884-1894. British Library: 010057.i.7. Flicker: https://www.flickr.com/photos/britishlibrary/11235569366

On 1 June 1931, in the desolate heat of the Gobi Desert, French naval officer Lieutenant Victor Point beat up and threatened to shoot a Chinese government official.

Both Point and the Chinese official, Mr Hoh Ching-sheng, were part of a Sino-French scientific expedition organised by the industrialist André Citroën. The project, known as the Croisiere Jaune (Yellow Crossing) was led by the French explorer and General Manager of Citröen, Georges-Marie Haardt.

The expedition comprised two caravans of Citroën vehicles equipped with caterpillar tracks capable of tackling rough terrain. The first team was led by Haardt and embarked from Beirut, heading eastwards. The second team, led by Point, embarked from Beijing and headed westwards. The two team planned to converge somewhere in central Asia. 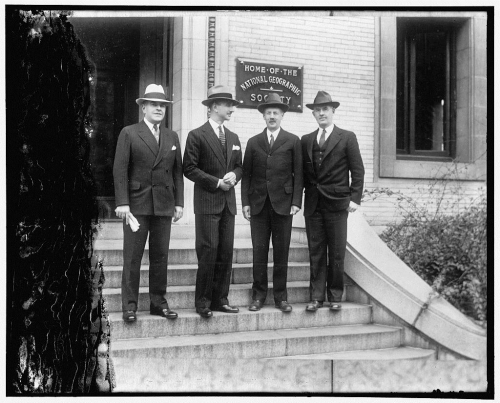 The aims of Haardt's project were much the same as other excursions by Europeans into Asia over the previous century: to collect scientific data, map previously uncharted regions, and explore the continent’s archaeological sites. Haardt took with him the latest technologies in colour photography and film production, as well as a team of artists, historians, archaeologists and geologists.

While Haardt’s progress through Syria, Iraq and Iran was relatively straightforward, Point’s trek through the Gobi Desert, in the Chinese province of Xinjiang, was beset with political difficulties. Throughout the 1920s Chinese attitudes toward western imperialism had hardened. Conscious of the reputations that many European explorers had acquired for plundering Asia’s archaeological sites for the benefit of museums in London, Paris and Berlin, Chinese officials were determined to impose tight restrictions on such expeditions, including those planned by Point through Xinjiang. These included a ban on the removal of antiquities, as well as on the taking of photographs and film footage. 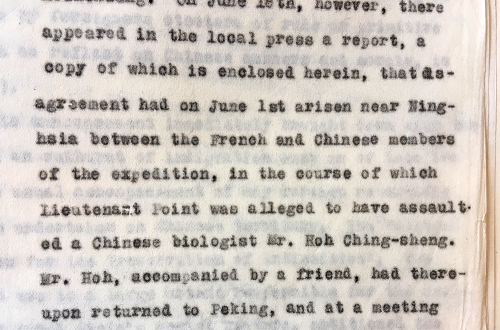 Extract of a letter from the British Minister in China, dated 23 July 1931, reporting on the incident involving Lieutenant Point and Mr Hoh Ching-sheng. IOR/L/PS/12/4237.

It was on this last point that Lieutenant Point came to blows with Hoh Ching-sheng. The newspaper The Peking Leader reported on 18 June that:

‘Lt Point was taking a motion picture of the surrounding landscape, when Mr Hoh unintentionally passed in front of the Frenchman’s camera […] in the altercation that ensued [Point] hit Mr Hoh right and left […] and said that he could shoot him [Hoh] if he wanted.’

The newspaper reported that the French party had repeatedly violated the terms of the agreement with their Chinese partners, and had ‘more than once taken pictures on the way of the disgraceful things of China, such as bound feet of the Chinese women’. In his own report of the incident, the British Minister to China commented on the ‘careless selection of French personnel to command the Chinese section of the Expedition.’

Point was eventually able to complete his part of the 1931 expedition. However, on his return to France the following year, he killed himself in a fit of jealousy, with a gunshot to the mouth, in front of his fiancé, the famous French actress Alice Cocéa.