The exhibition Connecting Stories: Our British Asian Heritage includes a number of items relating to the Bevin Trainees during the Second World War.  The Bevin Training Scheme was established in 1941 with the support of the British Minister of Labour, Ernest Bevin.  There was a greatly increased demand for skilled engineers in the Indian industries engaged in war-related work.  The scheme aimed to provide practical training for young Indians who otherwise would not have had the means to travel to Britain. 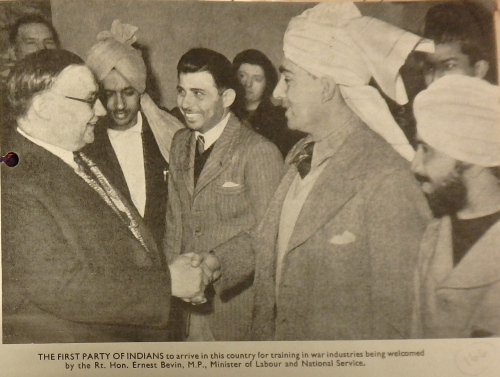 In total, around 900 trainees travelled to Britain in 14 batches between 1941 and 1947 to receive practical training in engineering.  The first eight batches consisted of about 50 trainees each, which was later raised to 90 to include aircraft mechanics and ship repair.  The period of training was initially six months, later increased to eight months.  Trainees spent part of their time in a Government Training Centre at Letchworth, before being sent for practical work experience in industries around Britain. 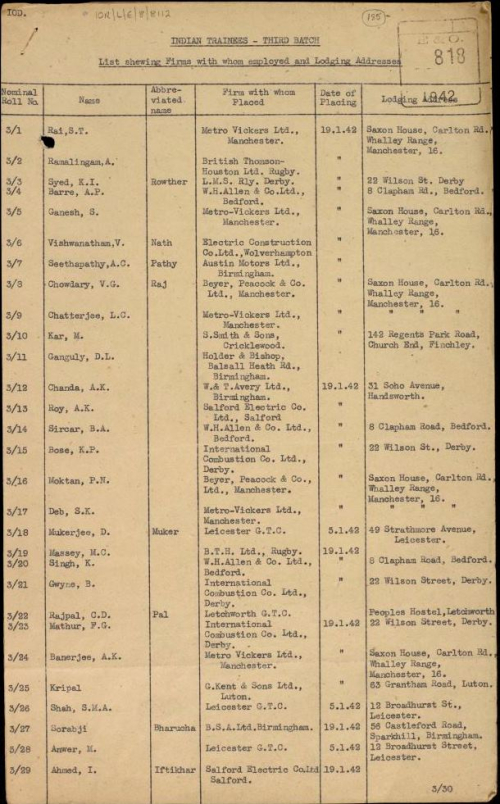 A file in the India Office Records at the British Library contains lists of the trainees from the first seven batches.  The lists give the names of the trainees, the British firms with whom they were placed, and the address of their lodging.  They show that the trainees were placed in a variety of firms engaged in a wide range of industrial activities, including shipbuilding, railways, car manufacture, steel production, tool manufacture, and aircraft production.  The exhibition highlights the many famous Birmingham companies the trainees were sent to, such as Austin Motors, BSA, W&T Avery, and the Birmingham Railway Carriage and Wagon Company. In 1944, the Government of India produced a booklet, entitled Ambassadors of Goodwill, to stimulate public interest in the scheme.  The booklet contains eight essays written by trainees who had returned to India, which were submitted as part of an essay competition held by the Indian Labour Department.  The trainees described their experiences and their impressions of war time Britain.  One trainee, N Sankeramurthi, described asking a London policeman for directions with the request “Hullo Cop, nice day! If you don’t mind please direct me to Trafalgar Square”.   Another trainee, M G Kulkarni, wrote of the many friends he made in England.  Trainee M Muzaffar Beg was particularly impressed with the work women did in British industries during the war, commenting “Motor factories, aeroplane factories, ammunition factories, etc., were all run by women”. 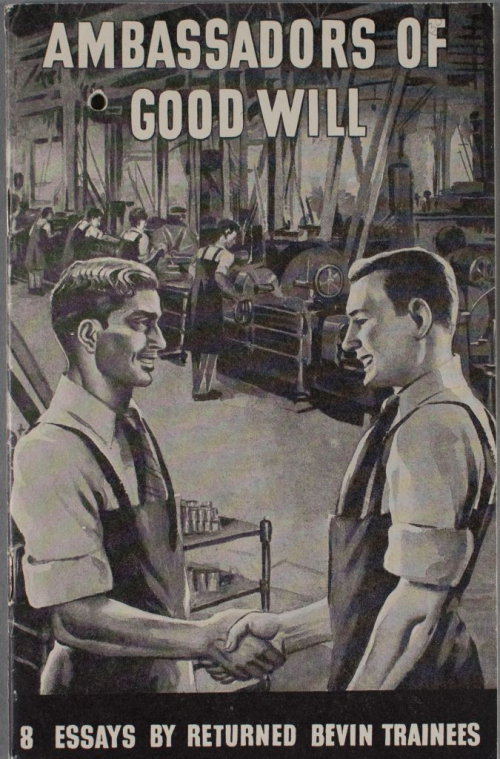 The writer of the essay which won first prize, G Mustafa Mahmud, keenly felt the importance of the scheme, commenting that “I went to England thinking that on me and other Bevin Boys depended the great industrial development for which India hoped when normal times returned”.

Bevin Training Scheme: papers not transferred to the High Commissioner for India, including lists of Indian trainees showing firms with whom placed and lodging addresses, May 1941-Sep 1947 [British Library reference IOR/L/E/8/8112]