'I have made resolutions to be good': letters of Princess Charlotte to her tutor

Can you imagine the 19th century without Queen Victoria? If the young Princess Charlotte, only legitimate daughter of the Prince of Wales, had not died in childbirth in 1817, aged 21, she could have succeeded her father George IV to the throne in 1830 – and perhaps been quite a different sort of Queen.

Charlotte was the only child of an unhappy marriage between George, Prince of Wales, and Princess Caroline of Brunswick. Her parents lived apart for most of their marriage and fought constantly over their daughter, at the same time neglecting her in a way that would seem cruel today. George was determined Charlotte should never be alone with her mother. George and Caroline’s quarrels were public knowledge – the Prince instigated more than one investigation into his wife’s morals, while living openly with his mistress, and Princess Caroline’s own behaviour was less than discreet. The country took sides, and Charlotte became for many the focus of future hopes for the monarchy.

Expectations of the young Princess were high. Judging her education and training to be of some importance, her grandfather George III appointed John Fisher, later Bishop of Salisbury, as her ‘preceptor’ and the Reverend George Frederick Nott as ‘sub-preceptor’.  Nott was responsible for  religious instruction, Latin, English and ancient history. 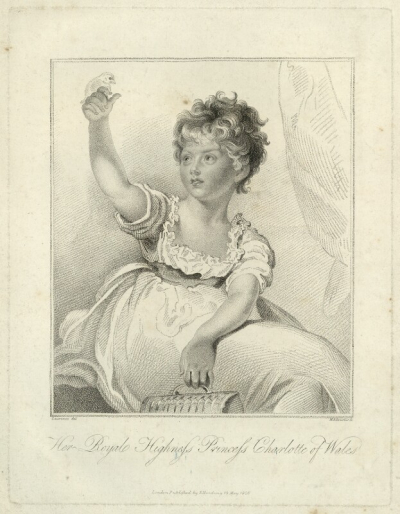 The Library has recently acquired 31 letters from the young Princess Charlotte to Mr Nott, written between 1805 and 1808 when she was aged 9 to 12 (Papers of John Fisher, Bishop of Salisbury, Add MS 89259). Nott was a regular visitor to Warwick House, where Charlotte lived alone with her appointed carers. As the letters show, he was an important figure in the Princess’s life. The letters are signed affectionately; she enquires anxiously after his health; she even ‘wishes he were here’. 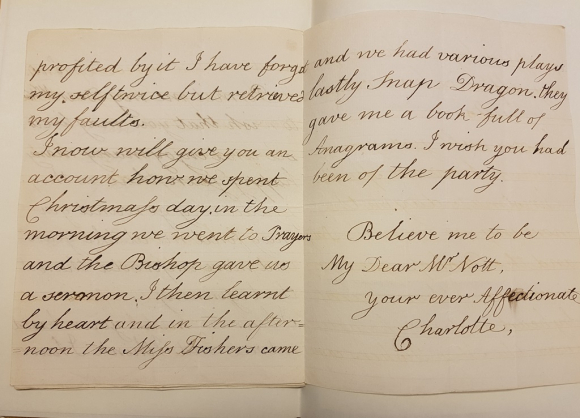 But things didn’t always go smoothly. Charlotte’s school work and behaviour often fell short. Contemporary accounts describe her as lively and rebellious. There are tales of her throwing the Bishop’s wig into the fireplace, standing behind him imitating his mannerisms, and getting up to mischief with her young playmate George Keppel. What’s more, writing and spelling were not her strong suit. Nott had many occasions to rebuke Charlotte, prompting pained expressions of contrition on her part. 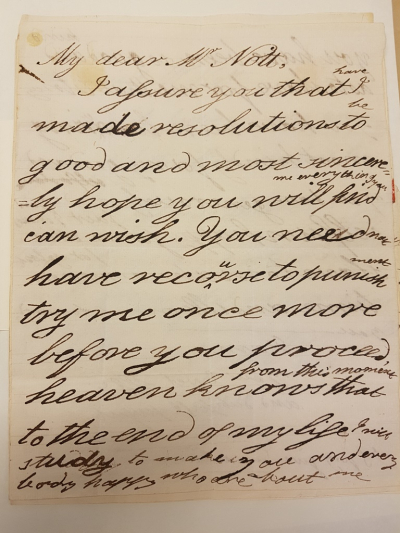 Were these authentic expressions of remorse, or was the young Princess simply playing the game? She was sincere, she protested, time and again. 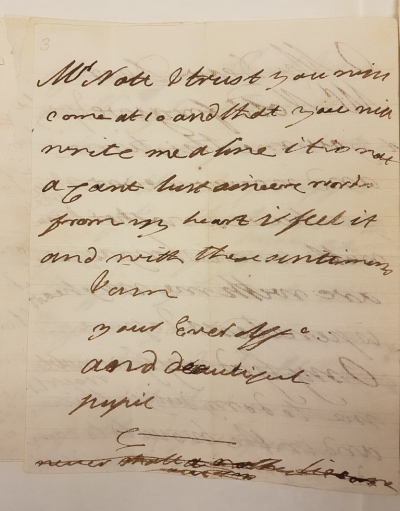 Charlotte’s letters show a childish mixture of spontaneity (‘do, do forgive me my dear Mr Nott’), and amusingly formal turns of phrase (‘Feeling conscious my dear Mr Nott how much I must appear to deserve your reproaches for my long silence’, 26 August 1807). The same variety is seen in her handwriting – sometimes careful, at other times hastily scrawled and crossed out. As Charlotte’s epistolary style matures over the four years, we also see her best handwriting gradually evolve from round, carefully formed letters to a rapid, rather spidery hand.

These letters, in Charlotte’s own hand, breathe life into her story. She may never have excelled at ‘Lattin’, but the strength of feeling evident in the letters foreshadows the determination she would display a few years later, when steadfastly refusing to marry against her own inclination.

Posted by Catherine Angerson at 08:30:00 in Georgians-revealed , Manuscripts , Modern history