‘Inflammable material’ in the British Library

‘The amount of inflammable material in all the advanced countries of the world is increasing so speedily, and the conflagration is so clearly spreading to most Asian countries which only yesterday were in a state of deep slumber, that the intensification of international bourgeois reaction and the aggravation of every single national revolution are absolutely inevitable.’

Stored in the Asian and African collections of the British Library is a cache of material banned in colonial India. Consisting of more than 2800 items, it constitutes one of the largest archives of primary sources relating to any 20th-century independence movement.  The period during which these works were collected, 1907-1947, covers two world wars, revolts and autonomy movements across the world, and the texts in this archive often register these events.

The 1898 Code of Criminal Procedure had defined ‘seditious material’ as that likely to incite ‘disaffection’ towards the Government of India or ‘class hatred’ between India’s different communities, thus setting the two main grounds for proscription during this period. The 1910 Press Act reinforced this by requiring publishers to pay a security deposit of up to Rs 5000,  which would be forfeited if any document was found to contain ‘words, signs or visible representations’ likely to incite sedition. But this did not prevent circulation of publications printed overseas, the ‘inflammable material’ described by Lenin, emanating from international publishing centres, and centres of political dissent, in Europe and America.

The British attempted to prevent the entry of this material into India through use of the Sea Customs Act, and by the application of diplomatic pressure. Both instruments were used against William Jennings Bryan’s British Rule in India, a pamphlet written by an American politician who had been won over to the nationalist cause during a trip to India in 1906. This work was republished during the First World War by a San Francisco based Indian revolutionary group, embarrassing the US government, in which Bryan had served as Secretary of State from 1913-1915. 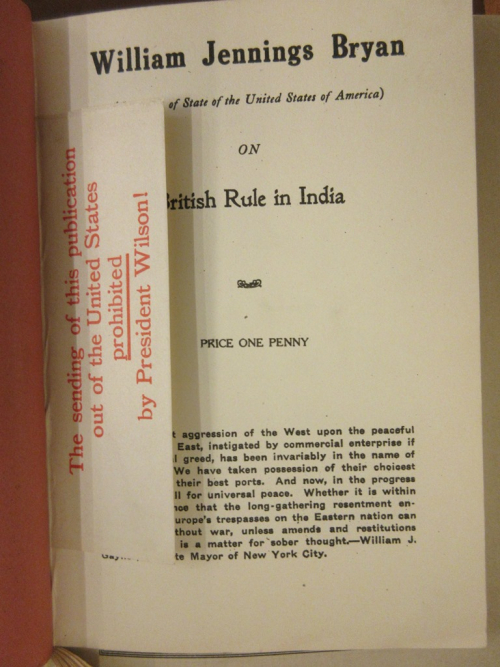 The range of languages into which Bryan’s pamphlet was translated indicates how extensive underground distribution networks were. Their presence in the proscribed publications collection suggests how hard they were to control. The banned English language edition bears the inscription in red ink ‘The sending of this publication out of the United States prohibited by President Wilson!’, and its European language translations repeat this boast. Apart from versions in Urdu and Bengali, there is also what is described as a ‘Tartar’ (sic) edition sent from Stockholm to Shanghai and intercepted on the seas in August 1916. This was produced with Central Powers assistance, and the collection is rich in such material: works in Arabic, Chinese, Persian and Turkish, intended to foment unrest in Allied territory. During a time of global war and national revolt, the best guarantee of ‘the freedom to read’, it seems, was the inability to censor. 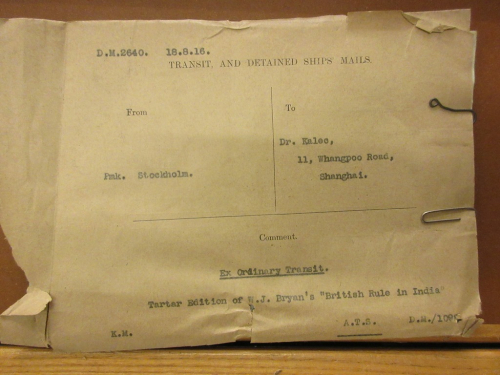 Shaw, Graham and Mary Lloyd (eds.), Publications proscribed by the government of India: a catalogue of the collections in the India Office Library and Records and the Department of Oriental Manuscripts and Printed Books (London: British Library, 1985)

This blog was written by Pragya Dhital for Banned Books Week 2017 (24-30 September). 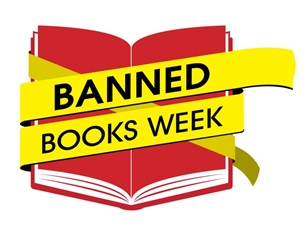 Posted by Catherine Angerson at 8:31 AM