Advice for ladies in India

In 1847 a book called Real Life in India by ‘An Old Resident’ offered advice to British ladies going to live in India. This covered clothing, equipment for the voyage, household management, and ways of passing the time. 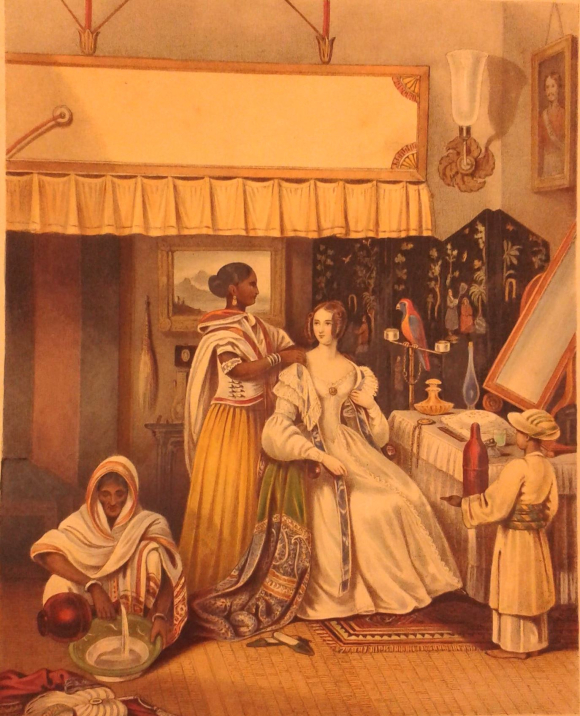 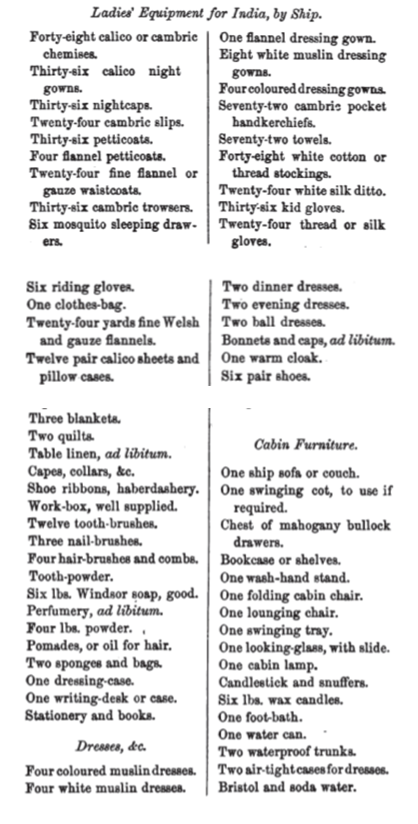 From Real Life in India by An Old Resident (London, 1847)

On first arrival in India, ladies were advised to consult friendly females about the management of domestic affairs.  The ‘Old Resident’ pointed out that a British woman who had been accustomed to performing various household duties would be surprised to find that in India there was nothing for her to do. Everything would be done by the domestic staff. The day’s supplies were purchased by the khansuma (butler) at the market soon after day-break.  Shopping, ‘a source of entertainment and economy in England’, was not an occupation for a lady in India.  An immediate supply of hams, cheeses, or pickles could be obtained by sending a peon with a note to the local store.  Only preparations for the gaieties of the cool season gave ladies an excuse to venture out to visit the milliner or jeweller for new finery.

Ladies could combat the lassitude caused by the Indian climate by reading, painting, music, needlework, intelligent conversation and occasional soirées, or taking a morning and evening promenade.  Our ‘Old Resident’ points out the danger of falling victim to ‘indolent habits and coarse indulgences’: ‘the sylph-like form and delicate features which distinguished the youth of her arrival, are rapidly exchanged for an exterior of which obesity and swarthiness are the prominent characteristics, and the bottle and the hookah become frequent and offensive companions’.

Painting and needlework equipment should be taken out from Britain. Silver knitting needles were best as steel ones tended to rust from the warmth of the hand.  Ladies who were accustomed to riding should take out saddles, bridles and a riding habit as prices were higher in India.

The author ends his chapter devoted to information for ‘the weaker sex’ with detailed advice about the care of pianos in India. He encouraged ladies to learn the art of tuning since piano tuners and instrument repairers were not found at every station in India.