English Nabob amasses a fortune from salt in Bengal

Anselm Beaumont, an apothecary, arrived in Calcutta as a Free Merchant in 1753 with a chest of Mediterranean coral beads valued at £500. He was aged 38. He lost everything in the Siege of 1756 and was appointed a Factor in the East India Company 'because of his honourable conduct and his great losses in the late general calamity'. He was lent £1000 by each of his friends.

By 1759 he had risen to Senior Merchant and was the Provincial Military Store Keeper which included responsibility for the Mint. In 1763 he was appointed Resident in Midnapore with the task of building the new Fort. The British Library holds a transcript of his Letterbooks containing 217 business letters written between April 1763 and his death in 1776. These reveal that his major mercantile concern was the distribution of salt throughout West Bengal, some on his own behalf and some in partnership with other East India Company officials. A reasonable estimate is that he was distributing at least 10,000 tons a year making a profit of £10,000. He also dealt in opium for China, precious stones and coral imported from leading London jewellers and Indian textiles for export to England, as well as many other commodities. 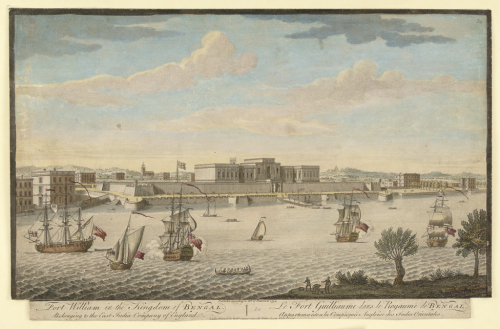 He returned to England in 1765 with a fortune probably exceeding £70,000 since he bought Cheadle Park in Staffordshire for £30,000 as a buy-to-let investment. He had considerable problems in recovering his assets when the EIC stopped issuing company bills, resorting to French bills, diamonds and even a respondentia bond on a camel caravan between Basra and Aleppo. He was a close friend of Robert Clive, was portrayed in Benjamin West’s portrait of 'Lord Clive receiving the Grant of the Diwani', and accompanied him in 1773-74 on his travels to France and Italy, where Beaumont purchased 24 antique Roman sculptures, some of which were later purchased by Charles Townley and Lyde Browne for their collections. 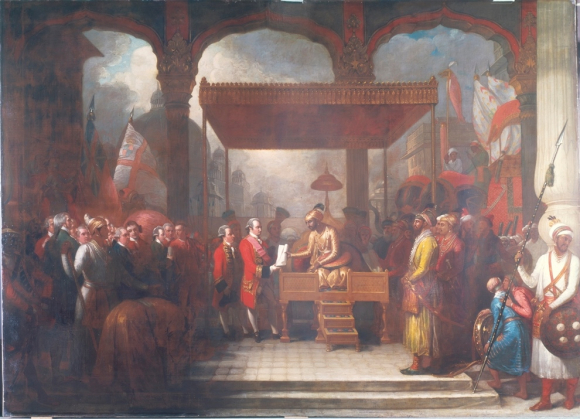 The Grant of the Diwani by Benjamin West, 1818 (Foster 29)
Beaumont is probably shown on the left side of the painting, head and shoulders in a black suit between an Indian in a turban and a young Englishman in red. He was not present at the ceremony but Clive asked for him to be included in the portrait.

The letters do contain some social news. When asked to make arrangements for a Miss Hyett he writes 'We have at present on hand 8 or 9 spinsters of a former importation not yet disposed & many of this year that I fear will be disappointed in their expectations I hope it will not be Miss Hyett’s Case'. Fortunately four months later he was able to write: 'Miss Hyett has not much depended on the Golden Tales she may have heard of Bengal as she thought proper to engage herself to Capt Pigou before her Arrival & was married soon after'. 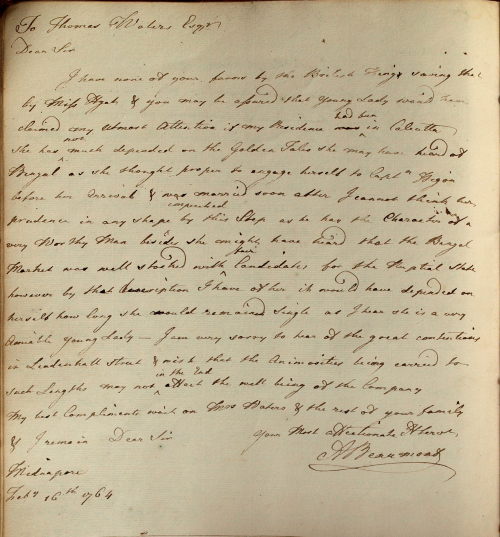 After his death, Beaumont’s 'Household furniture, some pictures, china, fine linen, rich wardrobe and other valuable effects' were auctioned by James Christie in a two-day sale followed by a one day sale of his 'Well chosen library in fine condition'. The catalogues show that the six principal rooms in his Argyle Street house were lavishly furnished and his wardrobe included fifteen silk suits, four waistcoats and 140 shirts, of which 66 had not been worn!

Posted by Catherine Angerson at 9:05 AM