Gardening in the 18th century: a seed shop in North-East England

Gardening became a popular pursuit in the 18th century. The plants to cultivate rose sharply with new varieties flooding in from abroad, mostly sold as seeds. In the 17th and early 18th century, seeds were sold by greengrocers and street tradesmen but gardening’s increasing popularity meant dedicated seed shops were soon springing up. By the late 18th century most provincial towns had at least one seed shop and many had nurseries too. Seeds were advertised in innovative ways. As well as the usual trade-cards, seed catalogues were printed with sale prices and descriptions of each plant. These catalogues were where most gardeners encountered new plants on offer. All of this is evident in the sole surviving copy of a seed catalogue printed in Houghton-le-Spring, a provincial town near Durham, in 1779: A Catalogue of ...Seeds…with their Season of Sowing, Planting and Culture: Chiefly Adapted to the Northern Climates by seeds-man James Clarke, whom we know little about. 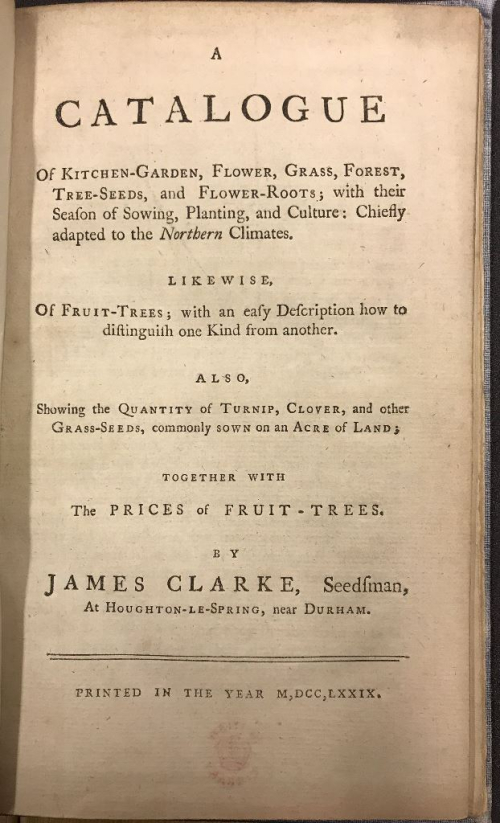 This seed catalogue demonstrates the provincial popularity of gardening and the vastly increased demand for seeds outside London. It reveals what plants were grown in northern climates and, in particular, what new cultivars were successfully sold and grown in 1779. A surprising variety of slightly tender fruit is listed, for example. Amongst the assortment of apricots is the Anson's variety – ‘a kind lately introduced into English gardens’. The Brunswick variety of fig described on page 39 was imported from the Mediterranean during the 18th century and is still a very popular cultivar today. 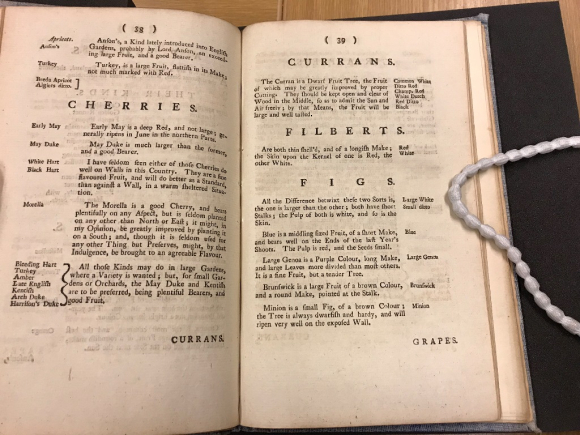 We can also see that gardening was opening up to a wider audience during this period. James Clarke explains in his introductory note that he is ‘deviat[ing] from the common method of seeds catalogues … [his] chief design and wish in this work, is to render the general knowledge of gardening more easily attainable to the young and unexperienced’. He provides thorough guides to growing melons and cucumbers in ‘hot-beds’. Exotic fruits were grown in England long before 1774 but would’ve been a novelty for Clarke’s customers. These guides were indeed unusual. A basic seed list with prices was, as Clarke says, ‘the common method of seeds catalogues’. 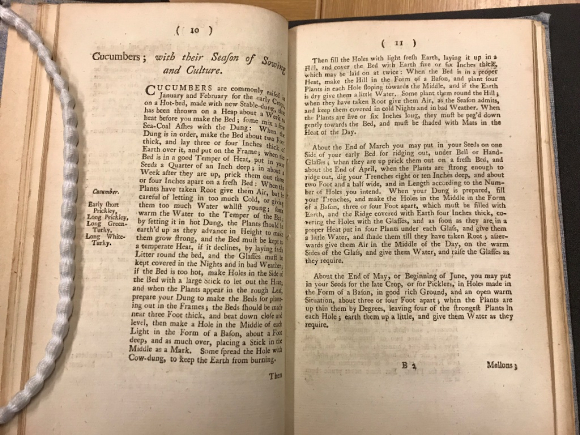 So who was James Clarke? He was clearly a shrewd businessman. Providing planting instructions encouraged amateurs to buy his wares, increasing his profit. It also ensured customer success with their seeds, promoting him as a reputable seller. He has, however, proven difficult to trace. Only a marriage license for James Clarke, Houghton-le-Spring, and Elizabeth Purdy survives from 1770. His designation was ‘gardener’, a general term for all those involved in gardens.

The rise of gardening and its related trades was part of the emergence of consumerism in the late 18th century. Products that were previously seen as essentials were suddenly subject to changing tastes and fashions, fuelling consumer demand and stimulating growth. This little seed catalogue, with its tempting descriptions of growing the latest fashionable exotic crops, is testament to these changes.

Posted by Catherine Angerson at 9:10 AM