The quest for El Dorado

Have you seen Werner Herzog's 1972 film Aguirre, Wrath of God?  Although historically wildly inaccurate, it has always been a hugely popular cult film. TIME magazine included it in its list of 'All-Time 100 Best Films'.  Herzog tells the story of the Spanish descent of the Amazon in 1560 – a quest for El Dorado.

The movie starts well, with the huge expedition winding its way down from Andean foothills to where they built their boats. But the later part of the film, with a handful of men and a horse on a raft, is wrong in every way – the expedition had no horses, hundreds of men, and two or three proper boats.

Spanish explorer from Edward Eggleston, The Household History of the United States and its people (London, 1889) BL flickr

El Dorado was an elusive rich kingdom, now thought to be associated with the Omagua people on the main Amazon near the present Brazilian-Peruvian frontier, rather than in forests east of Quito.  In 1560 a great expedition led by Pedro de Ursúa built boats and embarked on the Amazon in northern Peru. But it found heavy rains, little food, and no wealth. The venture was hijacked by the embittered Basque arquebusier Lope de Aguirre.  Ursúa, his officers, and his beautiful mistress Inéz de Atienza were all murdered.  Aguirre wanted to descend the river as fast as possible, sail up the coast to Venezuela, and then march south to conquer Peru for his band of traitors.  The voyage down the Amazon became a bloodbath, with the paranoid psychopath Aguirre killing a third of the Spaniards and marooning hundreds of native Andean porters.  The story of the expedition was sensational, with El Dorado gold, Amazonian adventure, treachery, sex, class warfare and scores of murders.  But it added almost nothing to knowledge of Amazonian geography or indigenous peoples.

In 1570 Richard Hakluyt published Lopez Vaz's first-hand account of this disastrous descent of the Amazon by Pedro de Ursúa and his murderer Lope de Aguirre.  Hakluyt's English translation of this important source is the only known version, because the Spanish original is lost. 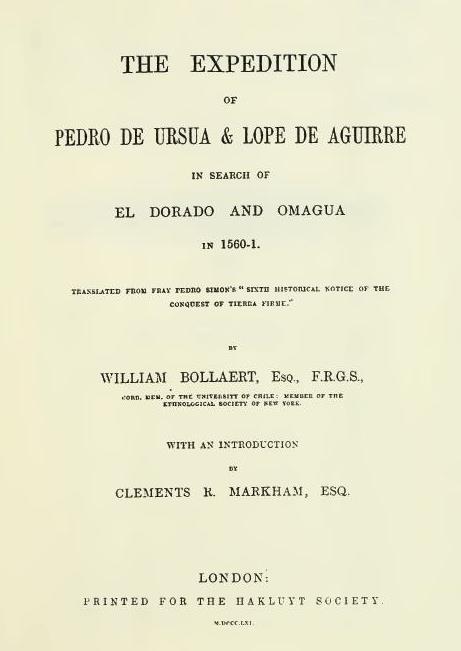 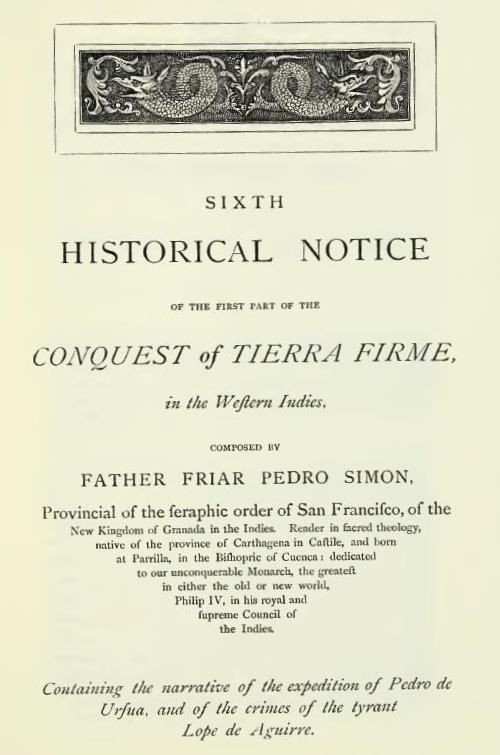 Clements R. Markham wrote a stirring introduction to the Hakluyt Society edition -
‘The blood-stained cruise of the “tyrant Aguirre”… is by far the most extraordinary adventure in search of El Dorado on record.  The dauntless hardihood of those old Spaniards and Germans, who, undismayed by the reverses and sufferings of numerous predecessors, continued to force their way for hundreds of miles into the forest covered wilds, is sufficiently astonishing; but in this cruise of Aguirre all that is wildest, most romantic, most desperate, most appalling in the annals of Spanish enterprise seems to culminate in one wild orgie of madness and blood’.

Further reading:
Richard Hakluyt, The Principall navigations, voiages and discoveries of the English nation (London, 1589) volume 8.
The Expedition of Pedro de Ursua & Lope de Aguirre in Search of El Dorado and Omagua in 1560-1, (from Pedro Simón, Sixth Historical Notice of the Conquest of Tierra Firme), translated by William Bollaert with an introduction by Clements R. Markham, Hakluyt Society, 1 ser., 28, 1861.

Posted by Margaret.Makepeace at 08:30:00 in Americas , Conflict , Journeys