Arabic or English: the Education of a Future Sultan of Muscat and Oman

Born 13 August 1910, Sa‘id bin Taymur bin Faysal al-Bu Sa‘idi was six years old when his father Taymur, the Sultan of Muscat and Oman set out the plan for his schooling. The Sultan sent a special request for Muhammad Rashid Rida in Cairo to help find a suitable tutor to come to Muscat and teach little Sa‘id. 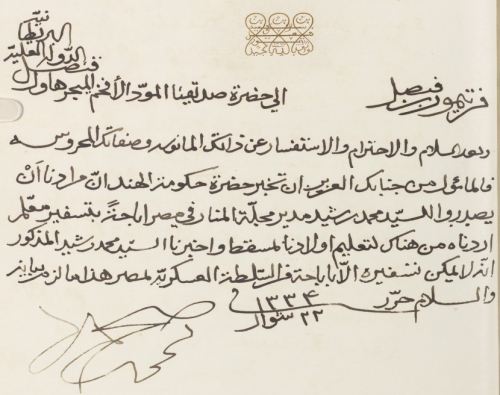 British officials in Cairo and Muscat soon raised concerns regarding the Sultan's correspondence with Rashid Rida. Muhammad Rashid Rida was a well-known early twentieth century Syrian Muslim scholar who was based in Egypt. Editor of the religious paper al-Manar, he was well-known to British authorities for his anti-British sentiment. The British Government was therefore totally opposed to the idea of recruiting a tutor through Rashid Rida, who could easily influence the Sultan's only son and heir. Rashid Rida was quickly ruled out as an option.

The British Government raised further concerns related to the expense of bringing a teacher from Egypt, questioning whether the Sultan’s son should have an Egyptian teacher. The Sultan argued that an Egyptian teacher ‘would be more likely to speak and write Arabic, and to be in touch with Arab sentiment than a man from India’. The early twentieth century witnessed the spread of pan-Arabism and pan-Islamism, which had roots in Egypt and Syria, and the British Government feared the choice of a teacher who might influence the future Sultan with such ideologies. Therefore, they insisted that the choice of the tutor should be controlled by the “Egyptian authorities”. 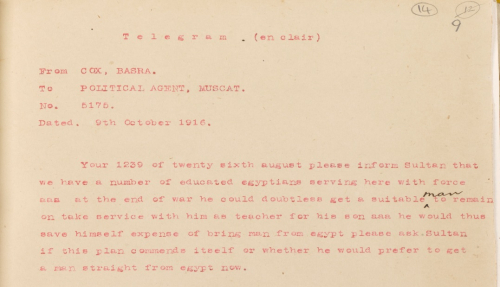 Owing to the war, correspondence regarding this issue was delayed until 1920 when the Political Agent at Muscat suggested that Sa‘id be sent to Mayo College at Ajmer in Rajasthan, India, accompanied by someone who knew both Arabic and English.

Fearing a further delay to the boy’s schooling, the Sultan accepted the suggestion. In February 1922, twelve-year-old Sa‘id started at Mayo College. Ironically, while British officials raised their concerns about the expenses of bringing a teacher from Egypt, they actually paid 3000 Rupees per year in fees at the Mayo College. 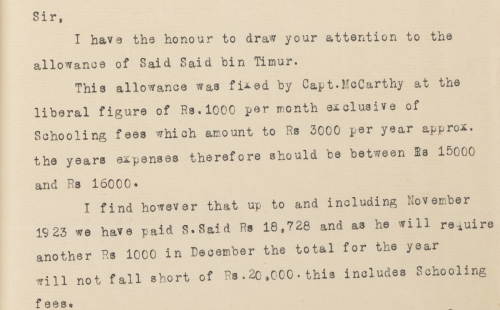 In 1926, the Sultan requested his son’s withdrawal from Mayo College expressing his desire that the boy should be educated in Arabic. The Sultan’s opinion was that, as his son would soon rule over an Arab country, he should learn Arabic at an Arabic school, in an Arab country, preferably Egypt. 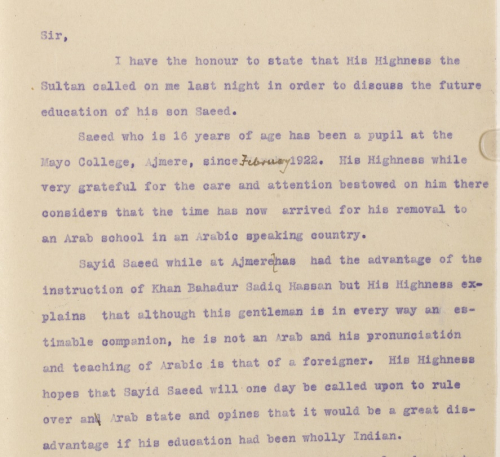 British officials seemed to be finally convinced that Sa‘id should be instructed in Arabic, but were still opposed to his education in Egypt. 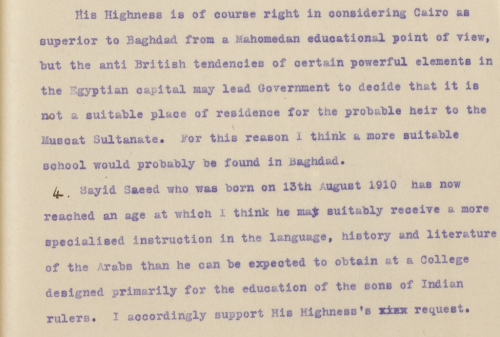 Suggestions were made to send Sa‘id to the American University of Beirut or the American School at Basra. The Sultan rejected the idea, asserting that he was absolutely not interested in sending his son to a school connected in any way with a mission. This time the Sultan won the battle, and in September 1927 Sa‘id bin Taymur bin Faysal al-Bu Sa‘idi started his studies at the Baghdad Secondary School in Iraq. 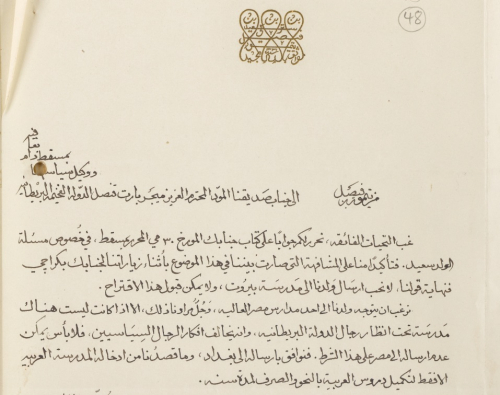