Pyrotechnia, written by a gunner called John Babington, was the first English book about how to make recreational fireworks. It was printed in 1635, seven years before the Civil War. Gunpowder had long been used on the battlefield but, in England, it was only during Elizabeth I’s reign that this technology developed into something that would create fantastic aerial displays. Elizabeth I was famous for her love of fireworks; sumptuous displays were held in her honour and to celebrate military victories. 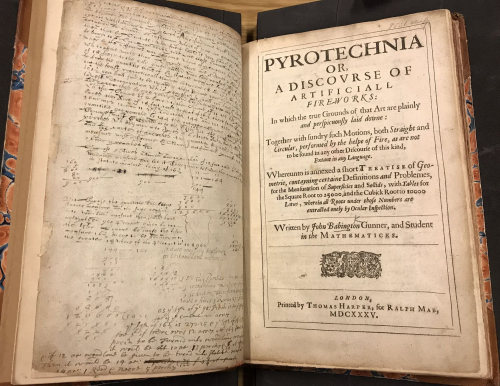 Pyrotechnia told firework-makers all they needed to know about the chemical compounds and complex structural designs required for firework displays. Babington’s instructions are clear, easy to understand and are accompanied by labelled engravings, while the last two sections of the book are helpfully reserved for a treatise on geometry and logarithms respectively. Babington starts simply, with fireworks that are familiar to us today. His is the first printed reference to a roman candle, and there are descriptions of how to make rockets and ‘the best sort of starres’. For stars of a blue colour a combination of gunpowder, saltpetre and sulphur-vive did the trick. He then progresses to making “silver and gold raine”, firework wheels and “fisgigs”, a French firework that fizzed before it exploded.

This was all small fry though. Once a firework-maker had mastered the basics, he could recreate the type of spectacle enjoyed by Elizabeth I. One sight in particular was especially popular during this period: the dragon. 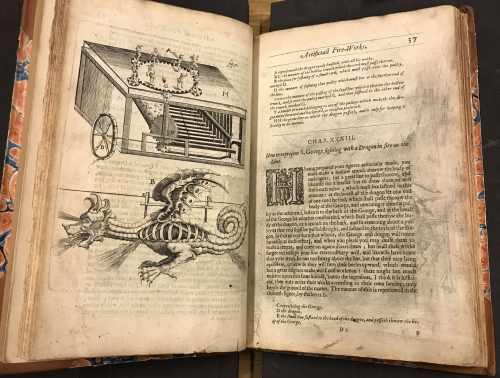 It consisted of a huge wooden frame stuffed with spinners, fountains, firecrackers and rockets that ignited to give the effect of a huge fire-breathing creature. Often, a second dragon or St George would be pitched against it and a mock battle would take place. In Pyrotechnia, Babington instructs the reader to strap the dragon and St George together so that, when a wheel is turned, “[they] will runne furiously at each other”. They had to be well balanced as otherwise “they [would] turn their heeles upward, which would bee a great disgrace to the work and workman”. Babington also acknowledges that “much [has been] written upon this same subject”, confirming the dragon’s popularity. 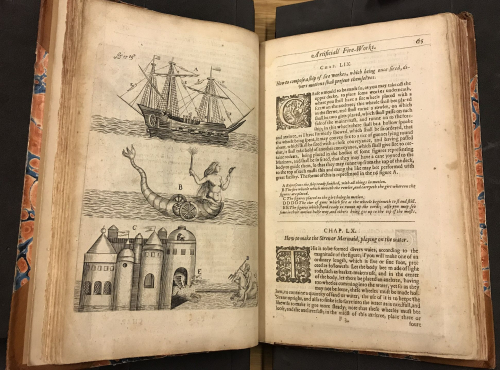 A large proportion of Pyrotechnia is also dedicated to creating fiery spectacles on water, a great skill indeed for any firework-maker. Babington reveals “many workes to be performed on the water”, from “how to make a water ball, which shall burn on the water, with great violence” to a “ship of fire workes” and sirens or mermaids “playing on the water”. 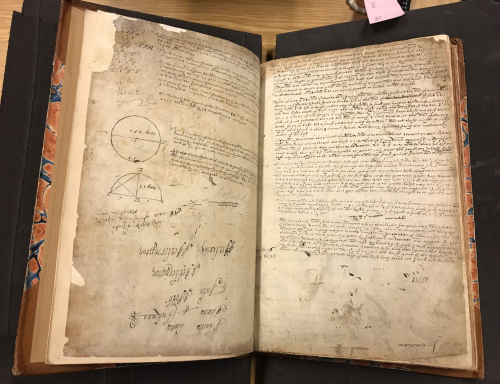 The British Library has three copies of Pyrotechnia. The copy in the photographs above has endpapers with a fantastic assortment of manuscript notes and inscriptions by the book’s 17th-century owner. On the first endpaper, most of an ownership inscription can just about be made out: “Edward Nowle[?] his booke bought…25th January …”. Written arithmetic, diagrams and sums are scrawled over the next two pages. It’s obvious that this book was well-used by its previous owner but were they a firework-maker themselves? Did they create a fire-breathing dragon? I suppose we’ll never know!

Posted by Catherine Angerson at 10:35 AM