Elizabeth Vassall Fox, Lady Holland, is known as the celebrated hostess at Holland House, Kensington. Wife of Whig politician Henry Richard Fox, 3rd Baron Holland, she gathered together the greats of political and literary society for her famous ‘salon’. Their circle were known as the ‘Holland House set’, with the guests being meticulously recorded in her Dinner Books.

Lady Holland kept a journal from 1791 to 1815, documenting her lengthy continental journeys as well as her time in England. She hero worshipped Napoleon Bonaparte, despite her country being at war with him! She preferred male company but had female friends, including other notorious ladies, such as Lady Bessborough, Lady Caroline Lamb and Lady Oxford. Her own scandalous early life, involving adultery during her disastrous first marriage, divorce and an illegitimate child, could have resulted in disgrace but Lady Holland surmounted these obstacles to become a dazzling success in society. 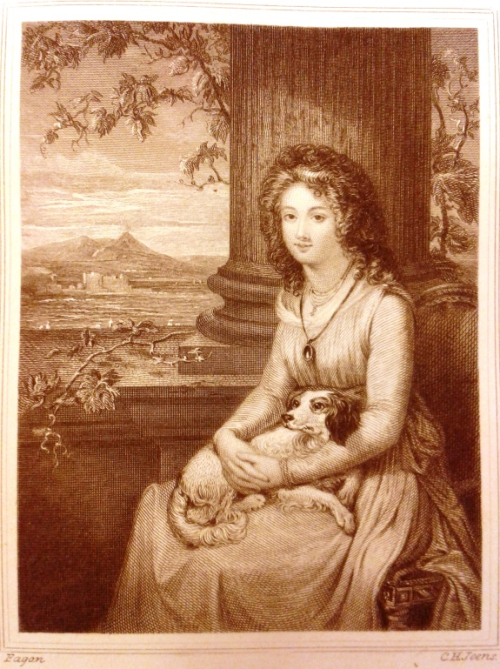 Engraving of the portrait of Elizabeth at Naples in 1793 (Vesuvius in the background) by Robert Fagan © National Portrait Gallery, London

Born in 1771, daughter of Richard Vassall and Mary Clarke, Elizabeth was beautiful, intelligent and vivacious, and heiress to a considerable fortune. Aged fifteen, she was married off to the much older Sir Godfrey Webster, a mismatch made in hell. They had five children. Desperate for foreign travel, she persuaded Webster to take her on a tour of Europe that lasted several years. She ignored her husband, throwing herself into a busy social life and the admiration of many men. One was Thomas Pelham, who remained besotted even after their affair was over, writing to her frequently.

In 1794, in Naples, Elizabeth met the love of her life, Henry Richard Fox. Not quite love at first sight- she disliked his suntan and initially seemed to prefer his friend Lord Granville. But soon they were smitten with each other and inseparable until his death in 1840. 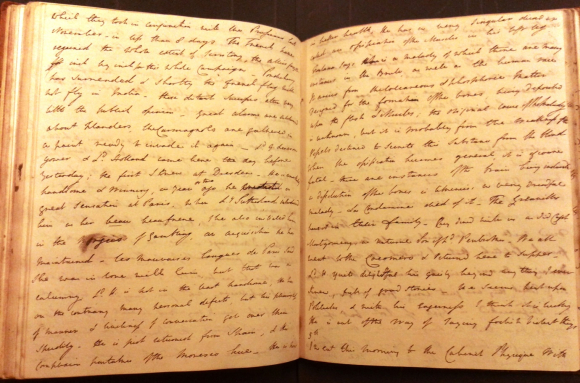 Elizabeth’s first impressions of Lord Holland, from her journal of 3rd February 1794 (Add MS 51927, ff.124v-125). She describes him as “not in the least handsome” and having “many personal defects, but his pleasingness of manner and liveliness of conversation get over them speedily. He has just returned from Spain, and his complexion partakes of the Moresco hue”. She is concerned about his “very complex disorder, called an ossification of the muscles in his left leg”.

She gave birth to Lord Holland’s son, Charles Richard Fox, in November 1796. Webster divorced her on 4 July 1797. He was awarded Elizabeth’s entire fortune of £7000 per annum, £6000 ‘damages’ from Holland and custody of the children. In 1796 Elizabeth had devised a plan to keep hold of at least her daughter Harriet by successfully faking the child’s illness, death and funeral in Italy. The secret came out in 1799 and Harriet was restored to Webster. 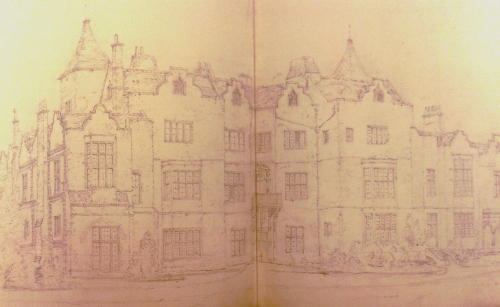 On 6 July 1797 Lady Webster became Lady Holland and settled into her happy second marriage, with further children born. The couple began entertaining on a grand scale, attracting illustrious and numerous guests, and the Holland House set was born. Guests included the Prince of Wales, Whig politicians, literary figures such as Sheridan, Byron, Dickens and Wordsworth, and continental luminaries. 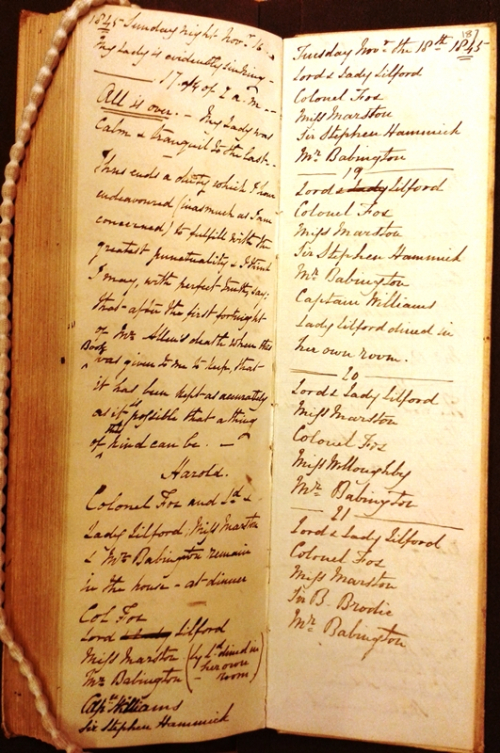 Dinner-book entry for the day Lady Holland died, and those who dined on the following days, written by her devoted servant, Harold Doggett (Add MS 51957, ff.186v-187). He had been writing the records, hence the ‘post mortem’ entries. Lady Lilford is her daughter Mary Elizabeth and Colonel Fox is her son Charles Richard Fox.

Lady Holland had a reputation for being an imperious battle-axe, who alienated people and dominated her husband. The latter showed no objection to her ruling the roost, as long as she didn’t interfere with his politics. She fell out with Lady Caroline Lamb when she objected to the affair her eldest son Godfrey was having with the married, deranged and promiscuous Caroline. Lady Caroline got her revenge by lampooning Elizabeth as the ‘princess of Madagascar’ in her novel Glenarvon. The nickname ‘Old Madagascar’ stuck!

Items relating to Lady Holland, I have touched upon above, are: General Correspondence of (letters to) Lady Holland: Add MS 51845-51856

Earl of Ilchester, The Journal of Elizabeth Lady Holland (1908)