The last will and testament of an Indian wife

It was not unusual for British men working in India in the 18th and early 19th centuries to have Indian wives or companions.  But it was very unusual for these women to leave any written record, for example a last will and testament at their death.  So we were excited to discover a copy will in the India Office Records for Catharine Foy, a ‘Christian native woman’, who died in Calcutta on 4 April 1827 aged 50. 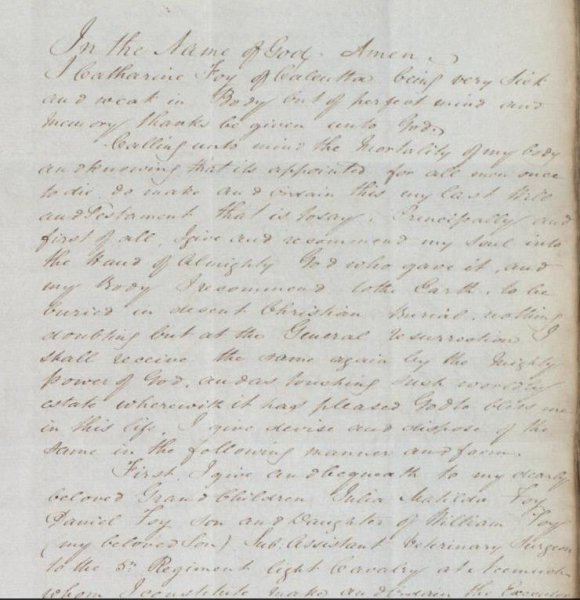 Catharine was the partner of Andrew Foy, an Irish labourer from Dublin who enlisted as a soldier in the East India Company’s Bengal Army in 1792. The couple had two children: Bridget, born in about 1802, and William baptised at Sultanpur on 29 September 1805.

Andrew Foy married Juliana More at Meerut in November 1806. He stated that he was a widower although Catharine was still alive. At the time of her death in 1827 Catharine was living in the barracks at Coolie Bazar, the area of Kolkata just outside Fort William now known as Hastings.

Detail from aquatint of a view of Calcutta from Fort William 1807 engraved by Duburgh, British Library K Top CXV no.46a

Catharine died of cholera at the home of Ann Greene.  She put her mark to the will on the day of her death. Catharine bequeathed a sum of 1,200 sicca rupees held by Alexander & Co and all her personal property in equal shares to her ‘dearly beloved grandchildren’.  Her daughter Bridget was married to Ralph Salt, conductor in the Ordnance Department, and by 1827 they had two sons Samuel Ralph and George.  Catharine’s son William was a sub-assistant veterinary surgeon with the Bengal Army stationed at Neemuch.  He and his wife Mary Connor had two children at this time, Daniel Rodolphus and Elizabeth Matilda (referred to as Julia Matilda in the copy of the will).

William Foy applied for probate of his mother’s will in November 1832 about six months after he returned from duty in the Upper Provinces.  He was now an apothecary at the General Hospital in the Calcutta suburbs. Catharine’s personal belongings consisted of a few clothes and some jewellery valued at about 150 rupees. The estate was shared between the four grandchildren named in the will and those born since it was made.

No mention is made of Andrew Foy in the papers dealing with Catharine’s estate.  Andrew had seven children with Juliana and another five from his subsequent marriage in 1831 to Johanna Hanly (née Bonnar).  He died on 14 December 1839 at Delhi, a conductor in the Bengal Ordnance Commissariat Department.  Andrew’s will made bequests to Johanna and to his children by her, Catharine, and Juliana. 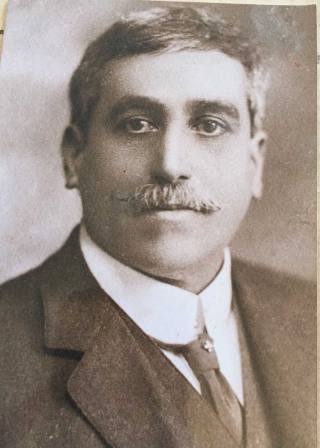 Catharine Foy has a large number of descendants.  Four of Bridget’s six children survived to adulthood; William had eleven children by two wives.  William retired from the Subordinate Medical Service in 1857 and set up as a ‘Practising Physician’ in Calcutta.  Many of the Salts and Foys had careers with the East India Company or India Office, some very distinguished; others went into business and were successful.

This rare document gives a voice to Catharine and allows her to be brought out of the shadows.  By telling us exactly who her children and grandchildren were, Catharine has placed herself firmly in the Foy family tree!

Further reading:
Will of Catharine Foy IOR/L/AG/34/29/51 pp.245-252
Will of Andrew Foy IOR/L/AG/34/29/62 pp.151-156
India Office Records wills, baptisms, marriages and burials have been digitised and are available through the British in India collection on findmypast

The Davisons of Northumberland and Bengal