On Christmas Day 1917 Sergeant Frederick William Spires was serving in the Machine Gun Corps in France.  He wrote a touching letter to the Derby Daily Telegraph, thanking the people of his home town for gifts sent to the soldiers.

‘Through the medium of your paper I should like to thank the Mayor and residents of Derby in the name of all the Derby boys out here now for the little present and good wishes that arrived here yesterday.  Such acts of kindness and thoughtfulness at this season help to take away that dull, lonely feeling that we are all apt to have, for if ever “Tommy” thinks of home it is at Christmas.  This is my fourth in France, so I know that “Christmas feeling” only too well.  The present and good wishes seem to draw Derby a little nearer to us, for we know that we are not forgotten, even in the midst of war-time household worries.  May our efforts really and indeed result in lasting peace, and goodwill, and may it be soon for the sake of the anxious ones at home.  I am sure all Derby Tommies will join me in wishing the old, old Christmas season wish, and that the Mayor and residents will have a brighter New Year.’ 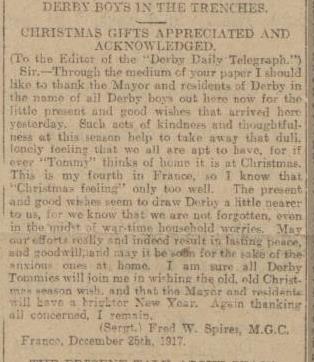 In December 1918, Sergeant Spires wrote another letter to the newspaper from his station at Grantham in Lincolnshire.

‘Through the medium of your paper, I should like, in the name of all “Tommies” of St. Chad’s parish, to thank the parishioners for the small cash present and the kind thoughts and thanks for past sacrifices in the great war.  I’m sure we appreciated all the kindly thoughts. It is pleasant to know that we always stand in the memories of our fellow parishioners, although we have been so long absent.  Our greatest satisfaction lies in the knowledge that what we have done during the past four years and the hardships we have endured have not been in vain, and the war has come to the satisfactory end that we all fought for.  I, for one (as well as my own brothers), do not regret my four years in France and Belgium.  I think our only regret is that so many of our old chums from boyhood  have been killed in the great fight for right, and are not here to see the result of so great a sacrifice.  May the peace be a lasting peace, and that we shall know no more war.  I sincerely hope that in all homes there will be joyful reunions for the Christmas season, and absent ones will return, though such is not my own luck for this my fifth Christmas. – Again thanking St. Chad’s parishioners, and wishing them a right merry Christmas and the brightest of New Years.’ 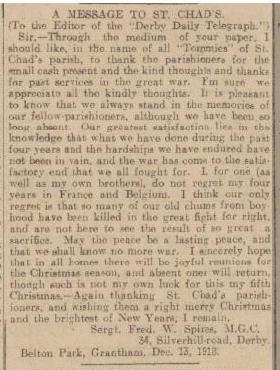 The outbreak of World War II shattered Frederick Spires’ wish for lasting peace.  He re-enlisted and served as a warrant officer in the Sherwood Foresters.  Sadly Frederick died in Derbyshire Royal Infirmary on 9 October 1943 aged 54.  He was buried in the churchyard at Findern and his grave is marked by a military memorial. 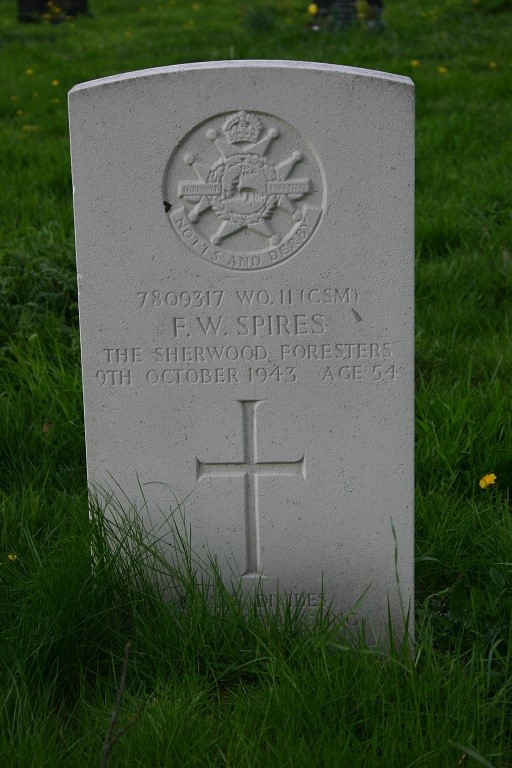