Imagine it is December 1858.  A few months ago, the East India Company was replaced by the India Office, a department of state.  Many matters have to be resolved in this period of transition. One issue is whether the India Office will continue the Company custom of distributing Christmas boxes and making charitable donations

George Shipway, head door-keeper at East India House, raised the question of Christmas boxes with the Finance, Home and Public Works Committee.  For many years it had been the Company’s custom to distribute sums amounting to £24 4s 0d.  The money went to about 50 individuals - people connected with the local parish and City ward, tradesmen, servants of East India House, and others. Shipway asked for a continuation of this bounty and was told to make enquiries at other government departments.  He reported back that no Christmas boxes were given the previous year by the General Post Office and the Custom House. The Committee decided that the money should be paid to Shipway in 1858 but the recipients were to be ‘distinctly informed that such grants will not be continued in future’. 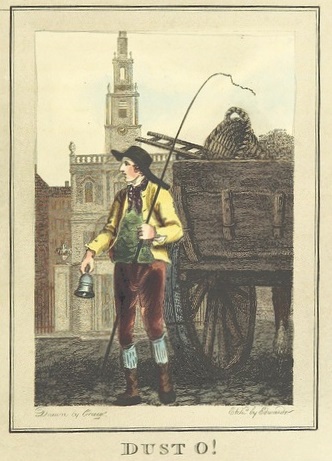 A dustman from Richard Phillips, Modern London; being the history and present state of the British Metropolis (London, 1804)   BL flickr

The Committee was then asked to decide about the Christmas gifts formerly distributed by the India Board.  A total sum of £27 16s had been split amongst office keepers, porters, messengers, bookbinders, newspaper boys, men delivering Parliamentary and Lords’ Papers, dustmen, scavengers, lamplighter, glazier, bricklayer, turncock, plumber, oilman, and charwoman.  It was ordered that the cashier should pay the money requested. Christmas boxes amounting to £48 16s 6d were also granted for the present year to staff at East India House – messengers, firelighters, and the housekeeper and her assistants.

Next came a letter from John George Bonner, head of the Military Store Department.  He listed the donations totalling £3 12s 6d which he had usually made at Christmas and asked about their continuance:  Inquest – Leet Jury; Clerk of St Andrew Undershaft; Ward beadle; Bishopsgate beadle; scavenger; lamplighters at Leadenhall Street and New Street.  It was decided that the money might be given again that year but not afterwards. 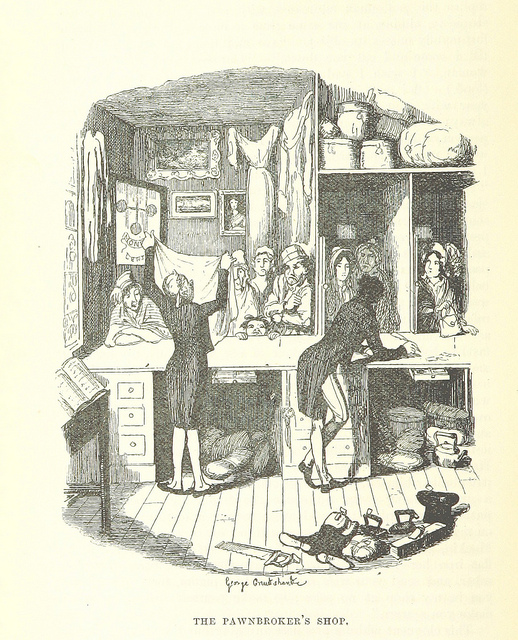 From The Letters of Charles Dickens edited by his sister-in-law and his eldest daughter (London, 1893)  BL flickr

Charities which had received donations from the East India Company were keen to secure the support of the India Office.  In December 1858 the Lime Street Ward Benevolent Fund and Visiting Society based at 126 Leadenhall Street sent its annual report down the road to the India Office.  The Society provided the local poor with coals, potatoes, shoes, blankets, flannel, and bread, and redeemed pledges for clothes and ‘necessaries’ pawned. 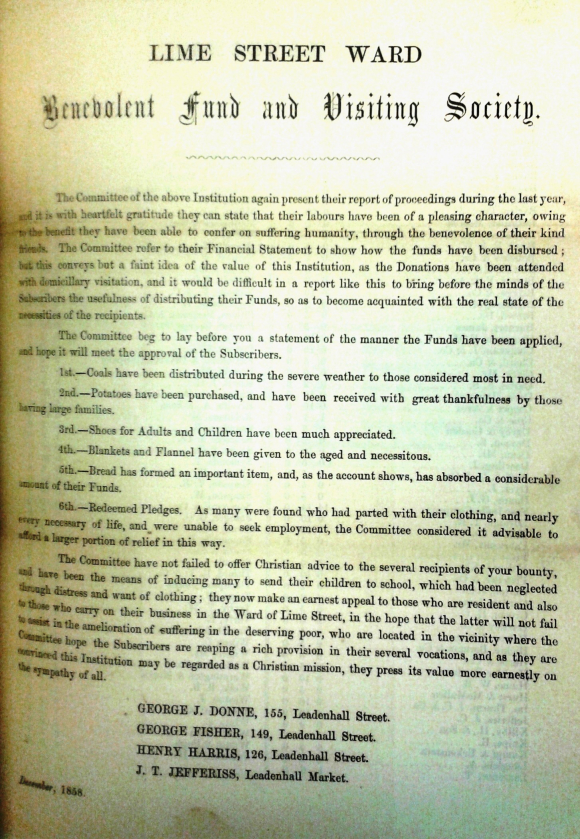 An accompanying letter said that the East India Company had made donations for very many years and that the Society hoped that the Council for India would continue this. There is a pencilled note that the Company had donated 7 guineas half yearly.  The matter was dealt with in person on 15 December but unfortunately there is no record of what answer the charity was given.