The Rani of Jhansi

Lakshmi Bai is probably the most famous woman in modern Indian history.  The widowed Rani of Jhansi was pensioned off in 1854 when the East India Company annexed her state.  She then fought against the British disguised as a man and died at their hands four years later during the Indian ‘Mutiny’.

An account of her death was given in a letter by John Latimer, a member of the Central India Field Force. Writing in camp in Kalpi on 24 June 1858 to his uncle in the UK , he describes the fighting and marches that he and his unit have recently endured.  He goes on to say:

'… a fine looking native woman was killed in the pursuit by a grape shot it is supposed, She was riding a white mare which was also shot, A beautifully limbed and pretty woman she must have been, the Jhansi Ranee is said to be very ugly otherwise we were all inclined to think and even hope it might be her, As it is the matter is likely to remain a mystery (unless some of the big fellows can manage to get some clue as to her identity) '. 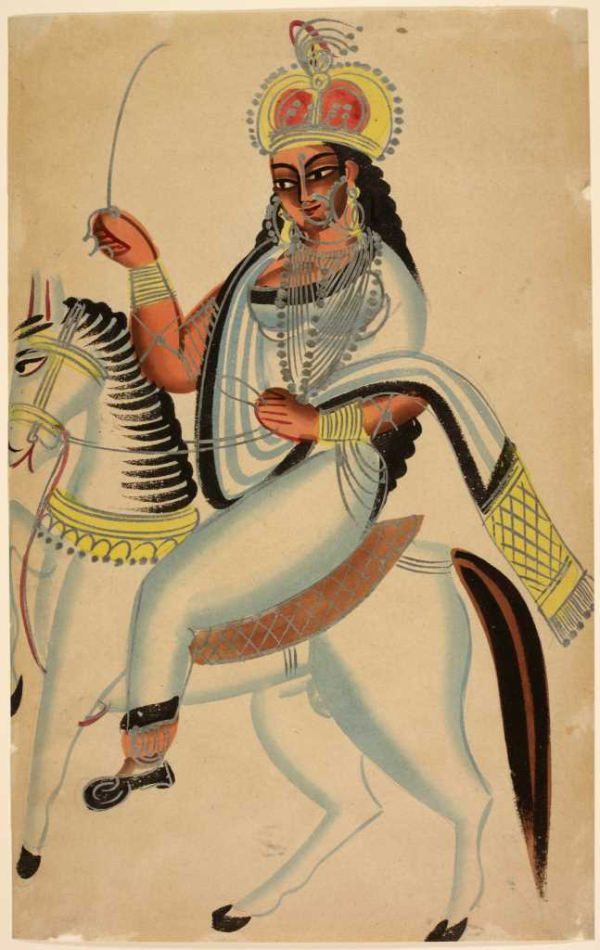 He continues the story in the same letter on 9 July, mentioning her death and the massacre of Europeans at Jhansi thirteen months previously:

'The so called Ranee of Jhansi has been killed at Gwalior.  She seems to have been a brave and determined woman, worthy of a better fate, the cruelties attributed to her at Jhansi, have since been officially contradicted.  Our unhappy countrymen and countrywomen may have been it is true, killed with her sanction, but it is generally believed that she could not have saved them had she wished it, the terrible atrocities attributed to her have been found to have been purely fictitious'.

' … seeing her army broken and defeated, with rage in her heart and tears of veneration in her eyes, she mounted her horse and bent her course towards Gwalior, here her last stand was made, she disdained further flight, and died with a heroism worthy of a better cause, when the storm burst in May last year the mutineers visited her and persuaded her, that the hour had come for the asserting of her rights … Proud and impetuous, she required but little persuasion, she girded on her father’s sword raised the standard of her ancestors and entered the Palace of Jhansi at the head of the troops … Her life has been a brief and eventful one, and gives to the revolt – its only romantic tinge, Whatever opinion the world may entertain regarding her cruelty, her courage shines pre-eminent and can only be equalled, but not eclipsed by that of Joan of Arc . She played for a high game, and even when she found she had losing cards did not despair, but looked defiance [sic] to the last'.

Given the atrocities committed by both sides talk of a 'romantic tinge' seems misplaced, but at least one of Lakshmi Bai’s enemies paid tribute to her undoubted bravery and charisma.

Posted by Margaret.Makepeace at 08:30:00 in South Asia , War , Women's histories