Ensign Charles Kingsley (grandfather of the author of The Water-Babies) was born in 1743. In March 1769 he sailed to Calcutta as a Practitioner Engineer to work on the construction of the new Fort William on a salary of 107 Rupees per month, on the recommendation of Anselm Beaumont, his father’s first cousin. Copies of letters written in 1771-72 show that he was unhappy, having not received the promotion that he had been promised, accidentally losing an eye, and in poor health.

In April 1772 he wrote: “Mr Pinman and I have hired a small house about a mile & a half from the Fort in the Country, there is a Garden containing an Acre of Ground, and a fish Pond in it – The house contains a hall & two rooms, and we propose adding two more with such out-houses and conveniences as may be wanting, which will cost me nothing. I shall here have an opportunity of raising my own Poultry feeding Sheep &c which with the fish Pond & produce of the Garden will enable me to live very reasonably, and I shall be out of the way of that number of people who are always calling in upon you in the Fort, besides this I can put 30 Rupees amount of my allowances of rent into my pocket which will [make] some addition to my present small income”. Two months later he wrote: “The comfortable way of living is already at an end, as I am in orders to proceed the 20 [June] to take the command of the Fort at Budge Budge [about 12 miles down-river from Fort William] – The Garrison consists of 3 Officers, one of Sepoys, a Gentleman to assist me and myself, there are 50 Invalids, 100 Sepoys and 100 Artillery Lascars besides the workmen belonging to the Forts”. In July he wrote: “I am now fixed at Budge Budge as Commanding Officer, Doctor and Parson – I administer Medicines, but neither bleed or amputate, I baptise & bury, but do not read prayers, unless I can get an allowance for it”. 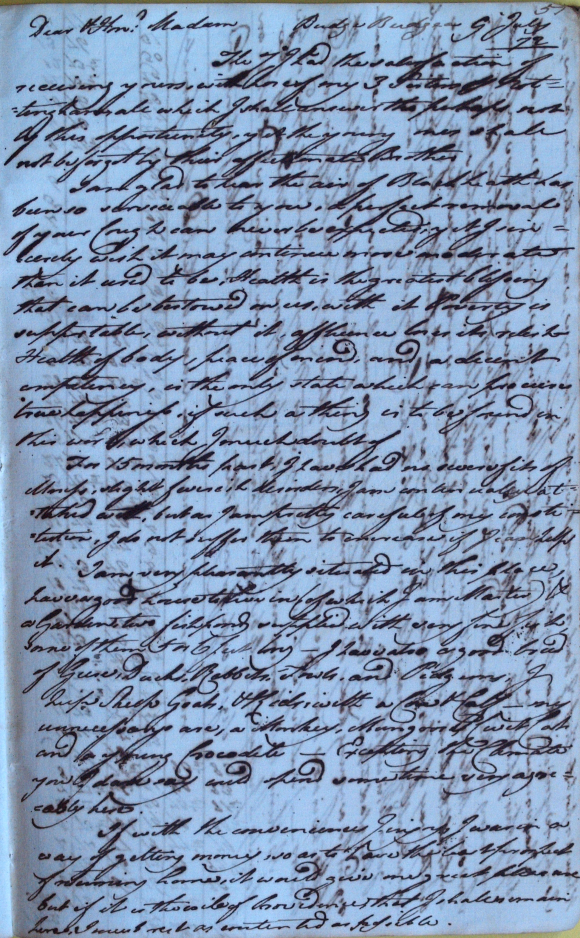 Also in July he wrote “I am very pleasantly situated in this place, have a good house to live in (of which I am Master) & a garden, two fishponds supplied with very fine fish, some of them 5 or 6 feet long – I have also a good breed of Geese, Ducks, Rabbits, Fowls and Pidgeons, I keep Sheep, Goats & Kids with a Cow & Calf – my unnecessarys are a Monkey, Mongoose, Civet Cats and a young Crocodile – Excepting the Climate you I dare say could spend some time very agreeably here”. In August he wrote “My situation is very disagreeable here as at present the Country for many miles around is under water, & will be so for at least a month – the air is hot moist & putrid”.