Documents in the India Office Records shed some light on the story of a flawed Victorian military hero.

The man in question is Edward James Collis, who was serving as a Gunner with the Royal Horse Artillery during the Second Afghan War when an act of near-suicidal bravery gained him the country's highest military honour, the Victoria Cross. The citation in the London Gazette of 17 May 1881 gives brief details of his feat:

' ... during the retreat from Maiwand to Kandahar, on the 28th July 1880, when the officer commanding the battery was endeavouring to bring in a limber [part of a gun carriage], with wounded men, under a cross-fire, in running forward and drawing the enemy's fire on himself, thus taking off their attention from the limber'. 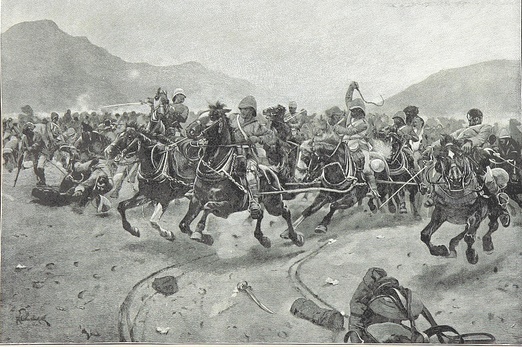 The battle of Maiwand, fought on the previous day, had been a disaster for the British, who lost almost 1,000 officers and men killed in action. As it was deemed impractical to travel back to the UK for the purpose, Collis was presented with the medal at Poona on 11 July 1881 by Sir Frederick Roberts, who had himself won the Victoria Cross during the Indian ‘Mutiny’.

Unfortunately the domestic bliss of the family was not to last. Eight years later, on 6 August 1895, the Assistant Commissioner of Police at New Scotland Yard wrote to the Chief of Police in Bombay. He requested assistance in tracing Mrs Collis, as part of an investigation into a charge of bigamy. Collis had left India and married again in Wandsworth on 26 February 1893, his hapless bride having no inkling that he already had a wife and family in far-off Bombay. The un-divorced and still living first Mrs Collis having been located, in November 1895 her errant husband was sentenced to eighteen months’ hard labour.

Contemporary regulations dictated that he was also obliged to forfeit his precious medal which, in a further sad twist, poverty had driven him to pawn. He is thought to be one of only eight individuals who came to be deprived of their Victoria Cross through subsequent dishonourable behaviour. 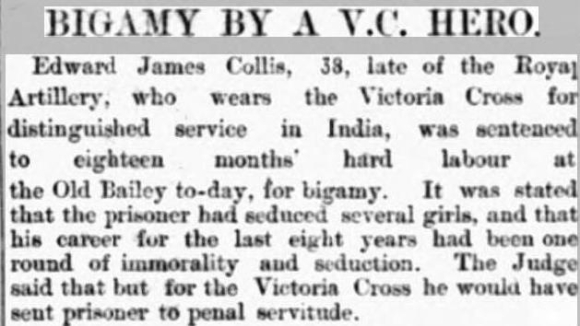 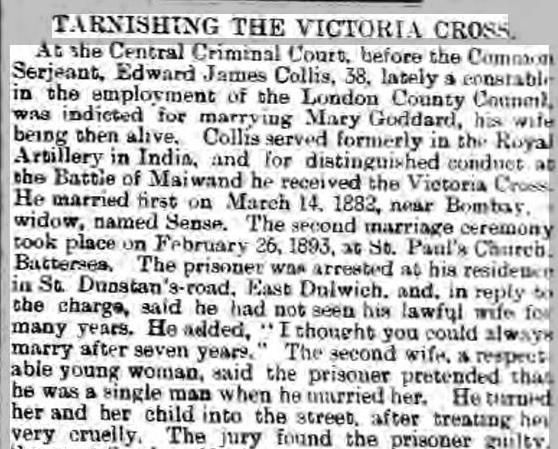 Collis died aged 62 in June 1918, and was buried with full military honours. His medal, which had no doubt brought him both pride and pain, can be seen in the Lord Ashcroft Gallery in the Imperial War Museum.

Further reading:
The Victoria Cross, 1856 – 1920, edited by Sir O'Moore Creagh and E.M. Humphris, - shelfmark OIA355.134.
Correspondence on the Collis bigamy case is in files 2057 & 2081 of the volume IOR/L/PJ/6/409 and press reports can be found in the British Newspaper Archive
Collis’s marriage to Adela and the baptisms of their children can be viewed on the Find My Past website, free of charge in any British Library Reading Room.