Getting into a pickle with translation

Dr Johnson once remarked: ‘It has been a common saying of physicians in England, that a cucumber should be well sliced, and dressed with pepper and vinegar, and then thrown out, as good for nothing'. 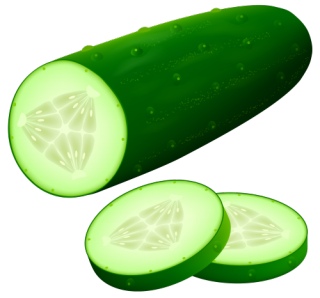 Cucumbers can still be dangerous, however: especially when translating into Arabic.

In 1936 the oil company Petroleum Concessions Limited was negotiating for an option on the right to explore for oil in the Kuwait Neutral Zone, an area on the border between Kuwait and Saudi Arabia over which the Sheikh of Kuwait and the King of Saudi Arabia, Ibn Saud, exercised joint control.

As was usual on such occasions, a formal agreement was required between the ruler (in this case the Sheikh of Kuwait) and the oil company concerned, and the company’s draft version needed first to be translated from English into Arabic for the benefit of the Sheikh and his advisers. As was also usual, the agreement needed to be vetted by the British Government, acting as the overseeing colonial power in Kuwait.

To this end, Britain’s Political Resident in the Persian Gulf, Lieutenant-Colonel Trenchard Fowle, asked the Political Agent in Kuwait, Captain Gerald de Gaury, to run his eye over the Arabic version of the agreement, to see that all was well with the translation. 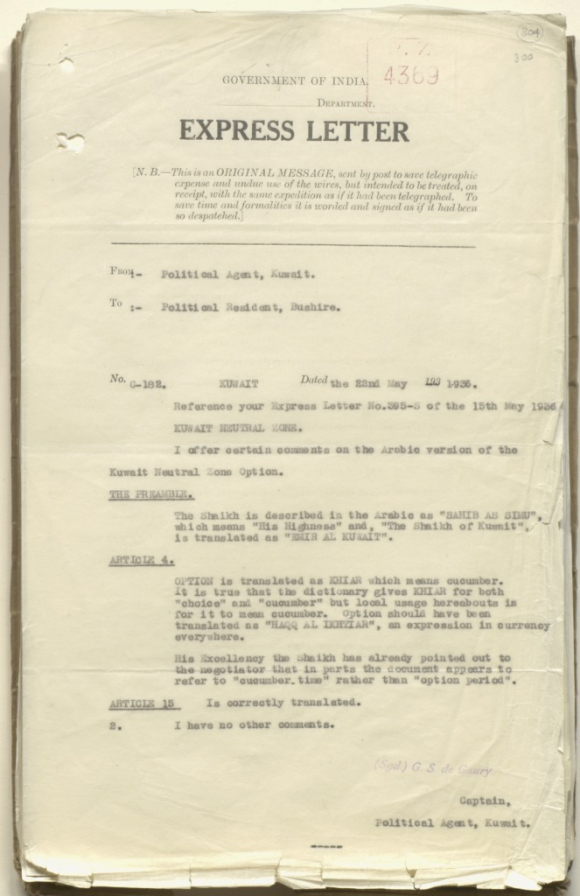 De Gaury wrote back on 22 May as follows: ‘I offer certain comments on the Arabic version of the Kuwait Neutral Zone Option […] ARTICLE 4: OPTION is translated as KHIAR which means cucumber. It is true that the dictionary gives KHIAR for both “choice” and “cucumber” but local usage hereabouts is for it to mean cucumber. Option should have been translated as “HAQQ AL IKHTIAR”, an expression in currency everywhere'.

De Gaury goes on: ‘His Excellency the shaikh [of Kuwait] has already pointed out to the negotiator that in parts the document appears to refer to “cucumber time” rather than “option period”’.

The Political Agent concludes with the words: ‘ARTICLE 15: Is correctly translated [...] I have no other comments.’
De Gaury, in addition to being Britain’s administrator in Kuwait, was a writer who published a number of books on Arabia. His deadpan report on the opening of Kuwait’s first oil well was featured on Untold Lives here.

Even Colonel Fowle, Britain’s top official in Gulf, a man not generally noted in the archives for his sense of humour, was struck by de Gaury’s comments, stating in a letter of 30 May that ‘the “cucumber” touch’ was ‘amusing’.

So the cucumber is after all good for something.

I am grateful to my colleagues Louis Allday for confirming the Arabic translation of ‘KHIAR’ and Matt Griffin for pointing out that the Sheikh of Kuwait’s ‘cucumber time’ is used in a number of countries to mean the ‘silly season’.

Posted by Margaret.Makepeace at 09:00:00 in Middle East , Politics , Qatar