A much married man

Following our stories about cases of bigamy and trigamy, colleagues suggested that I find a man with four wives for an ‘alternative’ Valentine’s Day blog post.  The British Newspaper Archive provided plenty of examples of four wives, and five, six, seven, and more.  I stopped looking when I found a man with twenty wives! 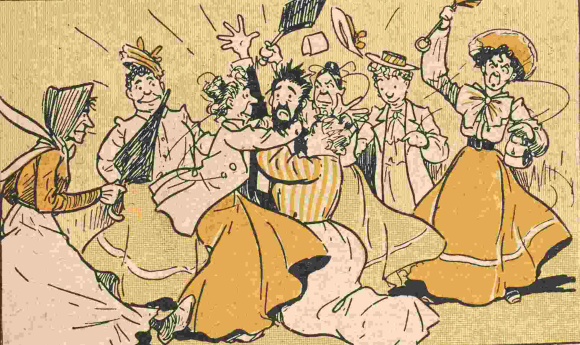 One ‘most sensational’ case stood out from the rest.  Reuben Henry Chandler was born in Bristol in 1849, the son of a cabinet maker.  After leaving school he was apprenticed to an organ builder, then became a joiner before enlisting in the British Army, ‘being of fine physique’.  His father bought him out when he tired of military duties.

In 1870 Reuben married Mary Elizabeth Day in Bristol.  Soon afterwards he went to America and joined the US Navy.  On his return to England he did not rejoin his wife.  Instead he was wed in Bath in 1874 to Harriet Ellen Hales, a married woman who had been deserted by her husband Edwin.  At the time of the 1881 census, Reuben was working as a carpenter in Bath and living with Harriet Ellen and one of her two daughters, a servant, and three lodgers.  Reuben used to leave home for days, and then he disappeared altogether.

Reuben’s next wedding was in July 1885 to Flora Jenkins at St Mary Bitton in Gloucestershire.  The couple settled in Newport Monmouthshire.  In September 1887 Reuben filed a petition for divorce on the grounds of Flora’s adultery with a Richard Hermann, demanding £1000 in damages.

However Reuben and Flora stayed together and in January 1888 were both convicted of letting their coffee house in Newport be used as a brothel.  They then moved to Cardiff where they had a lodger, a master mariner called John Collins.  Reuben helped Flora to pass herself off to Collins as his daughter rather than his wife.  Flora married Collins in 1892 and Reuben attended to give the bride away.

Wedding number four was to Ada Maria Stutt at Bristol June 1898.  Reuben and Ada ran the Lord Chancellor pub on Easton Road until Ada’s death in the summer of 1902 at the age of 29.  Reuben’s stepmother Ann had a dream that her husband’s grave had been disturbed.  She was very upset to discover that Reuben had buried Ada there without her permission and went to the police with Ada’s father to report the multiple marriages. William Stutt wished to claim his dead daughter’s property as her rightful next of kin.

Reuben’s trial took place in November 1902 at Bristol Assizes.  He was charged on three counts for marrying Ada Maria Stutt, Flora Jenkins, and Harriet Ellen Hales whilst his wife was still alive in Bristol.  The judge Mr Justice Wright commented that it was over 30 years since the first marriage, and said he considered the prosecution to be oppressive and ridiculous.  Reuben was found not guilty.

Reuben then moved to London and set up house with Frances Maria Wheeler.  I can find no evidence that the couple married.  They had twelve children, the last born five months after Reuben died in July 1922 at the age of 73 after a most eventful life.