'A Prospect of Fort St.George and Plan of the city of Madras'

The 'Prospect of Fort St.George’  was commissioned by  Thomas Pitt, governor 1698-1709, but was only completed after his death in 1726. The sheet consists of both a prospect (a bird’s eye view sketch of the civic buildings) and an urban plan. The map represents west at the top rather than the left of the sheet, is superbly detailed and very large - over 1 metre wide and ⅔ metre high. 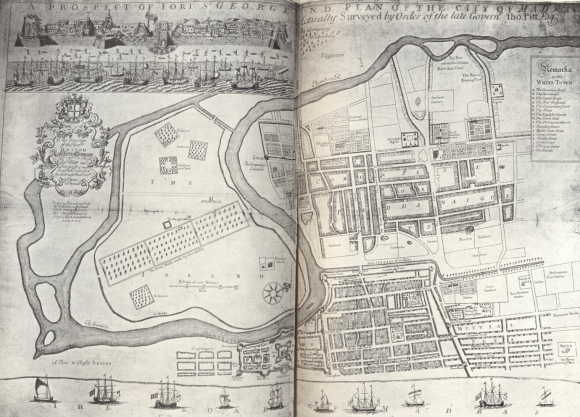 All images are taken from Bodleian Library Gough Maps 41 No. 138 – ‘A prospect of Fort St. George and Plan of the City of Madras actually surveyed by order of the late Governr. T. Pitt ...’ c.1730. Reproduced here with the kind permission of the Bodleian Library.

Fort St. George was, in origin, essentially a fort. The inner citadel was built in 1640, the outer wall and four bastions by 1659, primarily as protection from the ‘inland Enemy’, variously Mughal generals, nawabs, and the rulers of Golconda.  Visitors approved of the fortifications’ height and thickness, although Andrew Cogan was summoned to explain why he had ‘extravagantly and irresponsibly built Fort St George when the Company’s stock was so small’.

The English population in Madras was very small: under 200 at the end of 1699 with 30 servants of the Company, 35 free merchants, and 38 seafaring men not constant inhabitants of the town. There were 14 widows, 10 single young women and 22 wives. The ‘native’ population of the Presidency was however estimated at 300,000 and their influx for work made Madras  a rapidly expanding town. The street names reflect the very active commerce in cloths: Comatee is the Telugu for ‘trader’, and Chitee was a member of any one of the trading castes in southern India.

Let's take a look at some of the features of the plan:

Anchorage at Madras for large ocean-going Indiamen was always problematic.  Ships had to anchor some way from shore, and narrow lighters beat the ferocious surf. 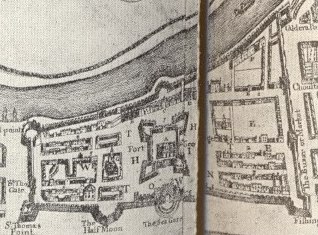 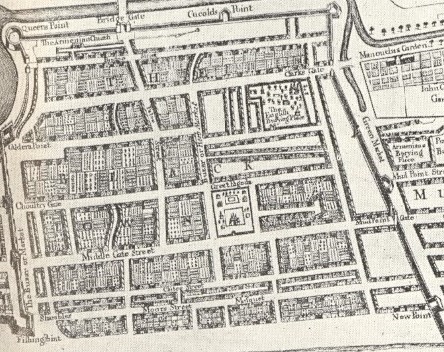 Each community had its own space with a burying ground.  The most basic division of social space was that between Black Town and White Town (reserved for Europeans). Workers such as weavers were actively sought after by the town’s governor, but others came by themselves to avoid the arbitrary rule of the sultans of Golconda. 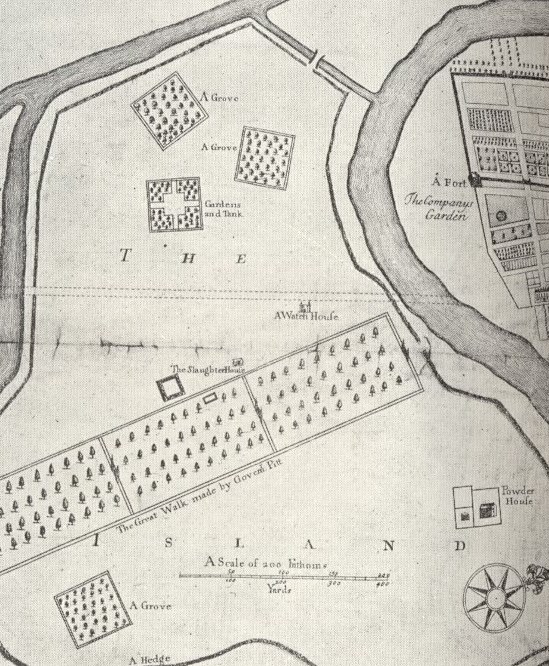 The Inner and Outer Gardens were complemented by the New Gardens in the 1680s, complete with ceremonial garden houses and a pavilion. Pitt was a keen horticulturist. Visitors commented on the variety and healthiness of the guavas, oranges, mangos, grapes, lemons and coconuts grown.

Governor’s House, on three storeys, crenelated into a three-part façade including a central projection, was built in 1693 close on the seaboard walls.

The northern neighbourhood of Muttial Peta was a spillover area populated by urban artisans, such as goldsmiths and blacksmiths, which developed as New Black Town (George Town) in the 1750s. 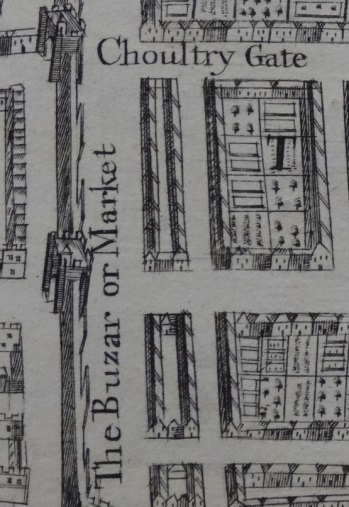 Choultry Street (outside the Choultry Gate) was a place for transacting public business, and included the courts of law. 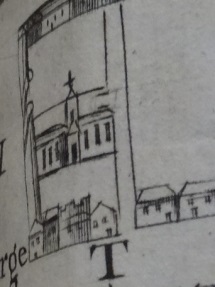 St Mary’s was the chief Anglican church, sometimes jokingly called Westminster Abbey in the East. It was consecrated in 1680 but only received a spire in 1710. Capuchin friars ministered to the Roman Catholic ‘Portuguese’ population in St. Andrew's church until it was torn down after the Treaty of Aix La Chapelle (1748). 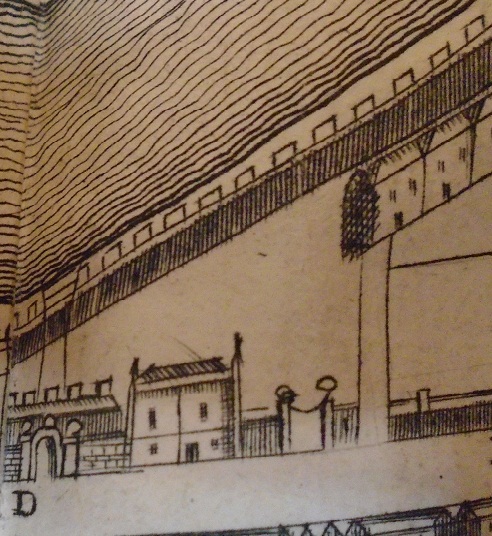 The hospital was purpose built in 1692 and rebuilt in 1710. It was later demolished for defensive reasons because its height was considered excessive. The Mint. Madras’ production of its own coins has prompted discussion about the nature of its sovereignty some time before the idea of empire was consciously put into action by the British. 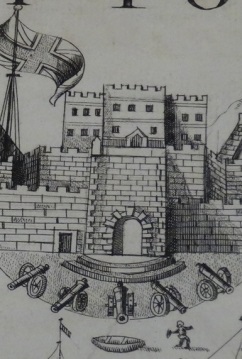 The Sea Gate. Here the keys of the town were handed to the French after the infamous surrender of 1746; here too, returning ships and cargoes were sold at packed, pre-announced auctions.

Further reading:
University of Oxford, Bodleian Library, Gough Maps 41 No.138 – ‘A prospect of Fort St. George and Plan of the City of Madras actually surveyed by order of the late Governor T. Pitt ...’ c.1730.
British Library Maps 54570.(27.) is a collotype reduction from the original document in the Bodleian Library.
British Library - P2524 John Harris, Original copper plate for engraving 'A Prospect of Fort St George', Madras, used in Thomas Pitt's prospect and map of Madras in the Bodleian Library. c 1710. Also P363 - a modern printing of the Prospect  taken in July 1970.