‘Conceal yourself, your foes look for you’: revealing a secret message in a piece of music

At the Battle of Worcester in 1651, Charles Stuart (later Charles II) unsuccessfully tried to reclaim the throne lost through the execution of his father Charles I. He was forced into retreat to avoid capture, and whilst on the run from Cromwell’s New Model Army he stopped at Boscobel House. When the patrols came looking for him, Charles concealed himself in the nearby woods by hiding in a tree, known today as The Royal Oak.

A manuscript newly acquired by the British Library claims to be a coded message passed to Charles at Boscobel by an unnamed lady, warning him of his imminent danger. A small sheet of music which, when folded correctly, reveals the message ‘Conceal yourself your foes look for you’ (Add MS 89288).

The manuscript ended up in the hands of John Port, who said he came into possession of it through his wife, a lady-in-waiting to Queen Charlotte, wife of George III. Port lived out his life in Portland, Dorset after losing the family fortune and left the manuscript in the hands of his landlord, William White.

Also in the British Library is a 19th-century copy of this message (Add MS 45850, f. 68). This manuscript names the author of the message as Jane Lane, who helped Charles escape England by disguising him as her servant.

However, this is not the only story of this code’s origin. Elsewhere, the same cryptograph is said to have been passed to other historical figures.

Walter William Rouse Ball, a mathematician at Trinity College, Cambridge, used a version of the message in his book ‘Mathematical Recreations and Essays’ as an example of a cryptograph. 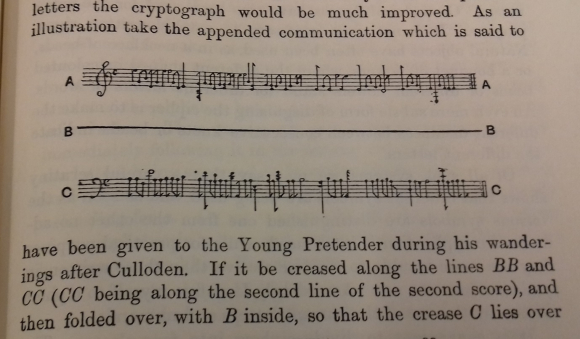 He reports that this was a message to Prince Charles Edward (also known as The Young Pretender and Bonnie Prince Charlie) after the Battle of Culloden, although the author points out, ‘…of the truth of the anecdote I know nothing, and the desirability of concealing himself must have been so patent that it was hardly necessary to communicate it by a cryptograph’.

Another version of this code was apparently given to Napoleon Bonaparte ‘At a period when the Emperor was surrounded by Spies & pretended Friends who had combined with his enemies to betray him’. 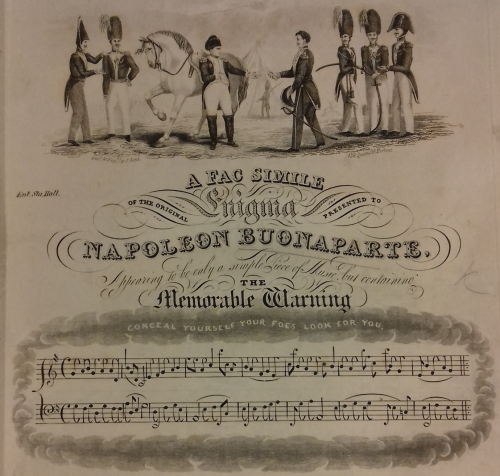 Published in 1830, this facsimile purports to be reproduced from the original held by the Emperor’s son, the Duke of Reichstadt. It claims, when presented with the note, Napoleon ‘…with his usual penetration instantly solved the Enigma & carelessly remarking “Tis pretty Air to caper to” immediately removed to a place of safety’. Why a French soldier would present the French Emperor with a coded message in English we are not informed.

Whilst it may not be possible to verify the true origins of this message, all these items are now available to be viewed in the British Library Reading Rooms for you to make up your own minds.

Readers of this blog may be interested in this forthcoming publication, which discusses the cryptograph: Nadine Akkerman, Invisible Agents: Women and Espionage in Seventeenth-Century Britain (Oxford: Oxford University Press, 2018)

Posted by Catherine Angerson at 09:00:00 in Manuscripts , Modern history , Music