It has to be Perfect!

In May 1945 the Bahrain Petroleum Company Limited (BAPCO) wished to appoint a medical practitioner, and it believed that it had found the perfect candidate in a young Englishman.  His name, appropriately enough, was Dr Perfect (full name: Arthur John Strode Perfect).

However, having provisionally selected Dr Perfect for the position, the company was informed by the War Medical Bureau that the matter would need to be placed before the Central Medical War Committee, which held control over the appointment of British medical professionals during wartime.  Prior to reaching a decision regarding Dr Perfect’s selection, the Central Medical War Committee enquired as to whether BAPCO had advertised the post so that medical officers returning from service in His Majesty’s forces would have the opportunity to apply.  BAPCO reluctantly agreed to place an advertisement in the British Medical Journal, but fearing that an extensive selection process would further delay the appointment of a suitable medical officer, the Company sought permission from the Committee for Dr Perfect to proceed to Bahrain as soon as possible.Having received no reply from the Central Medical War Committee, Hamilton R Ballantyne of BAPCO wrote to the India Office on 20 November 1945, asking for its assistance in the matter.  Ballantyne stated that the post was a young man’s task; he pointed out that the Company had gone to some trouble to select Dr Perfect, whom it felt would meet its requirements, and that it was unlikely that it would change its mind following applications from other practitioners.

The India Office responded quickly, for it had reasons of its own for ensuring the appointment of Dr Perfect.  There was in place a policy to maintain as large a proportion of British employees in the American-owned BAPCO as possible.  In a letter to the Secretary of the Central Medical War Committee, Francis Anthony Kitchener Harrison of the India Office stressed the urgency of the situation.  He warned that any further delay to the appointment could result in BAPCO seeking to secure a medical officer from somewhere other than Britain.  Harrison added that the Secretary of State for India was ‘anxious for political reasons to do what is possible to assist the Company to obtain a British Medical Practitioner for their hospital.’ He asked whether it would not be possible for the formalities relating to Dr Perfect’s appointment by BAPCO to be expedited so that he might be able to leave for Bahrain at an early date. 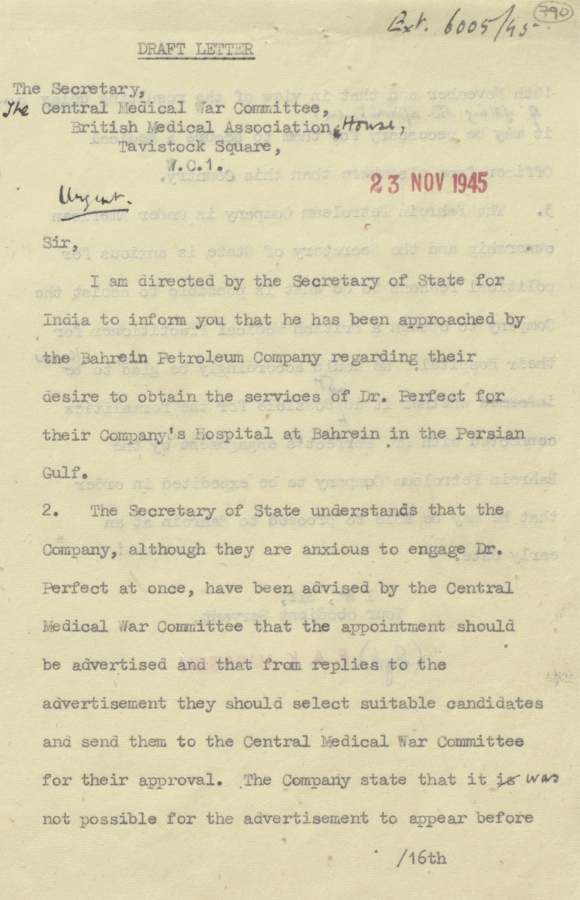 In a swift and brief reply to Harrison’s letter, the Deputy Secretary of the Central Medical War Committee stated that the case of Dr Perfect had been reconsidered and a decision had been made to withdraw the objection to his immediate appointment by BAPCO. Harrison informed Ballantyne of this decision, and Ballantyne replied, remarking that ‘Dr. Perfect is at last released’ and thanking Harrison for his intervention. Dr Perfect was appointed to the position and travelled to Bahrain, where he was later joined by his wife, Mrs Eleanor Perfect, a state registered nurse. 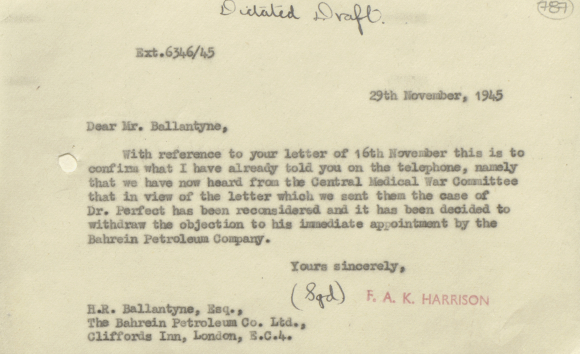