After the defeat of the Ottoman Empire in the First World War, Imam Yahya became ruler of independent northern Yemen, following the Turkish withdrawal in 1918. In August 1919, Colonel Harold Fenton Jacob set off from Aden in command of a British Mission to negotiate with the Imam at Sana’a. The Imam had been aligned with the Turkish during the War, whilst the British had supported his arch-rival, Sayyid Idris. However, Jacob failed to reach the Imam at Sana’a. Instead, Jacob and his Mission were stopped at Bajil, and held virtual prisoners for more than three months by Shaikhs of the Quhra tribe of Tihamah.

News of Jacob’s ill-fated mission was reported by the British Political Resident at Aden in monthly News Letters to the British High Commissioner at Cairo, copies of which are included in the India Office file P 3300/1916 Pt 3 'Aden News-Letters: 1919-20' (IOR/L/PS/10/611/1).

The Political Resident at Aden, C H E Lees, reported on 4 September 1919 that Jacob had sent a telegraph on 27 August stating that he was ‘temporarily held up by the Quhra Shaikhs’. Lees reflected that ‘nearly all the tribes in the Shafiet Tehama are anti-Imam and they are under the impression that our chief aim is to advance the cause of the Imam to their own detriment’, hence the Quhra Shaikhs wanted to prevent British negotiations with the Imam from taking place. Lees reported that anxiety about the safety of the Mission was lessened by efforts of the Imam to secure their release, the Imam’s representative the ex-Vali Mahmud Nadim arriving in Bajil, and ‘the general sanguine tone of Colonel Jacob’s telegrams’. 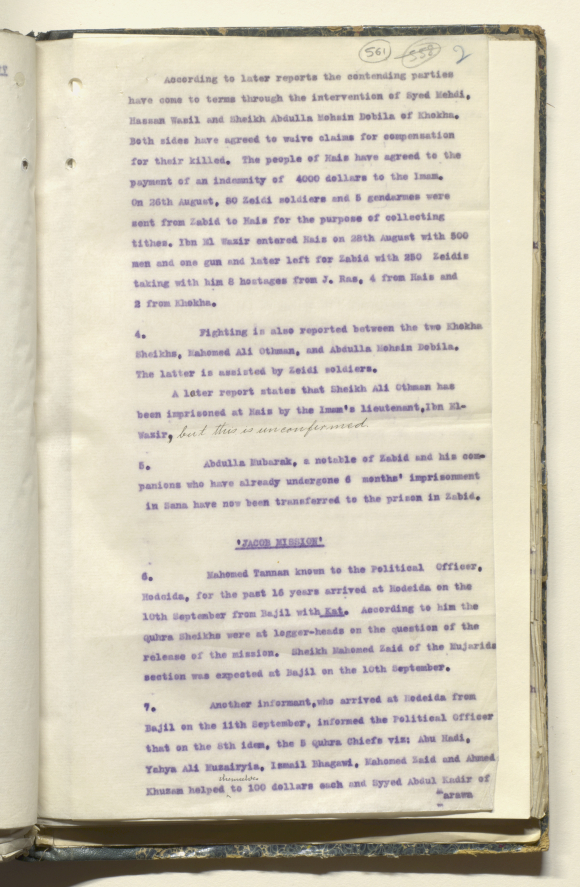 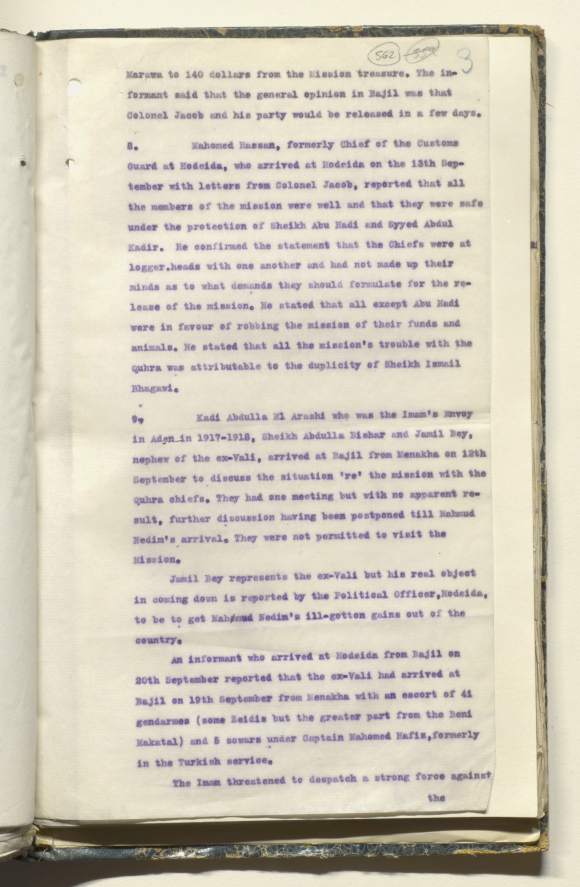 However, on 9 October 1919, the Political Resident at Aden conceded that negotiations for the release of the Mission had made no progress. He grew suspicious of the intentions of Mahmud Nadim, and by 12th November he had come to the conclusion that ‘Everything appears to point to the Wali [Vali], with or without the knowledge of the Imam is uncertain, having engineered the detention of Colonel’s Jacob’s Mission’.

The Mission was finally released on 12th December 1919. This followed two British aeroplane flights over Bajil, which the Political Resident at Aden reported had ‘had an excellent effect and brought before the recalcitrant Shaikhs the fact that they and their villages are within reach of bombing raids’. It also followed the arrival in Bajil of a deputation from Sayyid Idris, demanding the release of the Mission on pain of assault on Bajil by the Idrisi force.

The historian R J Gavin asserts that ‘British impotence in the face of tribal hostility’ during Jacob’s imprisonment ‘amply demonstrated the dangers of a more ambitious policy in the Yemen’. The British reverted to the wartime policy of securing only what was strategically necessary and easy to defend in the Yemen. The British also continued their support of Sayyid Idris, and relations between the British and Imam Yahya deteriorated. Meanwhile, Jacob ‘returned utterly discredited in the sharper eyes of the men in Whitehall’ following the failure of his Mission.